It’s Hack Week time at SUSE! But before we dive into all kind of innovative experiments, let’s take a look to what we achieved during the latest development sprint.

During recent weeks, the AutoYaST version for the upcoming SLE 15 family has received quite some love regarding the integration with the new storage layer, from fixing bugs to adding some missing (and even some new) features. So let’s have a look at what we have done so far.

First of all, a new error reporting mechanism will debut in the upcoming AutoYaST version. Until now, when a problem occurred during partitioning, you got a message like “Error while configuring partitions. Try again.“. It does not help at all, right? At that point, you were on your own to find out the problem.

Now AutoYaST is able to identify and report different problems to the user in a convenient way. What is more, in many situations it is even able to point to the offending section of the AutoYaST profile. 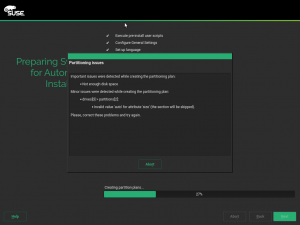 The error reporting mechanism can distinguish between two different kind of issues: warnings and errors. When a warning is detected, a message is shown to the user but the installation will not be stopped (it honors the settings in the <reporting> section). Errors, on the other hand, will block the installation entirely.

Please, bear in mind that this error reporting mechanism is only available for the <partitioning> section. Maybe it could be extended in the future to cover other parts of the auto-installation process.

When defining a partitioning schema, you can let AutoYaST decide which device should be used for installation. Thanks to that, you can use the same profile to install machines with, for instance, different storage devices kernel names (like /dev/sda and /dev/vda).

Needless to say that, in such a situation, we might want to influence the decision process. For example, we would like to avoid considering USB devices for installation. AutoYaST offers a feature known as skip lists which allow the user to filter out devices using properties like name, driver, size, etc.

Unfortunately, skip lists support in SLE 15 Beta1 is rather limited. But these days we have extended yast2-storage-ng to offer additional hardware information and now AutoYaST is able to use it to filter devices. 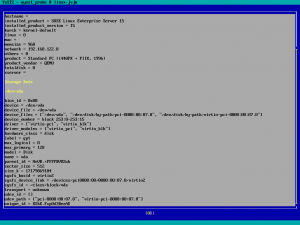 As a side effect, the ayast_probe client has been fixed to show (again) which keys you can use in your skip lists.

Apart of adding or bringing back features, we have fixed several bugs. You can check the recent entries in the yast2-storage-ng changes file if you are interested in the details.

We know that a few features are still missing and more bugs should be addressed sooner or later, but hopefully AutoYaST must work in most use cases.

This sprint we also continued implementing the upgrade from SUSE Linux Enterprise (SLE) 12 products to the version 15. Particularly we solved the upgrade of unregistered systems.

In that case you need the “SLE15 Installer” medium and additionally also the “SLE 15 Packages” medium. The installer medium contains only the minimal packages for installing just a very minimal system. The rest is available either via the registration server or via the extra medium. Obviously for unregistered systems only the second option makes sense.

In this sprint we were focused on making all pieces to work together. You can see the result in the following screencast.

Fixed an installer crash in systems with 512MB RAM

We got a bug report that the beta version of the upcoming SUSE Linux Enterprise Server 15 was sometimes crashing during installation on a system with 512MB RAM. That’s bad, the 512MB is a required limit which should be enough to install a minimal system in text mode.

At first we thought that the crash was caused by insufficient memory, but the reported memory usage was OK, there was still enough free memory.

It turned out that the problem was in the pkg-bindings which tried to evaluate undefined callback function. The fix was quite simple, however, the question was why that happened only in systems with 512MB RAM and not when there was more memory.

Later we found out that the difference was caused by the extra inst-sys cleanup (mentioned in the Sprint 22 report) which YaST runs when there is low memory. In that case YaST removed the libzypp raw repository metadata cache. The assumption was that when the data is already parsed and cached in the binary solv cache the original files are not needed anymore. However, libzypp still might use some raw files later.

So we changed the inst-sys cleanup algorithm to remove only the files which we know are not needed later and keep the rest untouched.

Expert partitioner: some boys are back in town

Several features have been brought back to the expert partitioner during this sprint. 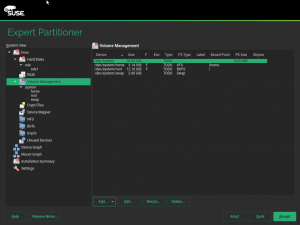 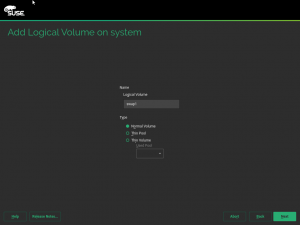 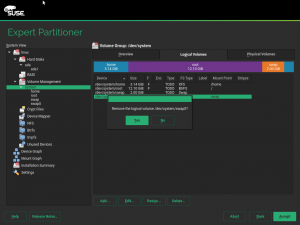 Delete action has been also implemented for MD RAIDs. For that reason, you have a delete button in the RAID overview and also when you access to a specific MD RAID. And of course, you will be asked for confirmation before removing the device. 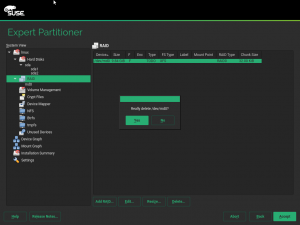 Additionally, another important feature recovered during this sprint is the possibility to work with multipath devices. Now, multipaths are listed together with other disks in the tree view of the expert partitioner, allowing you to manage them as regular disks. For example, you can create or remove partitions over them. Moreover, when a multipath device is selected, a new tab is showed to list the so-called “wires” that belong to the multipath. 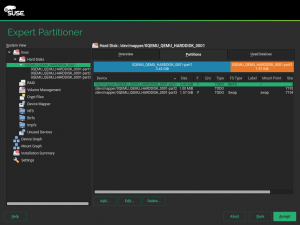 Although the possibility to offer an upgrade option from openSUSE Leap to SLE is on both SUSE and openSUSE radars for the future, the reality is that it has been, and still is, an unsupported scenario.

But with previous versions of SUSE Linux Enterprise, you could take a SLES DVD, boot it in the Upgrade mode, and select to upgrade an openSUSE partition. YaST would let you proceed several screens before telling you that it actually will not let you upgrade from openSUSE to SLES.

Starting with recent SLE15 pre-releases, the incompatible products are filtered out in the partition selector already (overridable with a Show All Partitions checkbox), letting you know earlier whether you will be able to upgrade your system to the new SLES.

Fix of a registration issue during installation process

That removes all traces of previous registration attempts from the Installer. This also means that you might still want to unregister directly at SUSE Customer Center if needed.

As you have seen so far, we have been working hard to polish the registration experience in many aspects and scenarios. That also includes a better communication with the user. Thus, the help text in the registration module has been improved to also include the description of the check box states. This is especially important for the “auto selected” state which is specific to this dialog and is not used anywhere else.

The help texts in YaST use an HTML subset which allows also including images. In this case we included the check box images directly from the UI stylesheet. But in the text mode we have to use text replacement instead of the images. That means the help text content must be created dynamically depending on the current UI.

Here you can see examples of both interfaces. 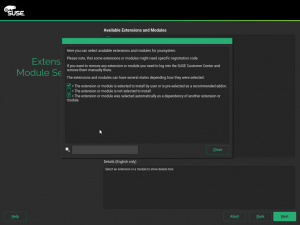 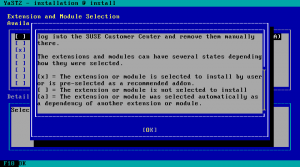 Twisting the storage proposal: this time for real

In our report of sprint 42 (to be precise, in the section titled “Twisting the storage proposal”) we presented our plans to make the software proposal more customizable in a per-product basis and the draft document of the new format for control.xml that would allow release managers to define the installer behavior in that regard.

Now this goes further than a mere specification and the new format is actually being used to define the partitioning proposal of both the KVM/Xen role of SUSE Linux Enterprise 15 and the upcoming SLE15-based CaaSP.

In the following screenshot you can see the corresponding step of the guided setup for the mentioned KVM/Xen role, in which the classical controls for the /home and Swap partitions have been replaced by more goal-specific volumes defined in the section of the control file describing the role. 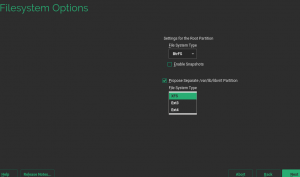 And, as you can see below, the installer now honors those settings to propose a reasonable partition layout.

The new format and the corresponding implementation of both the logic and the UI are flexible enough to empower the release managers to define all kind of products and to make possible for everybody to create a more customized derivative of openSUSE without renouncing to the power of the automatic proposal. See another example below (not corresponding to any product or derivative planned in the short term) with more possibilities and note how the wording was automatically adapted to talk about LVM volumes instead of partitions, based on the user choice in a previous step. 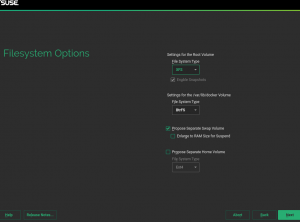 Chrony will replace the classical ntpd as default NTP client starting with SLE15 and openSUSE Leap 15. That will offer several advantages to system administrators and other users, as can be seen in this comparison. In order to make this replacement possible, we started a research to find out what is supported in Chrony and how to allow our users to configure it through YaST.

The research phase is now complete and we have already a plan to proceed with the adaptation of the existing yast2-ntp-client module. Also a few bits of code, which allows to set the NTP service during installation, are now in a feature branch (so not yet in Tumbleweed).

The next step will be a huge improvement (and simplification) of the YaST module, which will go further than adapting a list of options. In the screenshot below you can see the not yet finished prototype in action. 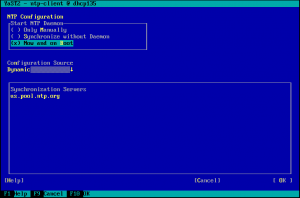 Configuring the keyboard in the installer via systemd

Originally the keyboard configuration was written directly by YaST in the corresponding Systemd-related configuration files. But we got a bug report that YaST should not touch the config directly and rather call the localectl tool for changing it. (See the details in the localectl man page).

However, this works only in the installed system, it does not work in the system installation as it needs a running Systemd that is not available during the installation process. Changing the setting for a not running system must be done using the systemd-firstboot command.

But this did not supported modifying the keyboard settings. Fortunately one of the SUSE developer helped us and implemented this feature to Systemd (pull request). Currently the feature is available in (open)SUSE packages but later it will be available in the upstream release for others.

Another related change was that YaST not only set the console keyboard but also constructed the keyboard settings for X11 (GUI). But this is actually a duplicated functionality, localectl itself includes this feature. So we have removed it from YaST and let the localectl tool to set both keyboard setting automatically.

And now for something completely different

Hack Week 0x10 (that is, the 16th edition) is starting just right now. Which means most developers of the YaST team will spend a week working on topics that may or may not have a direct and visible impact in our beloved users in the short term. But hey, maybe we will build a robot or a space rocket!

After that week, we will restart our Scrum activity. So if nothing goes wrong, you will have another update about the YaST development in approximately four weeks. Meanwhile, join us at Hack Week and let’s have a lot of fun together!