On the night of December 5th, teams of three are sprinting through the streets of Czech towns, visiting homes: Mikuláš (the developer), čert (the scrum master), and anděl (the product owner).

On the night of December 5th, teams of three are sprinting through the streets of Czech towns, visiting homes: Mikuláš (the developer), čert (the scrum master), and anděl (the product owner). If you’ve been a bad kid, you will get pieces of coal or brown potatoes. Good kids, on the other hand, will get new YaST features:

The MRI Ruby (the original C implementation) interpreter allows using the jemalloc library for allocating the memory instead of the usual glibc default. The advantage is better memory usage (30-40% less used memory was reported here) and it has some extra debugging features.

But after enabling this feature in Ruby in openSUSE Factory and SLE15 many YaST packages failed to build. It turned out to be an issue caused by dynamically loading the library by YaST. A workaround was to directly link the YaST against libjemalloc.

Later we found out that some packages still do not build. This time the problem was caused by a warning printed by the library on the error output. That happened only when running the old YaST test suite which still uses an embedded Ruby interpreter (normal YaST usage or the new unit tests use full Ruby which does not have this problem). The fix was just to ignore that warning when checking the error output in the tests.

If you want to check whether your Ruby uses the jemalloc feature then run this command:

If the output includes the -ljemalloc option then your Ruby is using the jemalloc library.

Switching NTP from ntpd to chrony

It was decided that it is a good time now to switch the Network Time Protocol (NTP) implementation from ntpd to chrony as it is more secure, nicer and better. So also YaST has to adapt and modify its NTP client module to work with chrony. The module also shows its age and it is a bit hairy, so we took the opportunity to do some cleaning.

The most visible change is the UI on the running system. Please note that the UI is not final yet and it is mostly just a proof of concept. But the goals are clear: The first goal is to be really client only, as previously NTP also allowed to configure an NTP server, making the UI complex and confusing for the majority of users that just want to select a server to sync against. The second goal is to focus on the majority of users who want a simple UI to configure a common NTP client, leaving fine tuning for experts who modify configuration files directly.

In the installer, chrony is now called instead of ntpdate. This change is invisible to users and it simply works the same as previously.

We also decided to drop the command-line interface (CLI) of the NTP client module as chrony itself comes which a nice CLI chronyc. Instead of duplicating the work our CLI just suggests to use chronyc.

Please also note that changes are not finished yet and more will come. One of such changes is AutoYaST support, which is currently just skipped. But let us show you some pictures to get an idea how it will look soon in Tumbleweed and explain our decisions along the way:

The first image is from the main screen. It shows three main areas: 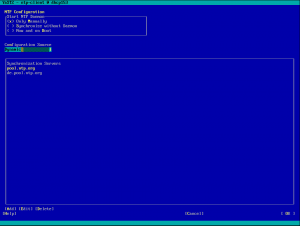 The second image is from the Edit dialog. It was also simplified to the most common options. The Test button allows a quick check if a server is reachable and there are no typos in its address. The Quick Initial Sync option is useful to synchronize time quickly when connected to network. And Starting Offline is a nice chrony feature that allows to define the server as offline during the start-up and only when connected to the network to mark it as online and synchronize. It greatly helps with boot time and is a good option for notebooks where fast boot is important and the network is managed by Network Manager. 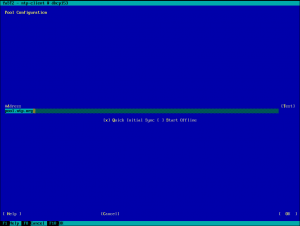 Firewalld will be the default firewall in SLE15 (Installer adapted)

Firewalld has some nice advantages over SuSEFirewall2: it can be dynamically managed, permits more zones, has a separation between runtime and permanent configuration options, it is well maintained, and it is already supported in some applications or libraries.

These are some of the main reasons why it has been decided to replace completely SuSEFirewall2 with firewalld.

In a past sprint report we announced that yast-firewall was adapted to support firewalld, but that was mainly an adaptation of the code to supporting both backends.

During this sprint we have completely replaced SuSEFirewall2 in the installer using a new firewalld API and although the UI seems to not have changed at all, the firewall dialogs have been completely reimplemented using CWM (our object-oriented API to YaST widgets). 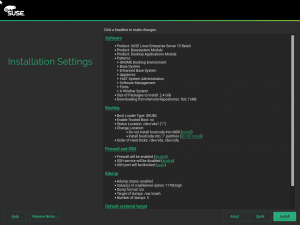 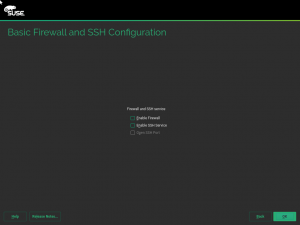 During next sprints we will continue adapting the firewalld API and YaST modules to complete the replacement. The next target will be supporting firewalld in AutoYaST.

The Expert Partitioner has regained the ability to resize partitions. A Resize button is now available in the Hard Disks view as well as in the view of either a particular disk or a specific partition. When you try to resize a partition, a new dialog is shown with three options: maximum size, minimum size and custom size. 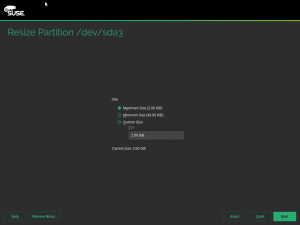 When the Custom Size option is selected, you have to specify manually the new partition size, but do not worry, the Expert Partitioner will prevent you from entering wrong sizes. Also, it will automatically align the partitions for a better performance. 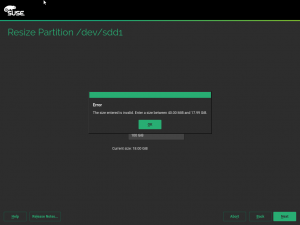 As with partitions, it is now also possible to resize software RAIDs, although in the case of RAIDs resizing is a completely different operation performed by adding or removing devices to it. The partitioner will ensure you have selected the minimum amount of devices necessary for the current RAID type. Take into account that resizing a Software RAID will be only possible for new RAIDs being created, that is, resize action is not allowed when the RAID exists on disk. 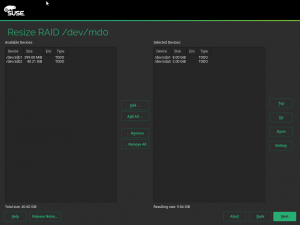 As you can see in that screenshot, buttons for sorting the devices within a RAID have also been added at the right of the device list during this sprint. Those buttons are available both when creating a new RAID and when resizing it.

Last but not least, now it is also possible to work with BIOS RAIDs in the same way you do with regular disks. You will find all BIOS RAIDs in the Hard Disks section of the Expert Partitioner, where you could add or remove partition to the RAID device.

The SLE15 products were split into several repositories and the installation medium contains only the minimal set of packages required to boot the system. If you want to have something more then you have to either register the system or use an additional medium.

To make that easier for users the registration module now pre-selects the recommended modules or extensions. However, if you for some reason really need a minimal system you can still deselect the pre-selected items.

The list of recommended addons is maintained at the server side (SCC) so it is possible to change that without updating the YaST installer.

Adding Modules and Extensions in AutoYaST

The list of available modules and extensions for SLE15 is already quite long as the base SLE15 products have been split into several modules. That makes adding the modules from the registration server more complicated compared to SLE12.

Originally the AutoYaST registered the addons in the XML profile exactly in the specified order. And that made troubles because SCC requires the dependent modules to be registered first. Writing the modules in the correct registration order in the profile was not easy for SLE15.

To make it easier AutoYaST now automatically reorders the modules according to their dependencies and even registers the dependent modules which are missing in the profile. Obviously that works well only if the missing module does not require a registration key.

Starting with SLE15 the installation media have a slightly different layout. In short: the content file that was holding information about the product and a list of checksums is gone and has been replaced by .treeinfo and CHECKSUMS. Also, the package repository is now a repomd repository.

Also, SLE15 has been split into several so-called modules. The installation medium itself contains only a minimal set of packages. You have to register during the installation process to access other modules or use a separate medium containing them.

To save you from carrying several USB sticks around, mksusecd lets you build your own customized installation medium.

First, check what is on the media. The installation iso has just the base product:

and you need an extra image for the modules:

Then pick the modules you want to add to the installation medium:

Now use new.iso to start an installation.

We automatically submit the YaST packages from the Git repositories to the OBS projects using Jenkins. We use two Jenkins instances, the public Jenkins submits to openSUSE Factory/Tumbleweed, the internal Jenkins submits the same packages to SLE15.

The OBS compares the SLE15 packages with the openSUSE version to make sure the same packages are built in both projects. But this check compares only the file checksums, not the archive content.

The problem was that the internal and external Jenkins created a tarball with different checksum although the files inside were exactly same. If you run simple tar cfjv archive.tar.bz2 files you will find out that the tarball checksum is different for each run. So how to create a tarball in a reproducible way?

To build a reproducible tarball we use these tar options:

Note: it also depends which compression method you use for compressing the tarball. For example gzip by default also adds some time stamps to the archive, bzip2 does not. If you want to use gzip then use the -n option.

See the tarball Rake task for the implementation details.

From a security point of view, it is recommended to use SSH for logging into a remote machine instead of user and password in plain text format. But having to memorize the user and password specially if you try to use a strong non predictable password is also hard and hard to maintain.

For that reason SSH provides authentication based on public key cryptography and AutoYaST supports the deployment of SSH Authorized keys for normal users since SLE-12-SP2 but it was not working for the root user.

We have fixed this issue in SLES-12-SP3 allowing to deploy the SSH authorized keys also for the root user and exporting them into the cloned system profile.

The storage-ng based AutoYaST version has received a couple of improvements like, for instance, an improved resizing handling (supporting logical volumes) or multipath support. Additionally, we’ve squashed some bugs, like setting size=max for LVs (bsc#1070131) or some problems when not defining any partition (bsc#1070790 and bsc#1065061).

But even more interesting is the fact that we have brought back a hidden (and undocumented) feature. Did you know that if you set the <device/> element to ask, AutoYaST will ask you about which device to use for installation? Cool, right? This feature will continue working in (open)SUSE 15 and now it is documented! 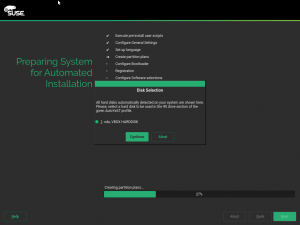 My colleagues are telling me that practicing Scrum may be getting just ever so slightly on my nerves because I have several bugs in my description of the St. Nicholas tradition. Surely they are wrong. Stay tuned for the next report from a new and improved Scrum team: Ježíšek, Santa, und das Christkind.