The wait is over, the report of the latest Scrum sprint of the YaST Team is here! In the previous post we promised that after this sprint we would have much more to show… and now we do.

The wait is over, the report of the latest Scrum sprint of the YaST Team is here! In the previous post we promised that after this sprint we would have much more to show… and now we do. This sprint was quite productive, so let’s go straight to the most interesting bits.

More improvements in the self-update

The YaST self-update feature mentioned in the two previous blog posts (sprint 16 and sprint 17) has also received a couple of improvements.

At this gist (with screenshots) you can see some of the fixes done when going back and forward in the work-flow after an installer self-update.

But even more important are the improvements done in AutoYaST to properly handle the new feature. If you want to use your own self-update repository you have to specify it on the boot command line. This is easy in a single installation, but if you want to install many machines using AutoYaST then writing the possibly long URL at each installation again sounds annoying.

In this sprint we improved handling of the custom update URL so that it can be read from the AutoYaST XML profile. Now you need to write the custom URL only once into the profile and it will be used automatically in every AutoYaST installation.

There is not much to show in the UI, the log proves that the self update was really loaded. 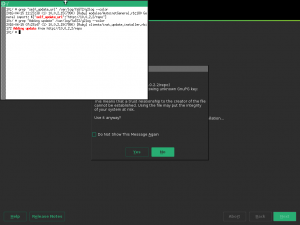 You can find more details about specifying the URL in the profile and evaluating the self-update repository URL at the documentation.

For quite some time, we have had the plan to stop using Perl-Bootloader as library for yast2-Bootloader and finally we managed to make it happen. There were many reasons for this change.

From the user point of view, the most visible reasons were speed and size. Getting rid of Perl-Bootloader means that we not longer perform hardware probing twice (one for Perl-Bootloader and another one for grub2-config), making kernel updates faster. In addition, we are not only simplifying and reducing the size of yast2-bootloader itself. Dropping the Perl libraries and other associated dependencies, makes possible to have a smaller minimal system, something quite relevant in various environments and scenarios.

From the developer point of view, the main reason was to unify the used programming languages and also reuse existing solution for file reading and parsing. Now yast2-bootloader uses an Augeas file parser and serializer, which does not only allow us to have less code to maintain, but also offers smarter editing and better handling of the comments in the configuration files.

As nice side effects, this change also leaded to the removal of a lot of work-arounds, the simplification of the installation work-flow for bootloader and a very visible improvement in the source code quality. In addition, we improved the test coverage of the whole module to make sure we didn’t break things too much. But all those would be bold statements if we wouldn’t have some geeky numbers to prove then, so here they are.

Of course, after such a big rewrite is not unlikely that some new bugs will pop up, but we really believe the improvements are worth the price.

For the storage-ng project we made a big step towards a modern system. We do not use geometries and cylinders for disks any longer. Instead we only use sectors.

The advantage for the user is much better control over the size of new partitions. Since so far the size had to be a multiple of the cylinder size, often 7.84 MiB, it was not possible to create very small partitions, e.g. for the BIOS boot partition. Also the size of partitions was usually not the exact number entered in YaST, e.g. 509.88 MiB instead of 512 MiB.

Now the size of partitions is as accurate as possible with the hardware, so usually a multiple of 512 B or 4 KiB.

Like in the past we also takes care of optimal partition alignment to avoid performance loss due to read-modify-write cycles.

Snapper is a great tool, but the current default configuration usually causes it to be a little bit too greedy with disk space. During this sprint a new set of cleanup rules was implemented, allowing a much more reasonable usage of the disk.

The feature is already developed, submitted to Factory and even integrated into the next version of SUSE Enterprise that is right now being cooked. But, as you all know, the testing work-flow of openSUSE Tumbleweed (staging projects, openQA and so on) can sometimes cause some delay until the new feature appears in the distribution. As soon as the new feature reaches Tumbleweed, a blog post explaining the new functionality will be published at snapper.io. Stay tuned!

The password protection widget in YaST2-Bootloader had not been changed since the GRUB1 times, but GRUB2 allows more fine tunning of the password settings. In fact, it contains a whole user management system with multiple users that can have different permissions and different passwords. For YaST we like to keep things simple, so we support only password for “root” user. That was confusing for some people, so we decided to improve the user experience by adjusting some labels… and fixing some typos in the process.

Two pictures are worth a thousand words, so here you can see how the dialog looked before the change 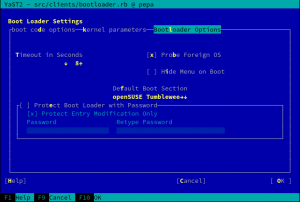 and below the new appearance, which adds more explanation to the password specification. Of course, the help text (not displayed in the screenshots) was also improved to reflect the changes. 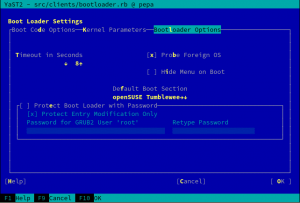 The YaST installer implements several possibilities how the default patterns for the installed product should be specified. One of them is using Recommends RPM dependencies for the product package. (The other possibilities include control.xml file or the content file on the medium.)

The installer by default installs the recommended packages so the default patterns are automatically installed in the initial installation.

The new tag is defaultpattern(pattern) where “pattern” is the name of the default pattern. YaST looks for these specific tags and collects the pattern names for all installed or updated products. This step is skipped during package based system upgrade so this should avoid adding unnecessary packages in system upgrade.

Obviously it depends on the products themselves to switch from the RPM dependencies to this new style. So far it is supported only by the SLES12 SP2 High Availability addon.

Storage reimplementation: another step closer to the perfect booting layout

A couple of reports ago we made public our intention to squeeze some booting experts brains in order to create Ruby classes capable of always proposing a sensible partitioning schema. The delicious result is finally at the repository, accompanied with a rather complete document explaining the logic behind the code.

If reading Ruby code is not your thing but you are geeky enough, you can also review the output generated by the RSpec unit tests, which shows how the new partitioning proposal will behave in all scenarios from the booting requirements point of view.

Storage reimplementation: other improvements in the new proposal

Apart from the already mentioned improvements in setting the boot-related partitions, the brand new partitioning proposal gained the ability of shrinking Windows partitions when needed (in a sensible and gentle way) and reusing partitions that can be shared with other installed systems, like swap of PReP. Even when sharing a swap partition is not possible and the proposal needs to delete an existing swap partitions to create a different one, it will take care of reusing the old label and UUID, so other systems in the same computer can still find a suitable swap for them even after changing the partitioning layout. Because we all can be better citizens…

In addition, we took the first steps to develop a smarter way of proposing a solid partitioning schema when the free space is split over several different disks or disk chunks. Is still a work in progress, but you can trust that in the future (open)SUSE will do a nice job when looking for a home for itself in your sparse hard disk space.

The management of storage devices in a Linux system running in a S/390 mainframe is a tricky topic full of corner cases. Depending on the type of disk, its format and other factors, some apparently simple operations (like creating partitions) are not possible. If you are interested in the subject and want to learn a lot of weird acronyms, we would recommend this article.

We realized that the expert partitioner allowed the user to specify some operations that were actually not supported, which resulted in the installation being aborted at a subsequent step. To avoid that situation, we improved the expert partitioner to detect those unsupported S/390 configurations and alert the user, like it’s shown in the screenshot below. 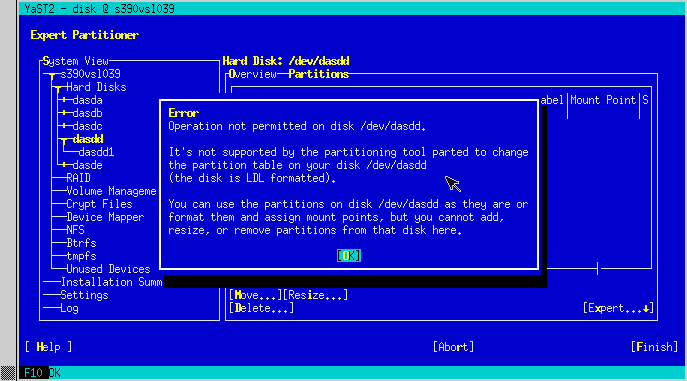 We refactored the network module to unify the handling of device naming. Now AutoYaST assigns the naming udev rules in the 1st stage of the installation already. (yast2-network-3.1.147, autoyast2-3.1.121)

New toys for the team

We got a new server to run integration tests via openQA and AutoYaST.

The AutoYaST tests now used to take 8 hours but now finish in 1.5 hours.

Collaboration with other (open)SUSE Teams

Even though we call ourselves “the YaST team” we are happy to share the project with other teams in the company and people in the community. During this sprint, we had a chance to review code for two significant features.

Since a couple of months, Tumbleweed has had a package for firewalld (see FATE#318356 ). Work is underway to make YaST aware of it but it has not been merged yet. If you are interested you will have to find it in the git repo.

Definitely, this was a very productive sprint and, as usual, this report is just a sample of the total work delivered by the team. To be precise and to please number lovers, the features and fixes covered by this report represent 85 Scrum story points out of a total of 124 delivered ones. Hopefully enough to keep you entertained until the next report in about three weeks. See you then!