openSUSE Conference’16, Hackweek 14 and the various SUSE internal workshops are over. So it’s time for the YaST team to go back to usual three-weeks-long development sprints… and with new sprints come new public reports!

With Leap 42.2 in Alpha phase and SLE12-SP2 in Beta phase our focus is on bugs fixing, so we don’t have as much fancy stuff to show in this report. Still, here you are some bits you could find interesting.

For our SLE customers we promise installations on machines with as little as 512MB of RAM. For Tumbleweed, 1GB is required – so the situation is more relaxed there.

But look at the total size of filesystem images that must be kept in memory during installation: 176MB for SLE12 (Tumbleweed: 224MB). This is leaving not much room to run programs.

The size has grown considerably over time, and we had to look for places to save space. We came up with some major areas for improvement.

The initrd and the installation system (the file system image containing the installer) share many files (mainly libraries). By removing any overlap, we were able to reduce the image size by 17MB for SLE12 (Tumbleweed: 30MB).

After the package installation starts, kernel modules and some raw libzypp cache data are no longer needed. By deleting zypp data we save another 3MB and kernel modules occupy even 29MB in SLE12 (Tumbleweed: 50MB). But we do this only on systems with less than 1GB memory.

So, compared to the available 512MB, these savings are quite substantial and will hopefully keep us going for a while…

Storage reimplementation: another step to an installable system

It’s time for our reimplementation of the storage layer to prove it can do the real work. Thus, we have integrated the new code in a set of modified Tumbleweed ISO images automatically generated in OBS. They cannot still be used to install a system, but the installer is already able to boot and reach the language selection screen (the first milestone we were aiming for).

We already had code that works in a simulated test environment (unit tests) and now we have a way to use that code in a real installer. Stay tuned for exciting news!

Make many extensions fit on the screen properly

For SUSE Linux Enterprise we offer so many optional modules that their listing did not fit on lower resolution screens. Below you can see how the screen looked before the fix – checkbox widgets and their labels do not fit so their bottoms are cropped. 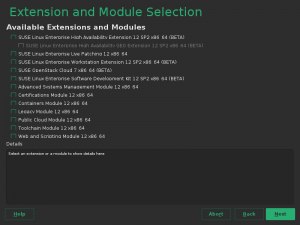 We have to make sure YaST works across different interfaces, including text-based ncurses. That limits the set of widgets we can use when designing interfaces, so finding a solution to that kind of problems is not always easy. We also took the opportunity to add a filter for beta extensions, as you can see in the following screenshot. 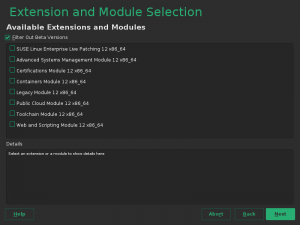 And finally you can see how it looks like with all the extensions, including beta ones. Instead of cropping elements we now have a scroll-bar in the right. 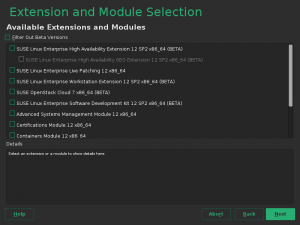 The next step in the storage layer reimplementation is adding support for LVM, since right now only regular partitions are supported. We always write a lot of unit tests to make sure the different pieces work in isolation before integrating everything together into the installer. During this sprint we created all the infrastructure for testing LVM at such level. Armed with that, we can start writing reliable code to handle LVM (something we have already started to do).

We recently introduced the concept of system roles during installation. The chosen role affects the selection of package patterns. But we realized that the roles were not completely overriding the default selection of packages. Before the fix introduced in this sprint, desktop related patterns were included for a KVM server role and, thus, the systemd target was graphical. 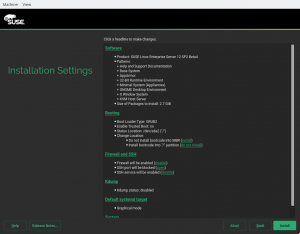 Now, only the 3 patterns explicitly intended for the KVM role are selected, with no desktop related patterns. Accordingly, the system boots to text mode. 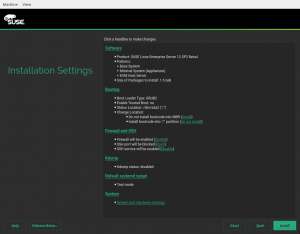 Storage reimplementation: the future of booting

We have explained in several previous posts how we are collaborating with Grub and hardware architecture experts to make sure the new storage layer makes always sensible partitioning proposals. For that purpose RSpec has proven to be an excellent tool. It does not only allow us to have full unit test coverage or our code, but also the generated output has become the perfect base to discuss the expected behavior of the system in every possible scenario.

During this sprint, we spent quite some time together with SUSE’s Grub genius Michael Chang defining the best possible partitioning schema in x86 architectures. Once we had a human-readable and non-ambiguous specification, we modified our code to make sure the associated RSpec tests generated exactly the same specification as output. This way we make sure that our code works and that it fits 100% the experts expectations.

Kudos to Michael for his infinite patience with our questions and for coming up with an innovative way of using Grub2 that will allow us to boot in many tricky scenarios, eliminating the need of introducing a separate /boot in almost all cases.

As said, most of the sprint was invested in chasing bugs… and we don’t expect next sprint to be different in that regard. Even though, we hope this post to contain enough new stuff to keep you entertained and informed about what is going on in the YaST trenches.

See you in three weeks!