We are back to this blog after another three weeks of (mainly) bug-fixing. In the previous post we promised some news about the self-update functionality and about the LVM support in the new storage stack. We have that… and much more!

We are back to this blog after another three weeks of (mainly) bug-fixing. In the previous post we promised some news about the self-update functionality and about the LVM support in the new storage stack. We have that… and much more!

So this will be a long post, but it also hides some gems. You will have to keep reading in order to find them.

We have already mentioned in several previous reports the new self-update feature in YaST, which allows updating the installer itself before performing installation of the system.

But it turned out that the initial implementation had an important drawback. The self-update process happened after having performed some of the installation steps. Then, after updating the installer it was restarted and several of those steps lost their configuration or simply did their operations twice.

As you can see the self-update step is the very first step in the installation workflow, the language selection and the EULA dialog is displayed after the self update is finished and YaST is restarted. That means all the following steps do not need to remember their state as they will not be called twice after the restart.

The disadvantage is that we had to drop some features. The self-update step happens before the language selection and the optional disk activation. That means by default the self-update progress (and potential error messages) will be displayed in English. But you can still use the “language” boot option and set the language manually via linuxrc.

On the bright side, we fixed like half a dozen of reported bugs just by relocating the self-update process. So we are pretty sure it’s worth the price.

The info boot parameter is a pretty old linuxrc option but it is probably not known well. The parameter is an URL which points to a text file which can contain more boot options.

When we tested the updated self-update described above we needed to build a driver update disk and pass several boot options. To avoid repeating the same options on the boot command line and to share the boot options across the team we created an info.txt file with content like

Then you simply boot the installation with info=ftp://example.com/info.txt and linuxrc will read the additional parameters from the file. This can save you a lot of typing, especially if you need to repeat the tests many times.

Some weeks ago, during a routine code review, our security experts found a vulnerability in YaST’s libstorage related to the way we provide the encryption passwords to some external commands. It is debatable how dangerous this threat really is. It was never a problem during system installation, but it would affect admins who create encrypted partitions (mostly encrypted LVM physical volumes) or crypto files in the installed system.

A potential attacker with access to /tmp could intercept the password in the very precise moment in which the “cryptsetup” or “losetup” command are invoked by YaST. It’s really only a matter of milliseconds. But we don’t want to take any risks, however small they may be.

So not only did we fix that for the current code streams, we backported it to all the SLE releases out there that are still supported (even though in some cases it’s just a single customer) – back to SLES-10 SP3 from late 2009. That meant backporting the fix to no less than 7 SLE releases (for Leap, those fixes are picked automatically).

As you can imagine, this got more difficult the farther back in history we went: In a central library like libstorage, things are constantly changing because the tools and environment (kernel, udev, you name it) are constantly changing. There was only a single case where the patch applied cleanly; in all other cases, it involved massive manual work (including testing, of course).

Was this fun? No, it certainly was not. It was a tedious and most frustrating experience. Do we owe it to our users (paying customers as well as community users) to fix security problems, however theoretical they are? Yes, of course. That’s why we do those things.

Storage reimplementation: every LVM piece in its place

As time permits, we keep adding new features to the future libstorage replacement. During previous sprints we added support to read and manipulate all kinds of LVM block devices (PVs, VGs and LVs) but an important aspect was missing: deciding the order of the operations is as important as performing them. We instructed the library about the dependencies between operations and implemented several automated test cases to ensure we don’t try to do not-so-smart things like removing a physical volume from a volume group and shrinking its logical volumes afterwards.

The good thing about our automated test-cases is that they generate nice graph that are quite useful to illustrate blog posts. :simple_smile:

As you may know, openSUSE is one of the Free Software organizations selected to take part in Google Summer of Code 2016. For YaST that means we had the huge pleasure of having Joaquín Yeray as student. You can know more about him and his experience diving into YaST and Open Source in his GSoC blog.

But the openSUSE community is not only gaining a new member, we also have a new YaST module. The yast2-alternatives package has already been accepted into Tumbleweed and will be also part of Leap 42.2. So we have a new gadget in our beloved configuration Swiss Army knife!

We liked Joaquín and his module so much that we are revamping the YaST development tutorial to be based on his module (instead of yast2-journal). He is already working on that, so hopefully we will have Joaquín around quite some time still.

We got a report about the license agreement screen in automatic installation (AutoYaST) being different to the one showed during common installation. So we decided to take a look to the problem and unify them. We are in a quite late phase of the development process of both the next SLE and the next Leap, so we decided to not unify the code but simply adapt one dialog to look like the other. Also we are after string freeze due to translations, so we had to use a trick and reuse another already translated text. We also took the opportunity to fix some small usability problems.

This is one of those cases in which some images are worth a thousand words, so in order to understand what we did, take a look at the description of this pull request, which includes many images (too many for this blog post). 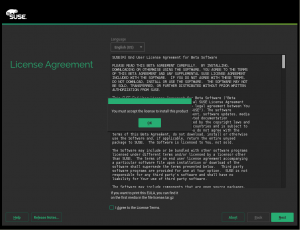 In openSUSE 42.1 it happened that one repository was added twice, even though there was already a check to avoid that. So we investigated why.

We found that the URLs for the problematic repository were not exactly the same, one of them had a trailing slash. Therefore we made the URL comparison more tolerant and if the URLs differ only by the trailing slash, they are still considered the same.

After the fix all repositories are added only once, without any duplicates.

Gem three: we are looking for new teammates!

After 12 sprint reports, most readers would have already realized that the life as a full-time YaST developer is everything but boring… and that we are always pretty busy. The fun and the work are better when you share them so… we are looking for a new hero to join us in our journey.

Even if you don’t feel hacking in YaST would be your thing, maybe you are interested in any of the other jobs at SUSE.

The behaviour of YaST can be affected by several environment variables, but not all of them are well known by everybody. During this sprint we also decided to invest some time documenting them better. The resulting document will be soon properly integrated in our centralized documentation for developers, but you can sneak it already here.

Most of the features and bug-fixes we have blogged about in the last months were incorporated to Tumbleweed, the upcoming Leap 42.2 and the future SLE 12-SP2, since we always try to keep those three codebases as close as possible to each other.

Now Leap 42.2 and SLE 12-SP2 are close enough to their release date, so we plan to be more conservative with the changes. At the end of this sprint we decided to branch the code for Tumbleweed and for the stable siblings. From now on, most exciting stuff will appear only in Tumbleweed, with SLE 12-SP2 and Leap 42.2 becoming more and more boring.

And the wheel keeps on turning

So that was a very minimal selection of the most interesting stuff from the just finished sprint. What comes next? Another sprint, of course! We have already planned some interesting stuff for it, like integrating the new partitioning proposal into the installer or finishing the ultra-cool UI designer that was started during latest Hack Week.

As always, you can follow development in a daily basis in the usual channels (#yast IRC channel and the yast-devel mailing list) or wait another three weeks for the next sprint report. Meanwhile… have a lot of fun!