In our previous post we promised news about this blog, but the administrative part slowed us down and the surprise is still not ready. On the bright side, we have quite some news about YaST. So let’s go for it!

As you may know, SUSE has been working on making containers easier, with SUSE Container as a Service Platform. We have referred to it in several previous posts using the CASP acronym, although nowadays the correct one is CaaSP (maybe we could sell the new “a” as a shiny feature

Part of this upcoming product is also an interactive installation option using the good old YaST. CaaSP uses a limited subset of the SLE possibilities and we wanted to make the installation simpler to reflect that. So we reduced the number of dialogs you have to click through… to one! 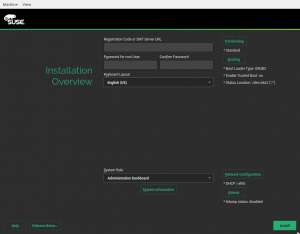 As you can see, it is at the expense of stuffing the screen with more widgets than usual. Still, the only part where you must make a decision is the root password.

We expect that most of the CaaSP installations will actually not use this, because they will be done automatically with AutoYaST. But still this should be useful when you are only getting started.

It was possible to make a proposal “read-only” for some time already. However, its black-and-white logic was not sufficient for some use cases. So, it was redesigned and you can mark a proposal hard read-only or soft read-only. The difference is that users will never be able to change hard read-only proposal. However their will be able to modify a soft read-only proposal if the proposal reports an error. It can be useful e.g. for error recovery in software proposal. It has been implemented originally for CaaSP, but it will be available for SLE-12-SP3 and Leap 42.3 too.

Installing directly from a repomd repository

In that example, we install Tumbleweed from the openSUSE website and use the installer from some local media (maybe the NET iso).

To make things even easier there is now a regular package (tftpboot-installation-openSUSE) that contains the installation system and some sample config files.

Check out this linuxrc documentation for technical details.

In our latest post, we presented the dedicated openQA instance contantly testing the new storage layer implementation. It still doesn’t run exactly the same tests than openQA.opensuse.org because not all technologies and operations are supported yet in the new yast2-storage. But now we are a couple of steps closer to run the full-blown tests also in our dedicated instance.

During this sprint, the partitioning proposal gained the ability to deal with disks not containing a partition table in advance (it always proposes to create a GPT one in that scenario) and the software selection proposal learned how to use the new storage API, so it can properly inspect the system and the associated error pop-ups are gone from the installation workflow.

More power to the system roles

We keep extending the capabilities of the system roles, now with the ability to specify some systemd services to enable. As the roles can define which software gets installed in the system, it made sense for them to also be able to specify the desired status for the services included in that software

For example, it would be possible for a given product (let’s say a customized openSUSE) to define a “static web server” role. Choosing that role during installation would result in a system with a HTTP server already installed and enabled, so the user just need to copy the files to be served into the right directory.

Setting up an encrypted LVM was always pretty easy when using the automated storage proposal – simply select “encrypted LVM” at the proposal settings and you are done.

But doing that manually was almost impossible: The expert partitioner wouldn’t allow any of the system mount points (“/”, “/usr”, “/var”, …) on any encrypted partition, and it also wouldn’t allow to encrypt, but not format a partition of type “LVM” for use as an LVM physical volume.

Both restrictions are now lifted; you can now create an LVM physical volume with encryption, or you can do the encryption layer on the logical volume if you prefer. And you can create an encrypted plain partition with a filesystem directly on it without LVM.

Over the years, Grub2 learned how to do that, so you don’t even need a /boot partition anymore. For the time being, you’ll need to enter the encryption password twice, though: once at the Grub2 prompt and once later at the graphical console so systemd can mount those filesystems. Our base system developers are working on a secure solution to avoid that.

That’s actually not a change in YaST itself, but in its development infrastructure. Still, we believe it would be interesting for the average reader of our blog.

So far we used Travis CI for building and testing the commits and pull requests at GitHub. But the problem was that by default Travis runs Ubuntu 12.04 or 14.04 at the build workers. That had several drawbacks for us, since compiling and testing YaST on Ubuntu is not trivial and the result is not always 100% equivalent to openSUSE. All this meant extra maintenance work for us.

Fortunately Travis allows using Docker containers at the workers and that allows using basically any Linux distribution. This sprint we spent some time converting the Travis configuration to use a dockerized openSUSE Tumbleweed at Travis.

The work was successful, we switched all YaST modules to use this new builds and the result is already paying off at several levels, although it took us over 100 pull requests (all of them manually tweaked and reviewed) to make it happen.

The current solution is documented and we had also a short internal presentation about this change. The notes from the presentation are available here.

We also enabled Travis integration with Docker for Snapper. As you may know, Snapper is a portable software that has always offered packages for many Linux distributions in the filesystems:snapper OBS repository.

So we took the continuous integration one step further and enabled Travis builds on more distributions, currently we build for openSUSE Tumbleweed, openSUSE Leap 42.2, Fedora 25, Debian 8 and Ubuntu 16.10. You can see an example build here or more details in the documentation. 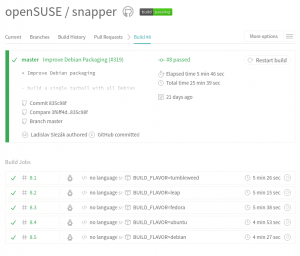 That means we can ensure that the package still builds on all these distributions even before merging a pull request!

Systemd recognizes many possible states for a service beyond the classic Unix enabled/disabled and running/stopped, and that list of possible states grows with every systemd release. In the past YaST have had some issues displaying the services status.

Now the problems are fixed by delegating to systemd the conversion from the concrete state to the good old known Unix equivalent. So the user now gets more precise information about all services running on the system.

In the latest post we showed you the document we were using as a base to discuss the new expert partitioner UI with usability experts. Now it was turn for the proposal settings dialog. We collected the current state, had a very productive discussion and ended up with a proposal for a new interface. You can check the resulting document covering all that.

As mentioned, the SUSE UX experts will use that document as a starting point to design the final interface. But we want the process to be as open as everything around YaST, so feel free to provide feedback.

When performing an upgrade, YaST needs to know whether a product is renamed or replaced by a another one. For example, in the past, the Subscription Manager Tool (SMT) lived in its own product but it’s included in SUSE Linux Enterprise 12. So YaST needs to know that the suse-smt product was just replaced by sles.

This information is usually provided by the SUSE Customer Center (SCC). But what happens if, for example, we are performing an offline upgrade? Until now, YaST used a hard-coded fallback list.

From now on, before falling back to such a list, YaST will ask libzypp for that information so, hopefully, it will avoid some problems while upgrading extensions and it will reduce the hassle of maintaining a hard-coded list.

The YaST storage subsystem has been taking care about storage-related software packages for a long time. For example, when a specific filesystem type like Btrfs or XFS is used by the system, we need to make sure that necessary support packages like btrfsprogs or xfsprogs are installed.

Figuring out what features are used is now done by the new libstorage. In this sprint, we created one Ruby class that maps those features to respective packages and one class that handles package installation itself. One interesting technical aspect is how Ruby introspection capacities are used to avoid duplicating the list of defined features from the C++ part (i.e. libstorage).

Apart from all those changes in YaST, and many more we have not included in this summary, we have something else to celebrate. On February 1st the YaST Team at SUSE has grown with the addition of a new member, Iván, who will allow the project to evolve even faster and better… and that will not be the last announcement in that direction, so stay tuned.

But don’t forget you can also help YaST, and openSUSE in general, to keep moving. This week we added several ideas for Google Summer of Code projects to the openSUSE mentoring page, including one idea to contribute to YaST. Do you have a better plan for this summer?

See you in less than three weeks, since the next sprint will be slightly shorter due to Hack Week 15.