Since we announced in the latest report, we decided to shorten our development sprints from three to only two weeks. As a natural consequence, this is the first report of a series of shorter ones. But shorter doesn’t have to mean less juicy! Keep reading and enjoy.

We got a bug report about YaST not responding when a very long package changelog was displaying in the package manager. It turned out that some packages have a huge change log history with several thousands entries (almost 5000 for the kernel-default package). That produces a very long table which takes long time to parse and display in the UI.

The solution is to limit the maximum number of displayed items in the UI. You cannot easily read that very long text anyway, for such a long text you would need some search functionality which the YaST UI does not provide.

Finding the limit, that magic number, was not easy as we want to be backward compatible and display as much as possible but still avoid that pathological cases with a huge list.

In the end we decided to go for a limit of 512 change entries. The vast majority of packages have way fewer entries, so you should not notice this clipping functionality. When the limit is reached a command to display the full log is displayed at the end so you can easily see the missing part when needed. (Hint: the widget supports the usual copy&paste functionality, you can copy (with Ctrl+C) the displayed command and paste it into a terminal window directly.)

In the previous report we told you we are rewriting the YaST partitioner to use the new storage stack and modern reusable CWM widgets under the hood while retaining exactly the same behavior and look&feel on the surface. We are reimplementing one feature at a time, and this sprint it was the MD RAID’s turn.

Now the partitioner displays current RAIDs, with details about them and the devices used to construct each RAID. If a picture is worth a thousand words, here you have 3,000 words: 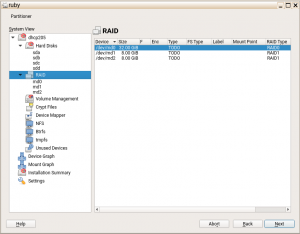 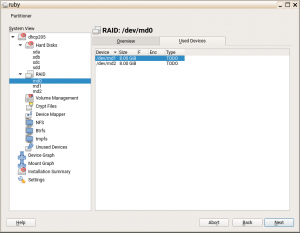 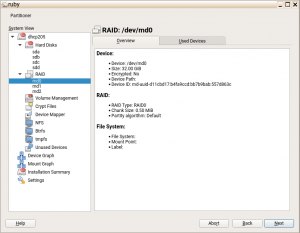 No, you can’t have a separate partition for /var/lib/docker for CaaSP – so here you have it

Our brand new containers-oriented solutions, SUSE CaaSP and its openSUSE counterpart Kubic, need to have /var/lib/docker as a separate partition for several reasons. It was a separate Btrfs subvolume already, but that wasn't quite separate enough.

The problem was just that the automated storage proposal in the old YaST storage subsystem is not prepared for anything like this; it can deal with root, swap and optionally a separate home partition (or volume if using LVM). That's it. Extending the current syntax of the control.xml file to be able to specify arbitrary partitions and adapting the code of the old proposal to understand and handle this new specification was unfortunately almost impossible. Sadly, we have to admit the old code is hardly maintainable these days and not flexible enough to accommodate this kind of changes in a safe way.

This is one (out of many) reasons why we are currently in the process of rewriting that entire YaST storage subsystem, as you already know from many previous posts in this blog. But, as you also know, the new system will debut in SLES15 and openSUSE Leap 15.0, too late for the current SUSE CaaSP and openSUSE Kubic.

We decided we'd introduce a hack based in the old proposal, well knowing that hacks accumulated in code can develop their own life just like Dust Puppy. But we plan to kill that hack immediately once StorageNG arrives.

So the hack was to simply use the logic for the separate home partition and repurpose it, keeping all the respective parameters in control.xml and introducing yet another one called home_path where the actual mount point for that partition can be specified — in this case /var/lib/docker. The tradeoff is that there can be no separate /home anymore in parallel to that.

That "feature" should not be used outside of that very specific use case in CaaSP and we even considered the possibility of not documenting it too publicly to avoid misuse. But we are living the open source spirit and whatever we do, we do in public. Even if it's the (quite embarrassing) fact that we consider changes to certain parts of our own code too risky. But again, that's why we are pushing the storage layer reimplementation (Storage-NG) so hard: we want to regain control over that part.

And talking about the new storage layer and our previous posts, you already know we are working hard to integrate it with AutoYaST. For the time being, custom partitioning layouts are supported, but only using plain partitions and LVM. Other features, like RAID or Btrfs subvolumes support, are still missing.

A nice thing about the new code is that it relies as much as possible on the new storage layer. On older versions, AutoYaST implemented some logic on its own and that caused some unexpected troubles. Fortunately, that is not the case anymore, and the new code looks way easier to extend and maintain. 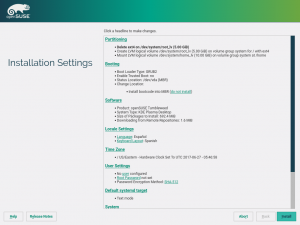 YaST does not write directly in /etc/vconsole.conf anymore

When configuring the system keyboard, YaST used to write the keyboard map configuration directly in the /etc/vconsole.conf file. However, this approach is no longer appropriated since it may cause undesired effects to other tools. Now YaST uses the Systemd tool localectl to set the keyboard map in /etc/vconsole.conf, instead of writing in it directly. Another step to make YaST a good citizen of the Systemd world.

If you use MD RAID arrays you probably know there are two ways of identifying them – by number or assigning a meaningful name to them. Named arrays use device names like /dev/md/<name> instead of /dev/md<number>.

During this sprint, we taught the new libstorage how to create and manage named RAID array, in addition to the already supported numbered ones. If the user decides so, the MD RAID name is used in fstab instead of the UUID (which was the only option with the old libstorage). We also made sure to improve the behavior in several scenarios, so we consider some bugs of the old storage to be fixed (or obsoleted, if you prefer) with storage-ng.

Linux also supports names of the form /dev/md_<name>. The new library is also able to handle this format, but the feature is intentionally disabled and documented to be unsupported because other parts of the system could not be 100% verified to work in that scenario. And we take quality assurance very seriously before labeling a feature as “supported”.

If you are not happy enough with the screenshots showing the RAID support in the partitioner, here you have more pictures. But, as usual with stuff implemented in the library, here “pictures” doesn’t mean screenshots, but fancy automatically generated graphs. 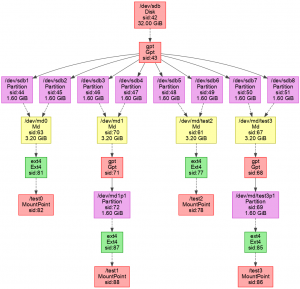 Of course there are a lot of other things we did during the last two weeks, although some of them were considered not interesting enough for this report or were not finished on time. We are already working in finishing the unfinished stuff and implementing new exciting improvements. And the bright side is that you only have to wait two weeks to know more… so stay tuned.