Here we go again with a new report from the YaST trenches. This time with the storage reimplementation as the clear star of the show.

As we have announced in our previous sprints and as you probably already know, the YaST team is working hard to rewrite the whole storage stack on time for SLE15 and openSUSE Leap 15. As part of this reimplementation we have designed a brand new storage proposal that automagically offers the user the best combination of partitions and LVM volumes based on the current configuration of the system and the user preferences. 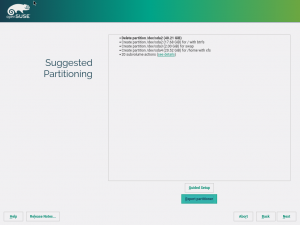 When we are working with very small disks or with special technologies like DASD (which doesn’t accept more than three partitions by device), the storage proposal might not be able to generate a valid initial proposal honoring the initial requirements of the product (e.g. creating a separate home partition and enabling btrfs snapshots for the root partition in the openSUSE Leap case). Now the proposal is not limited to fail when it is not possible to satisfy the default product requirements. Before giving up, the new system looks for alternatives, like discarding the separate home partition or disabling snapshots. Moreover, now the proposal is able to automatically adjust the size requirements not only for root, but also for swap and home. And, of course, the guided setup continues there for fine tuning the proposal settings.

As our usual readers also know, we recently introduced a more fair desktop selection screen for openSUSE, both Leap 42.3 and Tumbleweed. We used part of the latest sprint to implement some feedback we gathered about the wording and behavior of that dialog. 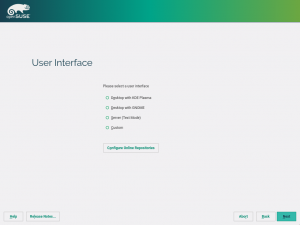 That feedback gathering included some discussions on how to make user experience nicer after selecting one of the user interfaces available through the “custom” option. As a result, the awesome openSUSE crew created a new mechanism for selecting the default window manager on each graphical login, so YaST can delegate the details to the maintainers of those alternative interfaces.

How everything works now? Glad you asked.

If the user select KDE or GNOME in the YaST dialog, /etc/sysconfig/windowmanager is configured to point to that desktop by default. If the “custom” option is selected, then YaST does not enforce any interface in that file and the new mechanism comes into play. It relies in the default.desktop file, which defines the default window manager and can be managed by the common update-alternatives workflow. Meaning it can be easily tweaked by the package maintainers and by the users, specially since YaST includes a nice module for managing alternatives.

Although, as explained above, we keep improving the storage automatic proposal to support more and more situations, we cannot ignore that flexibility and adaptability have always been two of the flagships of (open)SUSE. And one of the most prominent examples is the YaST Expert Partitioner.

As detailed in our report of the sprint 36, we have been rewriting that powerful Swiss Army knife using the new storage stack but keeping the same user interface and functionality. So far, the new implementation was only able to display information about the existing partitions, LVM systems and MD RAIDs. But now we added many options to create, edit and delete partitions. 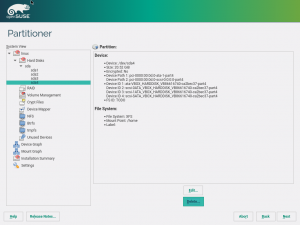 It is still a work in progress because the number of possibilities offered by the YaST Partitioner is sometimes overwhelming and implementing them all takes time, but it’s progressing nicely.

In both SLE and openSUSE Leap, the online updates can be installed either manually or automatically at some regular intervals. For the automatic installation we provide the yast2-online-update-configuration package which provides a cron job script and an YaST module for configuring it (hint: it is not installed by default, you might give it a try, maybe it is something “new” for you). 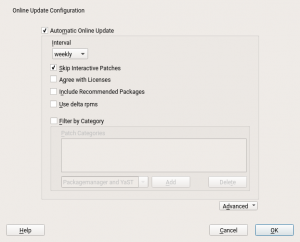 It turned out to be a trivial mistake in the cron job and we fixed it for SLE12-SP2 and Leap 42.2, as well as for the upcoming SLE12-SP3 and Leap 42.3. So if you use this module and want to use the category filter then it’s recommended to upgrade the package.

Storage reimplementation: many steps forward in the AutoYaST integration

And going back to our new storage stack, we keep working to integrate it better with other parts of YaST, specially AutoYaST. During this sprint we polished some rough edges and we added support for MD RAID. With all that, now is possible to automatically setup a system based on an AutoYaST profile containing any combination of partitions, LVM systems and MD arrays, including encryption at any of the levels. 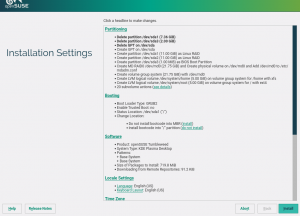 But the relation of AutoYaST with the system works in both directions. Apart from being able to install a system based on an AutoYaST profile, it also offers the interface to export the current system configuration, including the storage layout, to a profile in order to reproduce the system later. During this sprint we also ported that logic to rely on the new storage layer.

It was harder than it sounds, due to the need of keeping the backwards-compatibility with several behaviors that have been introduced along the AutoYaST history to adapt to several specific situations. On the bright side, the new code is easier to follow, includes behavior-driven automated tests (RSpec) and contains information about the rationale of each decision… which in some cases required some archaeology.

Another part of YaST we are constantly working to integrate better with the new storage stack is yast2-bootloader. Although the new storage system was already able to correctly setup a valid disk layout for most situations and architectures (each one with it’s own requirements for booting), our bootloader module is still not fully compatible with the new system in all those scenarios.

During this sprint, we adapted it to ensure all the combinations suggested by the new storage stack (partitions, LVM, encryption and so on) are correctly covered by YaST2-Bootloader. As a result, we can already say that our testing ISO images are fully installable in any x86_64, PowerPC and S/390 system by just clicking “next” a few times. And we have automated integration tests (a separate openQA instance) to ensure the resulting system boots just fine.

We know some of our readers enjoy our more technical posts and like to lurk into the kitchen to see how we deal with all kind of surprises maintaining a complex tool like YaST. Today’s chapter in that regard started with a bug report about the bootloader being installed in the wrong device name (/dev/vda instead of /dev/vdb) in an emulated PowerPC machine in openQA.

After a lot of investigation and with help from our PowerPC expert, we found the culprit, that turned out to be an emulator quirk. The next couple of paragraphs may be interesting or daunting, depending how much virtualization and PowerPC jargon you know. Be warned.

On POWER, the PReP partition containing the bootloader has no unique identifier other than the serial number of the disk on which it created. QEMU virtualization does not provide any disk serial number when the user does not explicitly specify one. This means that the PReP partition in QEMU installation does not have any unique identification and the partition name may change when a disk is added or removed from the virtual machine or the storage configuration otherwise changes. This may lead to system errors related to bootloader installation and updates.

It is recommended to assign a unique serial number to each disk in a QEMU virtual machine on POWER when it is expected the storage configuration of the virtual machine may change. Otherwise, there is nothing YaST or any other tool running within the virtual machine can do to avoid the problems. So this time we only did the investigation part, with the fix coming from the openQA side, which was improved to explicitly set serial numbers when needed.

As exposed above, our StorageNG testing image already works in all the supported architectures and in scenarios combining plain partitions, LVM, RAID and encryption in any way. But there are even more situations and technologies currently supported by YaST that we need to incorporate into the new stack.

First of all, we used this sprint to add Multipath I/O support to the new libstorage. Now it can also be combined with all the other mentioned technologies (like having an LVM system on top of an encrypted multipath device), although the storage proposal still needs to be adapted to play nicely with preexisting multipath setups.

As usual with the library stuff, the best “screenshot” we have to offer is one of its geeky autogenerated graphs.

Another scenario that goes beyond the most regular use cases is installing the system into a network storage device, instead of a local hard disk. Now, the new storage system can report whether a root filesystem via a network is used. When that happens, YaST sets the network interfaces with the start mode nfsroot, which is used to avoid interface shutdown and, therefore, the unavailability of the system.

Once again, we omitted the boring parts about bugfixing (with yast2-ntp-client being the star in that regard) and similar stuff. We hope you enjoyed the report and we hope to reach you again in two weeks. Meanwhile…

Have a lot of fun testing the Leap 42.3 pre-releases and reporting bugs!