Doubtlessly, these are pretty exciting times for the YaST team. The merge of the new storage layer into the main codebase is around the corner and we are working on other features that will debut on the next open(SUSE) major release. So let’s summarize what happened during the last sprint.

As you may already know, the YaST team has invested a lot of time and effort preparing our storage layer for the future and we have started to merge the new layer into the main code base during the current sprint. But that’s something for our next report, right? By now, we will just focus on the stuff that got added and fixed during the last two weeks.

libstorage-ng, the low level library in which our new storage layer relies on, got support for BIOS RAID (handled in Linux via MD devices). Now, YaST could take advantage of such a feature to allow the installation of open(SUSE) systems on this kind of devices, including the bootloader. 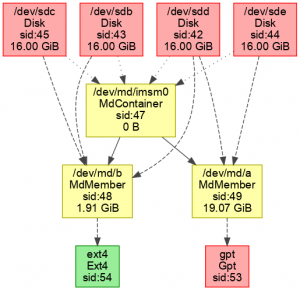 The new Expert Partitioner is getting a lot of attention these days and, during sprint 40, it got initial support for Btrfs subvolumes management. 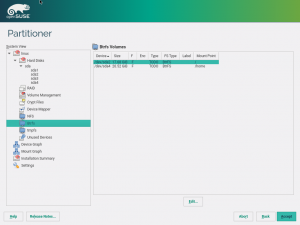 Now, when you select the BtrFS section in the general menu placed on the left, all BtrFS filesystems are presented allowing you to edit its subvolumes through a dialog which contains the list of subvolumes that belongs to the filesystem. Apart from the usual stuff, like adding and deleting subvolumes, it is also possible to set the noCoW property when you are creating a new one. 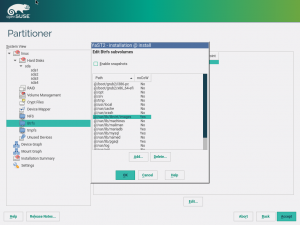 However, some features are still missing. For instance the partitioner will not prevent you to create a subvolume which is shadowed by an already existing mount point. Consider the current implementation as the first step towards a really cool Btrfs subvolume handling.

During installation, YaST uses a mechanism known as SUSE tags as source of information for media handling. For instance, a /content file contains information about the product, languages, etc. Additionally, information like release notes or the slide-show texts are stored in the installation media.

Some time ago, SUSE decided to drop SUSE tags and use RPM metadata and packages to store all that information. To make it possible, the installation media would use REPOMD repositories.

Obviously, YaST needs some adaptation. As a first step, support for the /content has been dropped, cleaning up some old and even unused code.

In the upcoming sprints, YaST will be adapted to retrieve licensing, release notes, etc. from RPM repositories and packages, which is also an opportunity to do some refactoring and to improve test coverage.

Nowadays YaST supports having add-on products on the same media than the base product. The problem is that the EULA for those products is displayed too early, even before AutoYaST had been initialized at all.

To solve this issue, now the EULA acceptance of included add-ons is performed at the same time than other add-ons which are not included in the installation media. As a side effect, now the user needs to define those add-ons on the AutoYaST profile in order to handle the EULA acceptance.

As developers, we enjoy working on new features and, of course, we are committed to fix critical bugs as fast as possible. But there are many small (and annoying) bugs out there that deserve our attention. Additionally, there are several bug reports that are no longer valid (the bug was fixed, it is not reproducible, it is a duplicate, the affected product is not supported anymore, etc.). In order to reduce the list of open issues, the team decided some sprints ago to reserve one day to do some bug squashing.

Among the bugs we closed during this sprint, we would like to highlight a usability problem in YaST services manager. Bear in mind that, along with the graphical interface, YaST ships a text based one which is supposed to fit in good old-fashioned 80×24 terminals. That’s an interesting constraint when you are designing interfaces for YaST.

Needlessly to say that, from time to time, we get a bug report about some element that just do not fit. In this case, YaST services manager had a problem when the service name was too long as you can see in the screenshot below. 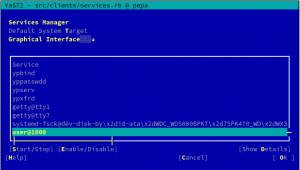 Now, if there is not enough space, the name will be truncated and the rest of the information will be shown in an proper way. 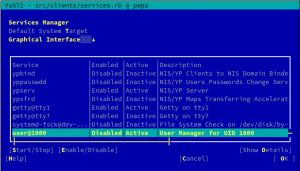 Do not miss the next report!

As you may have noticed, a lot of interesting things are currently happening in the YaST world and more cool stuff is about to come. So you should not miss our next sprint report.

By now, enjoy openSUSE 42.3 (you already upgraded your system, right?) and see you in two weeks.