The summer is about to end (in Europe) and it is time for another YaST Development Sprint report.

As usual, storage-ng has been one of the stars of the show, but new installer features for upcoming SUSE/openSUSE versions have received a lot of attention too. Also CaaSP 2.0 got some love from us during this sprint.

The new storage layer is getting better everyday. After the big amount of work that came with the re-implementation, the team is trying to unleash the power of the new design.

Udev Mapping is Back

The bootloader module supports using persistent device names provided by Udev. It is a pretty useful feature that comes in handy in many situations but it was missing in the storage-ng based version of the module.

But fear not: this feature has been re-implemented taking advantage of the much improved API of the new storage layer. And that’s not all: the team also took this opportunity to clean up some code and document the strategy for picking Udev device names in a proper way.

Do you want more details? Here you have them. Let’s start with the scenarios we support:

Given these scenarios, let’s have a look at the strategies:

For quite some time, the storage-ng code has been tested (and worked) on x86_64, ppc64 and s390x architectures. Now, we have added aarch64 to match the list of supported architectures in SUSE Linux Enterprise and openSUSE Leap.

Speeding up the Service Manager Startup

As you may know, YaST includes a nice module for managing systemd services. Compared to systemadm, included in the system-ui package, there are some key differences:

Some time ago we got a report that the presented information was inaccurate in some corner cases. We fixed that but also made the module a lot slower at the same time. It did not take long for that to be reported.

We tested the following scenario: 286 services (SUSE Linux Enterprise 12 SP3 with nearly all software patterns installed) on a not very fast virtual machine. Normally, you should have fewer services and probably a faster system, but we wanted to fix the issue even for the worst scenario.

After analyzing the problem, we found out the root cause: too many calls of systemctl, at least 3 times per service (show, is-active, is-enabled). With a couple dozen milliseconds per call, it quickly adds up.

The fix was to combine all show calls into one and correctly interpreting the ActiveState property to eliminate all of the is-active calls. But you want to know the numbers, right? After the fix, the startup time went down from 69 to 15 seconds (bear in mind that it is a slow virtual machine).

So even if your system is not that slow or you have fewer services installed, you may benefit of a shorter startup time for this module.

There are some hidden gems in YaST that are maybe not well known although they have been there for a long time. One of those features is support for multi repository media.

What actually is a multi repository medium? Imagine a CD or DVD with several independent repositories. The advantage is that, if you want to release several add-ons, you can put them all on a single DVD medium. Really nice stuff, isn’t it?

Up to now YaST added all repositories found on the medium automatically without any user interaction. In this sprint we have added a new dialog into the workflow which asks the user to select which repositories should be used. Of course, if there is only one repository, it does not make sense to ask and the repository is added automatically. 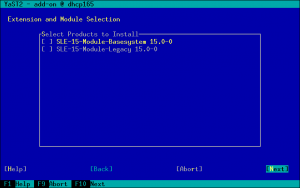 On June 2017, SUSE released the first version of the promising SUSE CaaS (Container as a Service) Platform. The YaST team actively worked on this project by adding several new features to the installer, like the one-dialog installation screen.

That very first version of CaaSP was only available in English. However, version 2.0, which is around the corner, will support more languages. For the YaST team, it means that we needed to add the language selector to the
installer, as you can see in the screenshot below, and to mark every string in the yast2-caasp for translation. 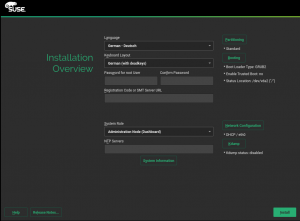 Finally, if you are interested in CaaSP, maybe you would like to check out Kubic, its Tumbleweed based variant.

Apart from the new and shiny stuff, the YaST team was able to fix quite some issues during this sprint. Let’s have a look at some of them. 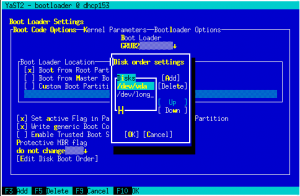 Usability is a critical point for a project like YaST. From time to time, we receive a bug report about some usability problem that needs to be addressed and we took them very serious. In this case, the bootloader module had a problem when showing long device names in the dialog to change the order of disks. So we just needed to do a minor fix in order to ensure that there is enough space. 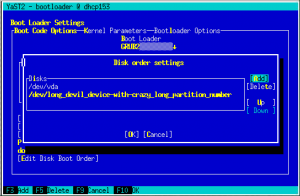 It sounds scary, but YaST supports an insecure mode during installation. What does it mean? YaST is pretty flexible when it comes to system installation. You, as a user, has the power to modify/tweak the installer (using a Driver Update Disk), add custom repositories, etc. And sometimes it can be useful to skip some checks.

Some time ago, libzypp introduced a new callback to inform about bad (or missing) GPG signatures. This callback was properly handled by AutoYaST but it was ignored in regular installations, so the user always got the warning about the failing signature, even when running on insecure mode.

Now the problem has been fixed and you can run the installer in insecure mode if you want to do so.

YaST deals with a lot of moving parts and, although it can be daunting for the newcomer, it also has a bright side: we regularly learn new stuff to play with.

In this case, Martin Vidner, one of our engineers, had to deal with a fix related to the Fibre Channel over Ethernet support in YaST. But instead of blindly applying the patch that we already had, Martin decided to learn more about the topic sharing his findings in its own blog. Sure it will be a valuable resource to check in the future.