The YaST team finished its 47th Sprint right before the Christmas break but, sadly, we had not published the corresponding report… until now. The last sprint of the year brought some interesting changes, like Chrony support for AutoYaST, better multi-products medium handling, etc. So let's recap those changes.

As part of our effort to support Chrony as the default NTP service for (open)SUSE, we have revamped how AutoYaST handles the configuration of such a service. The first noticeable change is that we have redesigned the schema which, instead of containing low level configuration options, is now composed of a set of high level ones that are applied on top of the default settings.

And here is how the new (and nicer) configuration looks like:

During this sprint, the remote administration client has been deeply modified. To begin with, as xinetd is being replaced by systemd sockets, we have dropped that dependency (adjusting the code accordingly).

Additionally the VNC handling have been improved too. Until now, YaST offered the possibility to connect through a web browser using a Java applet. Now YaST allows the user to enable/disable this feature (check the screenshot below to see how it looks now). It is worth to mention that Michal Srb has replaced the old viewer with novnc, a JavaScript based one. Thanks a lot for that, Michal! 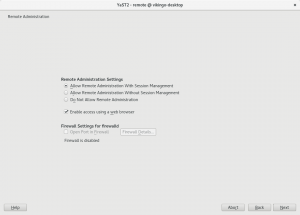 And last but not least, we have seized the occasion to do some code cleaning, reimplementing some dialogs using the Common Widget Manipulation object oriented API.

AutoYaST offers a cool feature that allows the profile to be modified during the initial stages of the installation using an user script. So you can run a script which adjusts the profile and AutoYaST will read it again. If you are interested in such a feature, you could find more information in the official documentation.

On the other hand, in our previous report, we mentioned that AutoYaST was able again to use multipath devices using the new storage stack. But we didn’t count that it was possible to modify the profile on runtime so the initialization happened too early.

Now the bug is fixed so you can again adjust any storage setting using the aforementioned feature.

As you may know, some time ago we added a support for the multi-product media (DVDs which contain more than one repository/product in separate subdirectories). This time we fixed some issues regarding this functionality.

Originally after selecting several products only one of them was actually selected to install and only one product was displayed in the installation proposal. Fortunately, those issues have been addressed now. 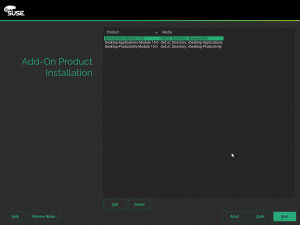 For the multi-product DVD media we used this selection dialog: 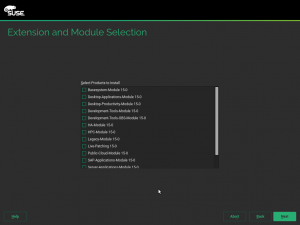 The functionality is very similar to the on-line product selection dialog displayed after registering the system: 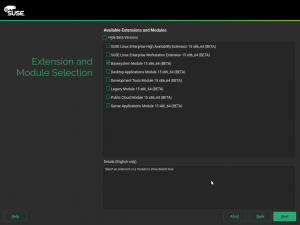 As you can see the look & feel is quite different, but from the usability point of view the dialogs should look the same regardless whether the products are added from a DVD medium or from an on-line source (a registration server).

This sprint we improved the DVD media dialog to better match the registration dialog: 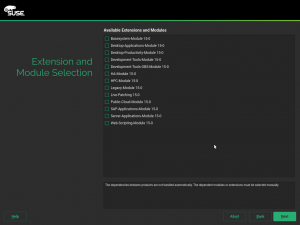 The dialog is still not exactly the same, but now it looks more similar so users should feel more familiar with it. There is also displayed an additional note about not handling the product dependencies automatically. This note was already present in the help text but that is hidden by default. As we got quite a lot of bug reports about this issue we decided to make this fact more prominent.

We have been using the environment variable called SYSTEMCTL_OPTIONS (which is SUSE-specific) in our systemd services to prevent locks in dependencies. As this hack will not be necessary for upcoming the (open)SUSE 15 version, it will be dropped from systemd and, therefore, we already removed it from our systemd services.

When specifying an AutoYaST partitioning schema, you can select which partition type you want to use for each device (MSDOS, GPT, DASD, etc.). In the past, AutoYaST implemented its own logic to select which one to use in case that it was not specified by the user. After this sprint, AutoYaST relies on the new storage stack in order to decide which option fits better when the user does not specify one.

Some time ago we had serious issues with service management in YaST (see bug#1012047 and bug#1017166). The problem was caused by introducing a new systemd service state which was not expected by YaST. We fixed the problem by correctly handling the new state.

But the main problem was that we (as the YaST developers) were not notified about this major system change and we found this change later after we got bug reports in Bugzilla. To avoid this problem again in the future we decided to implement a script which would regularly check the defined systemd states notifying us if a unknown state was detected.

To implement the regular check we use the Travis cron job feature which allows running continuous integration builds not only after a change is pushed into the repository but also in regular intervals, even when there is no change in the code.

Alternatively you can use any CI service, but we chose Travis because it is easy to use and we already use Docker for normal CI jobs which allows us to run the latest systemd from openSUSE Tumbleweed in an easy way.

In this case we could possibly run the script in OBS when building the yast2-services-manager package, but that would need adding systemd to BuildRequires which does not sound as a good idea…

So if you also need to run some check scripts regularly you can see more details in this pull request.

2017 was an exciting year with a lot of interesting stuff: a new storage layer, multi-product installation medium, integration of new components (firewalld, chrony, etc.). And it looks like 2018 will not be different and we will have a lot of fun.

Thanks for your support and happy new year!