Sprint 50 is finished and we are ready to share with you all the highlights of this last sprint!

We are close to finishing features for the new SUSE Linux Enterprise 15, so this time we came up with a lot of information about the new storage, partitioner, firewall enhancements, and roles, which now is also present for the Desktop version of SUSE Linux Enterprise. Besides that, we fought another issue regarding memory consumption in Tumbleweed installation and once again we were able to solve it. So, let’s take a look into details!

Filesystem type specific default mount options in /etc/fstab are back

We reimplemented another feature that was still missing with the rewrite of the YaST storage stack: Reasonable mount options in /etc/fstab that may be different for each filesystem type. For example, for an Ext4 filesystem we used to set options data=ordered,acl,user_xattr by default. Of course, you can still change those options in the partitioner if the defaults don’t work well for you.

For most filesystem types, this was straightforward: Just filling a table with fixed default options. But for some others, most notably the legacy Microsoft filesystem types FAT/VFAT, this involved some not-so-trivial heuristics to figure out locale data so we could provide reasonable values for iocharset=... and codepage=...; those are necessary to recode filenames with non-ASCII international characters between whatever a MS Windows system might use and Linux; otherwise, you might not even see those files when mounted on a Linux system.

Resurrected sections in the Expert Partitioner

We keep bringing the functionality from the old Partitioner back to the Storage-ng reimplementation. During this sprint, it was the turn of the NFS and Device Graph sections.

The NFS case is a little bit special from the technical point of view since it’s the only section not managed directly by the Expert Partitioner. Instead, an embedded version of yast2-nfs-client is executed when visiting that section. The same approach has been followed in this reimplementation, which means NFS is the only section in which the old Partitioner and its Storage-ng clone will offer an absolutely identical experience and behavior (including both features and bugs). Just a heads-up: NFSv4 support is still not fully functional in libstorage-ng, so the check-boxes about the NFS version may be ignored until that support reaches your distribution. 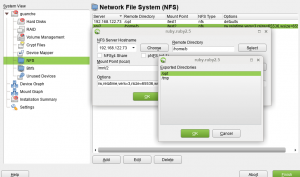 On the other hand, the “Device Graph” section was, as most of the new Partitioner, rewritten from scratch. In addition to the already known graph showing how the system is going to look after applying the changes, it includes now a representation of the current system in a separate tab. Both graphs are interactive, double-click on any node takes the user to the corresponding section of the Partitioner. 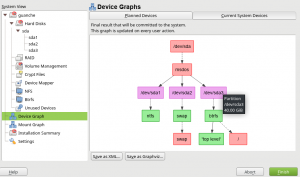 As you can see in the previous screenshot, the usual button to export the graph to Graphviz format is not alone anymore. Its new friend allows exporting the graph to the very detailed XML format used by the YaST Team to reproduce test scenarios.

Of course, the “Device Graph” section is not available if using the text-based ncurses interface, as you can see comparing the left part of the following screenshot with the previous one. 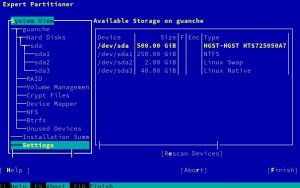 Our new Expert Partitioner was already able to manage LVM volume groups and logical volumes since several weeks ago. But now it also recovers its great ability to work with LVM thin pools and volumes. LVM thin provisioning is a powerful technology, very useful in cases where you need to administrate storage resources for a large group of users. Basically, thin provisioning allows you to provide more storage space than it is actually available in the system. You can increase the real hardware storage only when it is really required. For more information about LVM thin provisioning, you can find a great guide in this link. 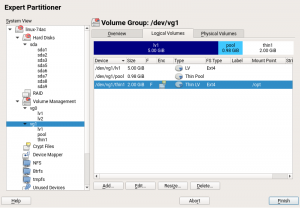 Apart from creating new thin pools and volumes, options for editing, resizing and deleting are now also available for all kind of logical volumes: normal volumes, thin pools and thin volumes. In the case of resizing a thin pool, you will be warned when the resulting pool is overcommitted. Take a look at the following screenshot. 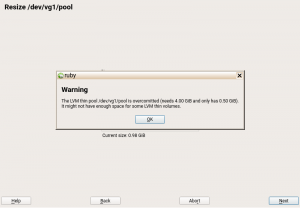 In older versions, when the proposed partitioning in a profile and it did not fit in the disk, AutoYaST tried its best to reduce the biggest partition. A typical use case was to set the root (/) partition to a huge value, so the profile could be used in systems with different disk sizes (as AutoYaST will take care of reducing that partition to make it fit). To be honest, the best solution in that scenario would be to set the size to max, so AutoYaST will do what’s expected.

However, if for any reason the wanted layout does not fit, AutoYaST is now smarter about what to do: instead of blindly reducing the biggest one, it will try to reduce all partitions in a (kind of) proportional way, informing the user about the new sizes. 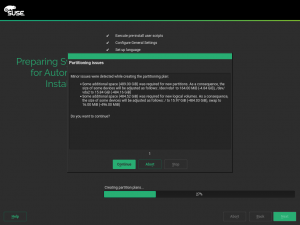 Up to now, not installable packages have been ignored silently by AutoYaST, which has been defined in the AutoYaST configuration file. From now on, the user will be informed that these packages cannot be installed.

During the last sprints, our team has been working hard in the integration of firewalld with AutoYaST and with the CWM library for opening ports / services in our different modules (http-server, squid, dns-server etc..). Here are some changes we did during this last sprint:

As we now adopted firewalld in our distribution, there is no more reasons to have a YaST module for the firewall. Therefore, as you may see here, we discontinued the YaST Firewall module and we recommend to use firewall-config to configure your firewall via a user interface or firewall-cmd for the command line.

A new AutoYaST schema has been defined for firewalld configuration although the features supported are very limited.

We can configure properties like the default zone, the service state, the type of packages to be logged and zones specific configuration like interfaces, services, ports, protocols, and sources.

For example, a SuSEFirewall2 based profile defining some interfaces, services, and ports in the EXT zone like this one: 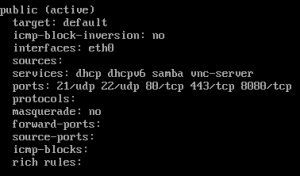 SuSEFirewall2 based profiles will continue working although limited to the configuration currently supported by YaST.

During the autoinstallation, an error will be shown if the profile has some property not supported, however, we will able to continue with the installation and also a warning will be shown suggesting the use of the new schema even when all the properties are translatable.

In YaST, CWMFirewallInterfaces module provides a set of widget definitions for opening services in zones through a selection of interfaces (each interface belongs to a ZONE). 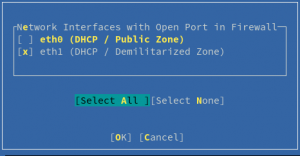 The module has been adapted to work properly with the new firewalld API.

If a firewalld service is not defined (probably because the package shipping the service definition has not been adapted yet), then the CWMFirewallInterfaces widget will show a list of missing services suggesting to deploy them to be able to configure the firewall.

Move from Xinetd to Systemd sockets

As requested by our friends from packages, now the future of starting service on demand is systemd sockets instead of xinetd. There are multiple reasons for that, but for us the most important one is that we can concentrate in one thing and do it properly.

It’s hard to support different ways to start services on demand and especially to handle such a situation when a user can set it up with sockets. Our old approach to make it happen was to set up the start of services on demand with xinetd. However, this approach is really hard to debug. Besides this problem, we also would like to unify our approach with the one suggested by packagers people.

So what have we done in this last sprint? The goal was to do some research, to create a proof of concept on one specific module and to find potential obstacles when unifying approaches to start services on demand. We found out that the conversion from xinetd to systemd sockets is quite easy, but also cannot be done automatically. Basically, what we need to do is to use systemctl call (which we already support) to activate the socket that is provided by the package instead of our old approach, which is to write a file into /etc/xinetd.d/ and to reload xinetd. Such a change will make our life much easier than previously.

The hardest part is that xinetd configuration file also often contains the service configuration that YaST can and would like to modify. This is no longer possible with systemd sockets and it is also the reason that we cannot automate this conversion.

So how will we proceed with the conversion of the YaST modules? We first checked all modules that use xinetd and we verified that, for the majority, the conversion is straight-forward. YaST also has a module for inetd configuration, which no longer makes sense, so the plan is to drop it in the near future and to allow socket activation in services manager module.

A problematic module is ftp-server, which supports two backends: vsftp and pure-ftp. This is problematic because pure-ftp does not support systemd-sockets, only xinetd. We plan to discuss how to handle it, as we are also not happy that we support two backends, because it makes the life of our users harder when they just want to quickly configure a ftp server. For SLE users we already support only vstftp, so if we agree on it, we will probably also support only this server in YaST. But right now nothing is set in stone.

Once again we have to mention our battle with memory consumption. This time the problem happened within the NET iso for Tumbleweed, which should need no more than 1 GiB of memory during the installation process.

In the beginning of our research, we had no suspicious code to look at, we just knew that it could be related to the fact that the NET iso was using the whole repository of Tumbleweed (over 60k packages) while the DVD iso uses only a subset of packages.

So which technique did we use to find the problematic part of the code? We changed logging in order to append the memory status of the whole process to each log line. By using this approach we quickly identified the problematic part of the code. This problematic code was responsible only for logging, but as it was searching for all packages and loading all packages properties, it was consuming a huge amount of data and causing this memory issue.

As a hotfix, we removed this logging from packages and kept it only for patterns and products, which is more important for us and has low memory consumption. We also looked into all code that searches through all packages properties and we reduced it as much as we could. Finally, we forced the Ruby garbage collector to run before the processes of disk preparation and rpm installation, reducing the chances that the memory consumption of the installation process goes up.

Once again we had a happy end and we are now able to install the NET iso with 1 GiB of memory when using the graphical installer.

As we’re getting closer to finish SLES 15, we’re getting busier and busier with features and bugs to finish. Therefore, YaST team is already working hard on Sprint 51 and we’re looking forward to come back to you in two weeks with much more cool stuffs that we’re doing. Meanwhile, have fun and stay tuned!