As the release dates for SUSE Linux Enterprise 15 and openSUSE Leap 15 approach, we keep adapting YaST to make easier for our users to take advantage of all the new features that these rock-solid operating systems will bring.

During the last two weeks that has implied, apart from regular bug fixing that we usually don’t cover here, working on AutoYaST, improving Storage-ng and polishing several aspects related to modules and extensions, like their registration and licenses.

Let’s start with the rewritten Partitioner that is part of yast2-storage-ng.

Setting the right partition id (also known as partition type) for each partition is an important part of the system setup that is often overlooked. Our Partitioner has always displayed in a prominent place the widget allowing to set that id, suggesting always the best value based on the selected role and the chosen file system type. But in many cases, that was more than a simple suggestion. In the old Partitioner (and in the new one until this sprint) the value of the partition id field (Linux, swap, Linux LVM, etc.) could only be manually edited in case the user had selected to not format the partition. When the option “Format device” was selected, the automatically chosen value could not be changed.

In SLE15 and openSUSE Leap 15 (and quite soon in openSUSE Tumbleweed), it will be possible to modify the id, no matter if the partition is going to be formatted or not. Of course, the logic to propose the best option every time the user selects a file system type is still there, but now it can be always overridden if the user wish. That change resulted in a small rearrangement of the widgets in that screen, as you can see below (remember we are trying to be very conservative with the UI changes in the Partitioner). 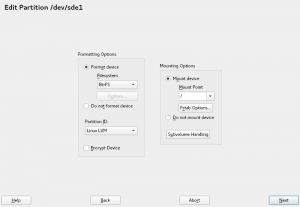 In our previous report we explained some of the aspects in which the Direct-access storage devices (DASD) used in s390 mainframes are different from regular hard disks. But as you can imagine, there are more differences… and we know our readers love to learn new stuff while enjoying our reports.

In short, there are two possible kinds of DASDs devices: Extended Count Key Data (ECKD) and Fixed Block Architecture (FBA). As explained in the previous report, the ECKD devices need to be formatted at low-level in order to be used by the operating system and, moreover, there are two possible low-formats for them: Compatible Disk Layout (CDL) and Linux Disk Layout (LDL).

And now the fun – ECKD devices formatted as LDL do NOT have a partition table. FBA devices can potentially have one, but it’s also often skipped. To manage those DASDs without partition table, the Linux kernel simulates an implicit single partition taking the whole disk. Of course, working with such implicit partitions implies some restrictions, and we have introduced several controls to make sure things stay under control in the storage-ng Partitioner. For example, an error message is now shown if the user tries to remove an implicit partition. 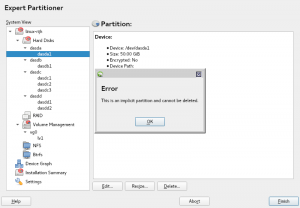 For curious readers, there is more information about DASD available in this link.

Partitioner: can’t resize a partition… but why?

In SLE15 and openSUSE Leap 15 we will report very detailed reasons why a partition or a file system cannot be resized, as you can see in this screenshot. 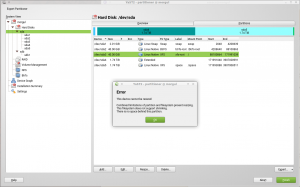 This used to be just a very simplistic message “Device cannot be resized”. But there may be many reasons for that, and sometimes different restrictions might contradict each other: While some type of file system only lets you grow, not shrink (e.g. XFS), the partition that the file system is on might not be able to grow, for example because there is another partition right next to it. We want to minimize user frustration that might happen when we only report the first reason, and when the user somehow managed to fix that problem, show another one that can’t be fixed.

As usual, this feature will be available in Tumbleweed in a matter of days.

Of course, the Partitioner was not the only YaST area to get attention during this sprint. Several aspects related to products, modules and extensions were also worked, with all the implications they have about registration, migration and licenses.

For the offline migration to SLE15 we reused some parts from the online migration which handles service pack upgrade. But it tuned out that the reused part was not correctly integrated into the installer and in some corner cases (registration errors) it did not behave correctly.

Moreover if the upgrade failed early then the system still contained a SLE12 installation but was registered as a SLE15 system on the SCC server. After booting the original SLE12 system the access to the online repositories was broken.

This sprint we fixed that so in case of registration error or when going back the original registration is restored. Now you can go back and choose a different system to upgrade and it will work as expected.

Additionally we fixed some small issues with custom repositories (add-on or driver updates) used at upgrade.

Usual readers of our blog already know that SUSE is taking extensions and modules to a whole new level in SLE15, making them a cornerstone of the system installation and upgrade process. As already explained in previous posts, that implies more complex dependencies between extensions and modules. All those mechanisms usually work nice… except a small problem we found out with beta versions.

If a given extension was in beta phase and some of its dependencies were also in beta, if the “Hide Beta Versions” checkbox was unchecked the system was displaying only the extension selected by the user, but not the auto-selected dependent beta extensions. Our SLE testers found that quite confusing. So to make everyone’s life easier, we fixed the behavior as shown in the following screenshot. 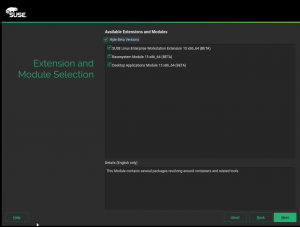 A look into the future: analyzing how we display licenses

Currently there are many different ways to handle and display licenses. That can happen during the installation or upgrade process, while adding additional products to an installed system and, last but not least, while using YaST2 Firstboot to perform additional installation steps on the first system execution.

Additional there are 3 different locations from which these licenses come from. They can be provided by the SUSE Customer Center, be provided by libzypp or come from a repository using a legacy approach.

To simplify and unify all that in a close future, the first step was researching all those possibilities and how they are handled in (Auto)YaST. The result of such research can be found in this document hosted on Github.

As you probably already know, starting with SLE-15, all products are distributed using one medium and you need to choose explicitly which product to install. Of course, if the medium only contains one product that would not be needed.

In AutoYaST profile the product is selected using the /software/products/product XML node:

Due to a bug, the cloned system exported the product short_name instead of the name, resulting in an internal error reported by the installer update and a later error during the auto-installation which aborted it because no product was selected.

So, during this sprint we have made improvements for both scenarios. 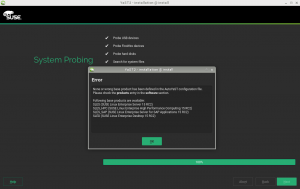 Document main differences in AutoYaST profiles between SLE12 and SLE15

The need to select a product is not the only relevant change affecting AutoYaST profiles for SLE15. There are many other significant changes in SLE15 compared to SLE12. Like the new modules concept, replacing SuSEfirewall2 with firewalld, replacing ntp with Chrony… Users wanting to reuse existing SLE12 profiles with SLE-15, will probably need to adjust them.

We have created this summary describing some of the most important changes in order to help with the conversion.

That document is just a preliminary and temporary work that is currently being reviewed and improved by the awesome documentation team at SUSE. Very soon (probably already done at the time you are reading this) the content will be merged and a new section titled “Main differences between SLES 12 and 15 profiles” will be available in the current guide for AutoYaST. Have we ever mentioned how much the doc team rocks? So please, use that last link as final reference instead of our temporary summary.

It is possible to setup the YaST-ntp-client module to sync the system clock at regular intervals. If that feature is used, YaST writes the needed configuration to a cron.d config file. We were still using “novell” as part of the name of such file, which was reported as a bug. It turned to be a good opportunity to take a look to a module that, as you can guess from that bug, we don’t update very often.

First of all, we made sure that newly written files will have a more up-to-date name. Straightforward and easy.

Last but not least, the third part was to adapt the package to be a better citizen in the RPM world, marking that file as ghost file in RPM spec. Now this command can recognize that yast2-ntp-client is responsible for that configuration file.

Only two months of countdown until the release date of openSUSE Leap 15! That means a lot of hard work ahead of us, so stay tuned for more updates.