Five weeks without blogging is certainly a quite an hiatus for the YaST Team. But fear no more, we are back!

This is the first time in quite a while in which our post is not titled “Highlights of YaST Development Sprint” and there are good reasons for that.

Now that openSUSE Leap 15.0 is out and SUSE Enterprise Linux 15 is ready to be shipped, we felt it was time to rethink our activities. For the duration of the storage-ng development, we had split the YaST team into two sub-teams: Team S for Storage and Team R for the Rest. But now new challenges await us; there are some things that were pushed aside because getting storage-ng into an acceptable state had top priority.

We decided we’d try an approach that other development teams in SUSE have already been using successfully: split up the YaST team into “squads” of 3-5 people each for the duration of a couple of sprints. Each squad is centered around a big topic that needs to be addressed. There is no long-term fixed assignment of anyone to any squad; the idea is to shuffle people and thus know-how around as needed, of course taking each developer’s interests into account. So the squads and the topics will change every few weeks.

Is this the pure spirit of Scrum and the agile bible? We don’t know. And we don’t care. The agile spirit is to adapt your work based on what makes sense in every moment. We work the agile way, so the way of working also has to be agile.

The next sprint’s report will contain more information about the first set of squads and the results they are delivering. But meanwhile we have done much more than just reorganizing our forces. While the sprint-based work was suspended (thus the blog title not containing the word “sprint”), the YaST team still managed to put out of the door quite some features, improvements and bug fixes targeting mainly Tumbleweed.

After quite some effort, the YaST team has completely rewritten the Expert Partitioner from scratch using the new storage stack (a.k.a. storage-ng). And although this new Expert Partitioner already offers practically all the same features than the old one, some last options are still coming. One them in the button for moving partitions, which saves us of a lot unnecessary work in many cases. For example, imagine you are installing openSUSE Tumbleweed and the installer automatically proposes you to create a partition for root and, just following it, a second partition for home. In case you don’t like the default proposed sizes (e.g. because you want a bigger root), you have to use the Expert Partitioner to fix the situation. You have to completely remove the home partition, resize root for enlarging it and then create home again with the same options than before.

Now, with the “Move” button, this kind of modifications are much easier. For that example, you can accomplish exactly the same by simply resizing home (without deleting it completely) and moving the resized home closer to the end of the disk (by using Move button). After moving the home partition, you have enough free space for enlarging the root partition. In the following screenshot you can see this dialog for moving partitions. 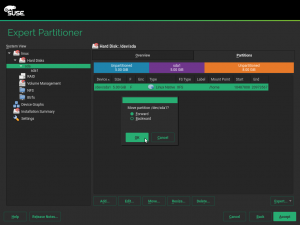 One important thing to take into account is that the movement of partitions is only possible for new partitions, that is, it is not possible to move partitions that already exist on disk. 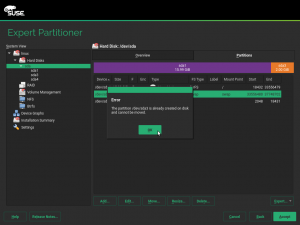 And speaking about the Partitioner and its relationship with the rest of the system, the transition from SysVinit to Systemd changed the behavior of (open)SUSE concerning mounting devices. Systemd generates mount units for various file systems, e.g. those listed in /etc/fstab. The result is that Systemd may automatically mount any file system, even if that file system has been manually unmounted before. This can be problematic when the user needs the file system to be unmounted for certain operations, like resizing or unplugging.

Thus, now the Partitioner uses a new mechanism to prevent that to happen during its execution. Starting with version 4.0.194, the yast2-storage-ng package includes and uses the script /usr/lib/YaST2/bin/mask-systemd-units to mask all mount and swap units one by one. The script might also be useful for direct use of system administrators. So… profit!

And since we speak about how Systemd has changed the way the overall system works, it’s also worth noticing how more and more services has been adopting the Systemd journal for its logging purposes.

Some of the existing YaST modules to configure a given service include a button to show the logs of such service. In the past, they used to display the content of /var/log/messages with some basic filtering to ensure only the information relative to the service (e.g. tftp) was shown. But that didn’t work out of the box for services already using the Systemd journal, and we had gotten quite some bug reports about it.

Fortunately, the solution is really at our fingertips. You surely know by now that there is a YaST module for viewing the journal content with powerful queries for filtering, searching and so so on. The obvious solution is to use that YaST journal module also within other YaST modules, in order to show domain specific logs.

So far we adapted the YaST tftp module, but it will be easy to fix also other places that use the old approach that no longer works. And this is how it looks when you click the “Show Logs” button in the YaST module to configure tftp. 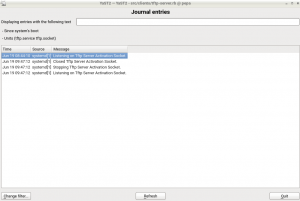 Usability Improvement in the Repositories Manager

The YaST repositories manager displays the repositories sorted by priority. But some people have a lot of repositories in their system and make no use of the priorities. Since there was not a clear second criteria, the order of the repository list looked quite arbitrary in those cases. Now all the repositories with the same priority are sorted by name, which makes more sense. See how it looked before the improvement. 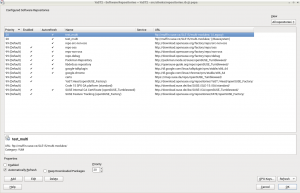 And compare to how it looks now. 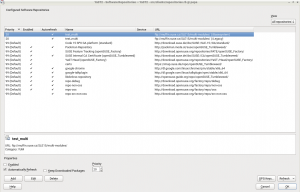 We got a rather interesting amount of bug reports for openSUSE Leap 15.0 about collisions between the grub2 and grub2-efi bootloaders during the upgrade process. The root cause was that the installation medium used a different booting mode than the installed system being upgraded. For example, the installed system uses EFI boot but the upgrade is executed from a DVD booted via legacy mode (i.e. disabling EFI). In that case, the kernel running from the DVD does not expose some devices that are needed to write to the EFI boot manager. Moreover, it causes troubles to the updater itself, which does not expect this situation.

Looking at the majority of the bug reports, it is obvious that in most cases it happens by accident rather than the user consciously trying to mix both boot modes. So to improve the user experience we added a warning that will be displayed when this situation is detected, before starting the upgrade. That gives the user the possibility to fix the problem or to continue if the situation is really intentional.

Below you can see how it looks, both in graphical and text mode, in a patched openSUSE Leap 15.0 installation media, since the feature was developed too late to be included in the official installation images. 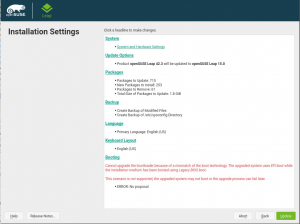 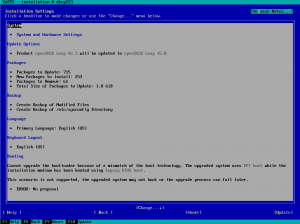 As commented at the beginning of the post, we have restarted the sprint-based work, although with a little twist to try out the squads approach. But before we come back to you to show the results of the first squad-based sprint, we have something else to do – Hack Week 17!.

Again it’s the time of the year for all SUSE Engineers (and any Open Source enthusiast willing to join) to innovate and learn new stuff. So please forgive us if we go too deep into playing and we are less responsive next week. See you again soon!