In the previous post we explained the squads idea and said we would tell more in this report.

Squads in the Team

We should mention that we finally did three squads for this sprint:

It’s quite unlikely that you have at home a disk storage larger than 8EiB (eight exbibytes, 263). But in enterprise or cloud world it might be possible.

And it turned out that the YaST package manager does not handle such large disks well. At the start you would see this false error message: 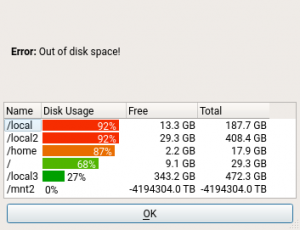 There are two problems:

It turned out that the problem was caused by using the signed 64-bit integer data type which overflows for values bigger than 8EiB and the number becomes negative.

We had to fix several places, each required some different solution. 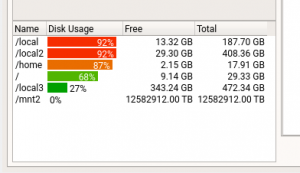 There is still some minor issue with the large numbers. The highest supported unit is TiB so even very big numbers are displayed in TiB units as on the screenshot above. The fix is planned to be released as a maintenance update and this change would break the backward compatibility so we will improve it later but only for the future releases.

But the problem was how to test the behavior? You could fake some numbers in the code but for full testing or QA validation it would be nice to test on a real disk. But you usually do not have such a large storage for testing…

Fortunately in Linux it is possible to fake such large file system quite easily using sparse files and loop devices. Here is a short how to:

Note: Obviously even if you have a 12EiB filesystem you cannot save there more data than in the real file system below (in /tmp in this case). If you try you will get write errors, there is no prepetuum mobile…

Speeding Up Unit Tests and Travis Builds in yast2-storage-ng

The new yast2-storage-ng package has a quite large set of unit tests. That’s good, it allows to have less buggy code and make sure the features work as expected.

On the other hand the drawback is that running the tests take too much time. If you have to wait for 3 or 4 minutes after any small change in the code then either you waste too much time or you do not run the tests at all. So we looked into speeding up the tests.

The main problem was that all tests were executed sequentially one by one. Even if you have a multi CPU system only one processor was used. It turned out that using the parallel_test Ruby gem allows easily running the tests in parallel utilizing all available processors.

The only possible problem is that there must not be any dependencies or conflicts between the tests otherwise running them in parallel would fail. Fortunately there was only one small issue in the yast2-storage-ng tests and we could enable the parallel tests without much work.

Also the Travis job took quite a lot of time. Running the tests in parallel helped a bit at Travis but still was not good enough.

Fortunately Travis allows running multiple jobs in parallel. Therefore we split the single CI job which runs the tests, builds the package, runs syntax check, etc… into three independent groups which can be started in parallel.

Here are some real numbers to see the speedup:

This allows us to continue with adding even more tests into the package.

What Packages are Provided by a Product Extension/Module?

In the Software Management module we have a Repositories view where you can see the packages grouped by the repository that provides them. But this is not really helpful if you want to see what is delivered with a product Extension or Module, because each product module is composed of several repositories: the originally released packages, the updates, the sources, the debuginfos.

Fortunately, the repositories for each product module are grouped together in a repository Service, and we have added a Services filter to Software Management. 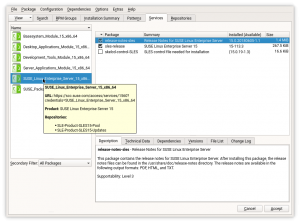 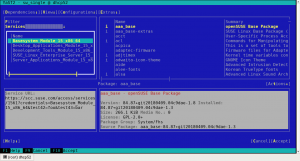