We have to admit that lately we have not been exactly regular and reliable in delivering our blog posts. But with the vacation season coming to an end, we are determined to recover the good pace. Since the proof is in the pudding, here is our latest report, just one week after the previous one.

Improving the user experience in the Services Manager

And talking about the previous report, we presented there several improvements in the YaST Services Manager module, including the new “Apply” and “Show Log” buttons. With the “Apply” button, all changes performed over the services are applied without closing the Services Manager, which allows you to continue using it and to inspect the logs of a service without relaunching the Services Manager again. But this new “Apply” button only makes sense when there is something to save, so during this sprint we have improved the UI to disable the button when nothing has been changed yet. In addition, now it is easier to know what we have edited so far in the Services Manager. For every change over a service, the new value is explicitly highlighted by using the special mark (*). For example, when you change the start mode of a service from “On boot” to “On demand”, you will see “(*) On Demand” in the corresponding column, see example. 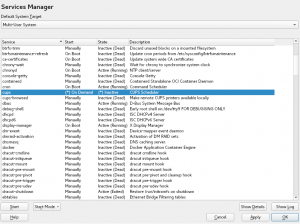 The list of services and the changes performed on them can be quite long. So in addition to the new mark, now a confirmation popup is shown up when using the “Apply” or “OK” button. This popup will present a summary with all changes that will be applied, that is, what services will be started or stopped, what services will change its start mode to “on boot”, “on demand” or “manually”, and even which will be the new default Systemd Target in case you have modified it. See an example in the following screenshot. 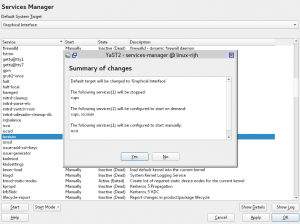 These improvements will reach openSUSE Tumbleweed soon and will be available in the upcoming versions of SLE (SLE-15-SP1) and openSUSE Leap (15.1).

Related to the changes in the Service Manager and in a more developer-oriented note. Yast2 Systemd (the set of YaST components that handle Systemd units under the hood) also has been completely reorganized in a more Ruby compliant way. Moving from YCP-style modules to a set of classes that behave like nice citizens of the Ruby ecosystem in their own proper namespace.

And to continue with refinements over the features introduced in the previous sprint, we have also improved the support for the so-called Xen virtual partitions that we presented in our previous post. As explained there, the old storage stack used to represent the Xen devices like /dev/xvda1 as partitions of a non-existing /dev/xvda hard disk. In the new stack, those devices are treated as they deserve, as independent block devices on themselves with no made-up disks coming from nowhere.

But AutoYaST profiles from a SLE-12 or Leap 42.x still pretend there are hard disks grouping the Xen virtual partitions. So in addition to the fixes introduced in the Partitioner during the previous sprint, we also had to teach the new storage stack how to handle fanciful AutoYaST <drive> sections like this, used to describe groups of Xen devices (xvda1 and xvda2 really exist in the system, xvda doesn’t).

The fix will be released as an installer self-update patch so users installing SLE-15 (with access to a self-update repository) can take advantage of it. In the mid term we will have to come up with a more realistic format to represent such devices in the AutoYaST profiles, but so far the limitations of the current AutoYaST format enforces us to keep the current approach.

But that’s not the only new skill of Storage-ng for this sprint. It also learned how to better manage inactive RAID arrays. MD RAID arrays are built to handle failures of the underlying physical devices. When some of the devices fail, the RAID becomes “degraded” which means the data is still accessible but it’s time to fix things. When too many devices suffer a fault, the RAID becomes inactive and it cannot operate any longer until it’s repaired. Our Partitioner was not handling this situation well, popping up a generic “unexpected situation” error message. 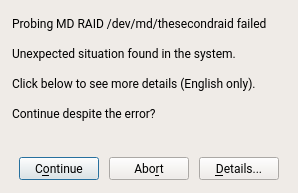 We have fixed that, and the storage stack doesn’t go nuts any longer if an inactive RAID array is found. Even more, it now shows an “Active: Yes/No” field under the RAID heading to inform the user in case the RAID is in such bad shape. 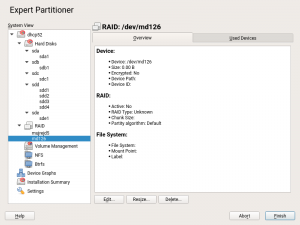 All that will be soon available as a maintenance update for SLE-15 and Leap 15.0. So far, no mechanisms have been introduced to stop the user from modifying an inactive RAID array with the Partitioner. That will come in the future, together with other MD RAID improvements in Storage-ng targeting future releases of SLE and openSUSE Leap.

Fortunately the fix was small and allows adding the new media correctly. We plan to release a maintenance update for SLE15, openSUSE Leap 15.0 and SLE12-SP3. It turned out that the code in SLE11-SP4 is more robust and does not crash so we do not need an update there.

We recently got a bug report about how hard was to read the help text in the installation screen explaining the system roles. So we took it as an opportunity to try how flexible our help text system is. Adding some richtext format made it look much better in graphical mode and also surprisingly well text mode. Let’s see some screenshots from Leap 15.0, although the fix applies to as well to openSUSE Tumbleweed and the SLE15 family.

This is how it looked before the fix. 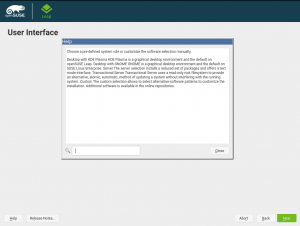 And that how it looks now, in both Qt and Ncurses, with the new format. 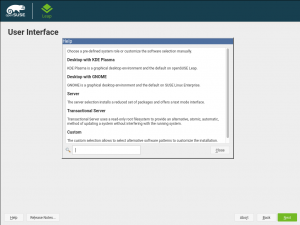 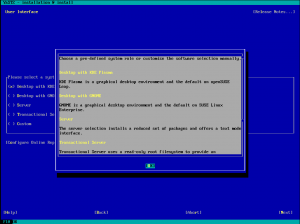 The YaST HTTP server module allows enabling the PHP support in the Apache web server configuration. However, as the module is not actively developed it turned out that the PHP support was broken. YaST wanted to install the apache2-mod_php5 package which is not available in openSUSE Leap 15.0 or SLE15, there is a newer apache2-mod_php7 package.

After checking the other required packages it turned out that a similar problem exists for some other Apache modules. To avoid this issue in the future again we have added an additional test which checks the availability of all potentially installed packages. If there is a new version or a package is dropped we should be notified earlier by continuous integration instead of an user bug report later.

Of course, in addition to the mentioned highlights we have fixed several small and medium bugs. And we plan to continue improving YaST in many ways… and to keep you punctually updated. So don’t go too far away.