Another two weeks of development, another report from the YaST team.

During this sprint, we have been working to improve the usage and installation experience in many areas, including but not limited to the following:

Let’s dive into the details.

Changes in the Partitioner UI to Unleash the Storage-ng Power

We have explained already in several previous posts how we were struggling to come up with a set of changes to the user interface of the Partitioner that would allow to expose all the new functionality brought by storage-ng, while still being familiar to our users and fitting in a text console with 80 columns and 24 lines.

We finally implemented the interface which fits into a 80×24 text console and allows all kind of operations. Check that document for more info about the behavior and its rationale.

But what does “all kind of operations” mean? For example, it means it’s possible to start with three empty disks and end up creating this complex setup using only the Partitioner. 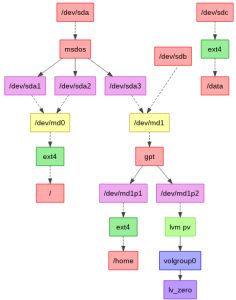 The general approach of the new UI is described in the linked document. But since an image is worth a thousand words (and an animation is probably worth two thousands), let’s see how some part of the process to create the complex setup described about would look in a text console.

This is how you can now directly format a disk with no partitions.

Playing with the partitions of a disk is also a good way to get a feeling on how the buttons are now organized and how they dynamically change based on which row is selected in each table. Click on the following image to animate it and see those views in action. 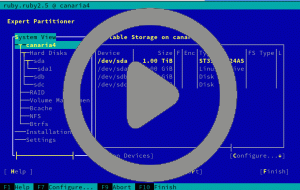 And for a full experience of completely new stuff. Click on the image below to see an animation showing the whole process of creating an MD RAID on top of two full disks and then creating partitions within the resulting RAID. 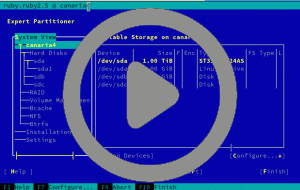 But although the text mode is the limiting factor to design a YaST UI, many users install their systems and use the Partitioner in graphical mode. For those wondering how the reorganized buttons look in that case, here are some screenshots of the installation process of the upcoming SLE-15-SP1 (static screenshots this time, we already had enough animations for one post). 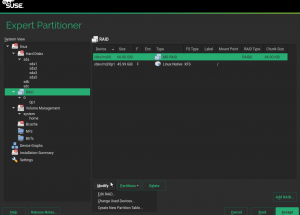 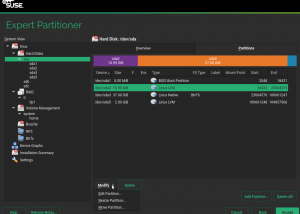 Surely most Partitioner users have recognized the style of the visual representation used above for the complex example setup. As you know, the Partitioner offers similar representations in the “Device Graphs” section, both for the original layout of the system and for the target one.

After adding support for Bcache to the Partitioner we detected a small but annoying problem in those graphs. The caching devices were using their UUID as labels, which had two drawbacks.

So know we use a fixed “bcache cache” label for all cache sets, which looks like this. 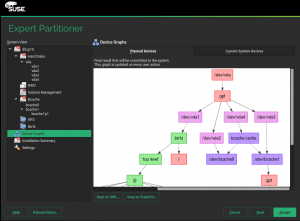 As opposed to the old way with empty boxes. 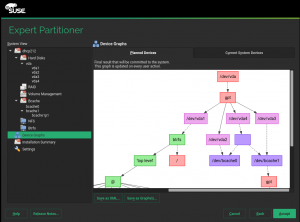 And since we mention the Bcache support in the Partitioner, it’s worth noticing that the implementation continues moving forward at good pace. During this sprint we implemented a first version of the operations to add a new Bcache device and to delete it.

When adding a new device, the only options that can currently be defined is which devices to use to construct it. But the next sprint has started and you can expect more options to be supported in the near future. 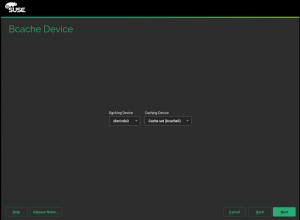 When the Bcache device is created, then it can be formatted, mounted or partitioned with the same level of flexibility than other devices in the system. So soon (after the usual integration and automated testing phases) Tumbleweed users will be able to use the YaST Partitioner to test this exciting technology.

Of course the operation to delete a Bcache device offers the usual checks and information available in other parts of the Partitioner, like shown in the following screenshot. 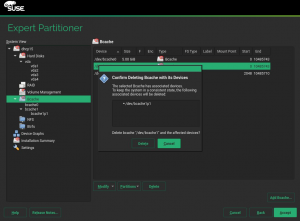 Both screenshots are taken with an updated version of the installer of the upcoming SLE-15-SP1, since this functionality will be available in such distribution and, of course, also in openSUSE Leap 15.1.

As those following our blog already know, the YaST Team is also somehow responsible for the development and maintenance of Snapper, the ultimate file-system snapshot tool for Linux. And Snapper has also received some usability improvements during this sprint.

For systems with btrfs and quota enabled, the output of “snapper list” now shows the used space for each snapshot. The used space in this case is the exclusive space of the btrfs quota group corresponding to the snapshot.

For more details about this change, its advantages and limitations, check the new post at the Snapper blog.

The role selection dialog in SLE-15 is always displayed in the installation workflow. However, it does not make much sense to display it if there is only one role to select. When you do not register the system and do not use any additional installation repository then in the default SLES-15 installation you can see only the minimal system role. 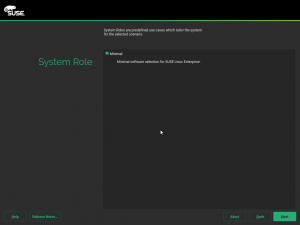 In such case you cannot actually change anything as the only role is pre-selected by default and the only thing which you can do is to press the Next button.

Therefore we improved in for SLE15-SP1, if there is only one role to select then the role is selected automatically and the dialog is skipped.

In addition to that, many of the role descriptions have been adapted and simplified to, hopefully, be more clear.

YaST Firstboot in devices with no hardware clock

SLE and openSUSE can be installed on a great variety of devices, including some system that doesn’t include a hardware Real Time Clock, like the popular Raspberry Pi. That means the usual mechanism to establish the current date and time (using the hwclock command) fails in such devices. That general problem was detected during the usage of YaST Firstboot to configure new devices.

So now YaST detects situations in which there is no Real Time Clock and uses the date as an alternative to set the date and time. This fix, already submitted to openSUSE Tumbleweed, will be available in all upcoming versions of SLE (like SLE-12-SP4 and SLE-15-SP1) and openSUSE Leap.

Better integration of the new Firewall UI with AutoYaST

On the previous report we anticipated the new UI we are building for configuring Firewalld from YaST. During this sprint we have been focusing on some aspects that need to be finished before we can release this new functionality.

Now this UI can be invoked from the AutoYaST module in YaST, meaning it can be used to import and then fine tune the current configuration of the system so it can be exported to an AutoYaST profile.

And since we are already in animation mood, check how the new UI can be used to define an AutoYaST profile.

Very soon the whole functionality will be ready for prime time and we will release it together with a separate blog post to explain all the details.

We are already working on the next sprint, with special focus on AutoYaST, on Snapper and on improving the installation experience in several scenarios. As mentioned above, it’s likely that you will get more news from us (about the new Firewalld support) even before that sprint is finished.

But if you can’t wait for more news, don’t hesitate to visit us on our Irc #yast channel on Freenode. Otherwise, see you here again soon.