Although there is much more work behind this sprint, we will have a look at these changes in this report:

But that’s not all. We have some pretty exciting news regarding the LibYUI Testing Framework which, hopefully, will reduce the hassle of maintaining YaST openQA tests in the future. If you are interested, we published a separate post a few days ago with all the details about this topic.

Submitting First Bits of the YaST Network Refactoring to Factory

yast2-network 4.2.2 is the first version which includes some code from the ongoing refactoring effort. As we announced in our last report, we have just started and there is a long road ahead of us, but you can see some results already in the routes management area.

Additionally to cleaning up and improving the codebase quality, we are fixing some bugs and introducing some minor enhancements along the process. For instance, version 4.2.2 permits to have multiple default routes and does not drop extra options for them. 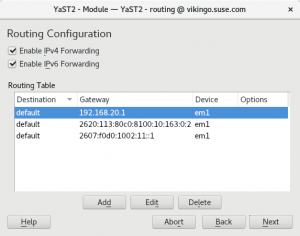 If you want to know more details about the process, you might be interested in the kickstart meeting notes that we added to our repository a few days ago.

During the previous sprint, AutoYaST was powered again with the capability of installing onto an NFS share. That feature was available in SUSE Linux Enterprise 12 (and openSUSE 42.x) but, for several reasons, we did overlook it when the new storage stack was re-implemented for (open)SUSE 15.

The problem with this feature in older versions, apart of not being documented at all, is that it requires to use some hacks and a non-validating AutoYaST profile. For that reason, we have redesigned how NFS drives are described in the AutoYaST profile. With the new format, we have a drive section per each NFS share, for example,

Although the old format is still supported to keep backward compatibility, we encourage you to use the new one for now on. And of course, this feature will be appropriately documented in the official (open)SUSE 15 documentation.

Autologin is a feature that most modern display managers (KDM, GDM, SDDM, LightDM) offer as a convenience function for home users. Users reported that YaST also provided this for the “Server (text only)” system role where that does not make sense, so we fixed that.

Yet Another Qt Version

This is not actually a big deal; there is another version of the Qt libs which we use for the graphical version of YaST. Now it’s Qt 5.13, and we needed to adapt some functions that have become obsolete in the meantime. Fortunately, Qt always provides drop-in replacements for things they obsolete, so this was mostly a pretty mechanical task to go through the warnings about functions or classes that are now obsolete and replace them with the new counterpart.

But how long have we been doing that? Quite a while, actually; it all started with Qt 2.x in late 1999 for SuSE Linux 6.3. That was the first YaST2. It already came in both a Qt version with a graphical user interface and in a text-only (NCurses) version. 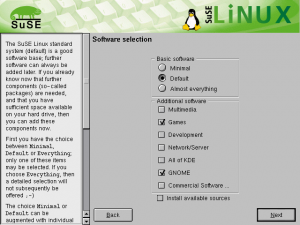 Back then we were more advanced than the KDE of that time: KDE 1.x was still using Qt 1.x, and the first version of YaST2 already used Qt 2.x. We kept upgrading throughout all the Qt 2.x versions and in SuSE Linux 9.0 we jumped to Qt3, which looked like this. 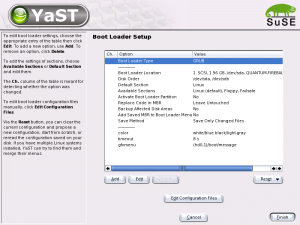 And as you know, that’s not the end of the story. We have kept updating through all the Qt 3.x, Qt 4.x and now Qt 5.x versions, as you can see in the following screenshot of the upcoming openSUSE Leap 15.1. It’s been a while: almost 20 years of happy Qt usage, always up-to-date. 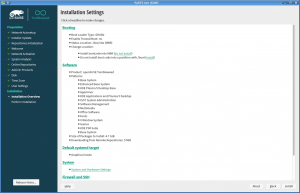 When it comes to UX, the tree of our new and shiny partitioner needed some love. We fixed an annoying issue which caused all the branches to be expanded after every change on any device. Besides that, we also changed the initial view. See the screenshot below in which sections -levels with icons like “Hard Disks” or “RAID”- are initially expanded and items representing devices are collapsed, not displaying, for example, the full list of partitions until the user decides to expand those. 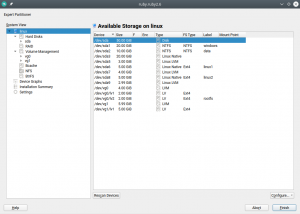 However, the bad news is that these changes will not be available in (open)SUSE 15.1, although you can give it a try as soon as they land in Tumbleweed.

The improved behavior of the navigation tree is not the only enhancement in the Partitioner we are preparing for the future (where “future” means Tumbleweed and the 15.2 releases of both SLE and openSUSE Leap). We also want to make possible to use the YaST Partitioner to define Btrfs file-systems that spread over several disks and partitions. That’s a pretty unique feature of Btrfs that combines at file-system level certain characteristics usually offered by software RAID and LVM.

But that also implies a quite different way of organizing the storage devices, which is a challenge to represent in the already complex user interface of the Expert Partitioner. So, first of all, we have put together this document describing all the struggles of representing advanced Btrfs features in the Partitioner, together with some possible solutions for the short and mid terms.

Please, feel free to provide feedback about the proposed solutions and to offer new ones. Help us to shape the future of the YaST interface!

As we mentioned at the beginning of this report, we owe you a blog post about the Libyui Testing Framework status. But as you wait for it, you might want to register for the openSUSE Conference or check the schedule.