Lately, the YaST team has been quite busy fixing bugs and finishing some features for the upcoming (open)SUSE releases.

Lately, the YaST team has been quite busy fixing bugs and finishing some features for the upcoming (open)SUSE releases. Although we did quite some things, in this report we will have a closer look at just a few topics:

As you already know, starting in version 15, SUSE Linux follows a modular approach. Apart from the base products, the packages are spread through a set of different modules that the user can enable if needed (Basesystem module, Desktop Applications Module, Server Applications Module, Development Tools Module, you name it).

In this situation, you may want to install a package, but you do not know which module contains such a package. As YaST only knows the data of those packages included in your registered modules, you will have to do a manual search.

Fortunately, zypper introduced a new search-packages command some time ago that allows to find out where a given package is. And now it is time to bring this feature to YaST.

For technical reasons, this online search feature cannot be implemented within the package manager, so it is available via the Extra menu. 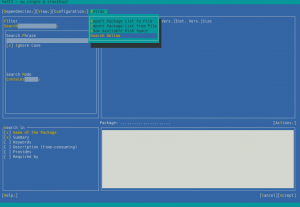 YaST offers a simple way to search for the package you want across all available modules and extensions, no matter whether they are registered or not. And, if you find the package you want, it will ask you about activating the needed module/extension right away so you can finally install the package. 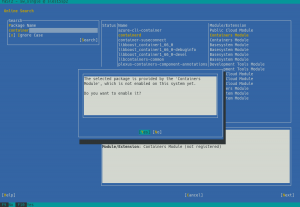 If you want to see this feature in action, check out the demonstration video.

Like any other new YaST feature, we are looking forward to your feedback.

We have mentioned a lot of times that we recently refactored the Network module, fixing some long-standing bugs and preparing the code for the future. However, as a result, we introduced a few new bugs too. One of those bugs was dropping, by accident, the network devices activation dialog for S390 systems. Thus, during this sprint, we re-introduced the dialog and, what is more, we did a few improvements as the old one was pretty tricky. Let’s have a look at them.

The first obvious change is that the overview shows only one line per each s390 group device, instead of using one row per each channel as the old did. 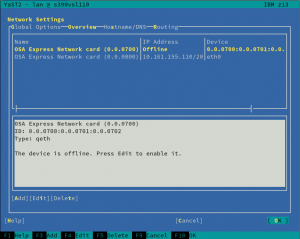 Moreover, the overview will be updated after the activation, displaying the Linux device that corresponds to the just activated device. 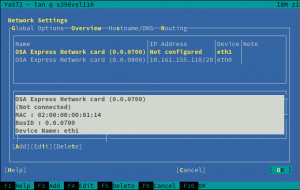 Last but not least, we have improved the error reporting too. Now, when the activation fails, YaST will give more details in order to help the user to solve the problem. 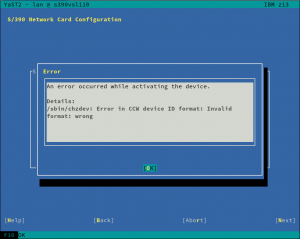 YaST command-line interface is a rather unknown feature, although it has been there since ever. Recently, we got some bug reports about its exit codes. We discovered that, due to a technical limitation of our internal API, it always returned a non-zero exit code on any command that was just reading values but not writing anything. Fortunately, we were able to fix the problem and, by the way, we improved the behavior in several situations where, although the exit code was non-zero, YaST did not give any feedback. Now that the CLI works again, it is maybe time to give it a try, especially if it is the first time you hear about it.

Adding Progress Feedback to the Partitioner

The Expert Partitioner is a very powerful tool. It allows you to perform very complex configurations in your storage devices. At every time you can check the changes you have been doing in your devices by using the Installation Summary option on the left bar. All those changes will not be applied on the system until you confirm them by clicking the Next button. But once you confirm the changes, the Expert Partitioner simply closes without giving feedback about the progress of the changes being performed.

Actually, this is a kind of regression after migrating YaST to its new Storage Stack (a.k.a. storage-ng). The old Partitioner had a final step which did inform the user about the progress of the changes. That dialog has been brought back, allowing you to be aware of what is happening once you decide to apply the configuration. This progress dialog will be available in SLE 15 SP2, openSUSE 15.2 and, of course, openSUSE Tumbleweed. 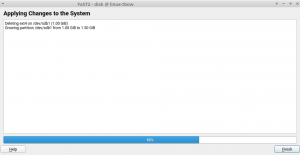 Bitlocker is a filesystem encrypting technology that comes included with Windows. Until the previous sprint, YaST was not able to recognize that a given partition was encrypted with such technology.

As a consequence, the automatic partitioning proposal of the (open)SUSE installer would happily delete any partition encrypted with Bitlocker to reclaim its space, even for users that had specified they wanted to keep Windows untouched. Moreover, YaST would allow users to resize such partitions using the Expert Partitioner without any warning (more about that below).

All that is fixed. Now Bitlocker partitions are correctly detected and displayed as such in the Partitioner, which will not allow users to resize them, explaining that such operation is not supported. And the installer’s Guided Setup will consider those partitions to be part of a Windows installation for all matters.

As explained before, whenever YaST is unable to recognize the content of a partition or a disk, it considers such device to be empty. Although that’s not longer the case for Bitlocker devices, there are many more technologies out there (and more to come). So users should not blindly trust that a partition displayed as empty in the YaST Partitioner can actually be resized safely.

In order to prevent data loss, in the future YaST will inform the user about a potential problem when trying to resize a partition that looks empty. 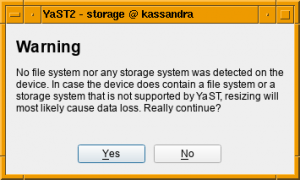 That special time of the year is already around the corner. Christmas? No, Hack Week! From February 10 to February 14 we will be celebrating the 19th Hack Week at SUSE. The theme of this edition is Simplify, Modernize & Accelerate. If you are curious about the projects that we are considering, have a look at SUSE Hack Week’s Page. Bear in mind that the event is not limited to SUSE employees, so if you are interested in any project, do not hesitate to join us.