Although SUSE has changed to remote working mode, the YaST team has remained focused and delivered some interesting stuff during this sprint.

Due to recent events, many companies all over the world are switching to a remote working model, and SUSE is not an exception. The YaST team is distributed so, for many members, it is not a big deal because they are already used to work in this way. For other folks it might be harder. Fortunately, SUSE is fully supporting us in this endeavor, so the YaST team has been able to deliver quite some stuff during this sprint, and we will keep doing our best in the weeks to come.

Before jumping into what the team has recently done, we would also like to bring your attention to the migration of our blog from the good old openSUSE Lizards blog platform to the YaST website. So, please, if you use some feeds reader, update the YaST blog URL to the new one.

Now, as promised, let’s talk only about software development. These days we are mainly focused on fixing bugs to make the upcoming (open)SUSE releases shine. However, we still have time to introduce some important improvements. Among all the changes, we will have a look at the following ones:

Expanding the Possibilities of Pervasive Encryption

Some months ago, in this dedicated blog post, we introduced the joys and benefits of the so-called pervasive encryption available for s390 mainframes equipped with a Crypto Express cryptographic coprocessor. As you may remember (and you can always revisit the post if you don’t), those dedicated pieces of hardware ensure the information at-rest in any storage device can only be read in the very same system where that information was encrypted.

But, what is better than a cryptographic coprocessor? Several cryptographic coprocessors! An s390 logical partition (LPAR) can have access to multiple crypto express adapters, and several systems can share every adapter. To configure all that, the concept of cryptographic domains is used. Each domain is protected by a master key, thus preventing access across domains and effectively separating the contained keys.

Now YaST detects when it’s encrypting a device in a system with several cryptographic domains. If that’s the case, the dialog for pervasive encryption allows specifying which adapters and domains must be used to generate the new secure key. 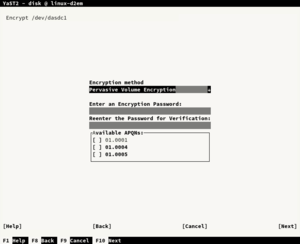 To succeed, all the used adapters/domains must be set with the same master key. If that’s not the case, YaST detects the circumstance and displays the corresponding information.

As our reader surely knows, YaST always ensures the presence of all the needed utilities when performing any operation in the storage devices, like formatting and/or encrypting them. If some necessary tool is missing in the system, YaST has always shown the following dialog to alert the user and to allow to install the missing packages with a single click. 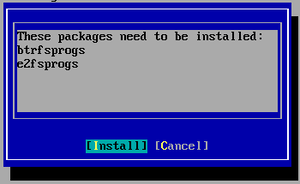 But the presence of those tools was only checked at the end of the process, when YaST needed them to modify the devices. For example, in the screenshot above, YaST asked for btrfsprogs & friends because it wanted to format a new partition with that file system.

If the needed utility was already missing during the initial phase in which the storage devices are analyzed, the user had no chance to install the corresponding package. For example, if a USB stick formatted with Btrfs would have been inserted, the user would get an error like this when executing the YaST Partitioner or when opening the corresponding YaST module to configure the bootloader. 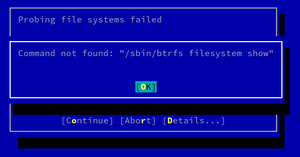 Now that intimidating error is replaced by this new pop-up that allows to install the missing packages and restart the hardware probing. As usual, with YaST, expert users can ignore the warning and continue the process if they understand the consequences outlined in the new pop-up window.

We took the opportunity to fix other small details in the area, like better reporting when the YaST Partitioner fails to install some package, a more up-to-date list of possibly relevant packages per technology, and improvements in the source code organization and the automated tests.

If you are an AutoYaST user, you undoubtely know that it is often too quiet and offers little information about inconsistencies or potential problems in the profile. For simple sections, it is not a problem at all, but for complicated stuff, like partitioning, it is far from ideal.

In (open)SUSE 15 and later versions, and given that we had to reimplement the partitioning support using the new storage layer, we decided to add a mechanism to report some of those issues like missing attributes or invalid values. There is a high chance that, using an old profile in newer AutoYaST versions, you have seen some of those warnings.

Recently, a user reported a problem that caused AutoYaST to crash. While debugging the problem, we found both raid_name and lvm_group attributes defined in one of the partition sections. Obviously, they are mutually exclusive, but it is quite easy to overlook this situation. Not to mention that AutoYaST should not crash.

From now on, if AutoYaST detects such an inconsistency, it will automatically select one of the specified attributes, informing the user about the decision. You can see an example in the screenshot below. 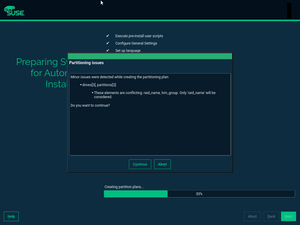 For the time being, this check only applies to those attributes which determine how a device is going to be used (mount, raid_name, lvm_name, btrfs_name, bcache_backing_for, and bcache_caching_for), but we would like to extend this check in the future.

Recently, one of our developers detected several usability problems in the iSCSI LIO Server module, and he summarized them in a bug report. Apart from minor things, like some truncated and misaligned texts, he reported the UI to be quite confusing: it is not clear when authentication credentials are needed, and some labels are misleading. To add insult to injury, we found a potential crash when clicking the Edit button while we were addressing those issues.

As usual, a image is worth a thousand words. Below you can see how the old and confusing UI looked like. 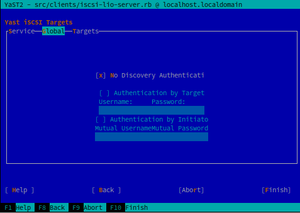 Now, let’s compare it with the new one, which is better organized and more approachable. Isn’t it? 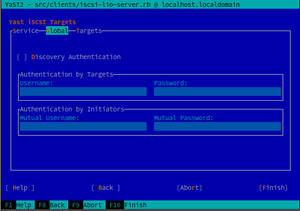 It is possible that, during the upcoming weeks, we need to make some further adjustments to our workflow, especially when it comes to video meetings. But, at this point, everything is working quite well, and we are pretty sure that we will keep delivering at a good pace.

So, take care, and stay tuned!