It's time for another report from the YaST trenches. This time with links to other interesting reads and with several calls to action.

It’s time for another report from the YaST trenches. This time, apart from this blog post, we have several other reads for you in case you are interested on YaST development or on Linux technical details in general.

And what is even better, many of those topics include a call to action for our loyal users and contributors.

Looking towards the future

Let’s start with a technical but rather significant detail. During our latest sprint we created a new SLE-15-SP2 branch in the YaST Git repositories, meaning that now the master branch is open again for more innovative features.

This is an important milestone from the development point of view, since it marks the point in which the team acknowledges 15.2 to be basically done and manifests the intention to focus in the mid and long term future. All the previous blog posts have been focused on describing features and fixes that will be present in the upcoming SUSE Enterprise Linux 15 SP2 and openSUSE Leap 15.2. From now on, you will read more about changes that go into openSUSE Tumbleweed and Leap 15.3 (also SLE-15-SP3, of course).

Getting some insights about the usage of YaST

In order to take decisions for the future, we would like to know how often the YaST modules are used and which ones are the most important for the users. But that is not easy because YaST does not collect any data, the only feedback we get are bug reports and feature requests.

During this sprint we tried to gather some data by collecting the bug and feature numbers from the change logs. We have not yet analyzed that data but it seems the more features we implement the more bug reports we get.

See this gist for the details and feel free to suggest any other system we could use to analyze the relevance of the different YaST modules and components.

Something we know for sure is that AutoYaST is critical for many users of SUSE Linux Enterprise and openSUSE. And, to be honest, our venerable unattended installer is showing its age. That’s why AutoYaST has a priority place in the mid-term goals of the YaST Team. The plan is to have an improved AutoYaST for SLE 15 SP3 and openSUSE Leap 15.3, although some fixes could be backported to SP2 and 15.2 if they are important enough.

During this sprint, we started gathering some feedback from our users and colleagues at SUSE. Additionally, we did some research about the current status of AutoYaST in order to identify those areas that are in need of more love. We have put all the conclusions together as a separate blog post. Check it if you are interested in what the future will bring for AutoYaST.

Now that we have started a new development sprint, there is an ongoing discussion that might be interesting for you about AutoYaST tooling. Please, check yast-devel, opensuse-autoinstall, or the opensuse-factory mailing lists and do not hesitate to participate. We would love to hear from you.

Expert Partioner: Leap 15.3 and Beyond

If you are not an AutoYaST user, don’t worry. There is still other area in which your input will be greatly appreciated by the YaST team. The interface of the YaST Partitioner has reached a point in which is really hard to deal with it and we need to find a way to move forward. 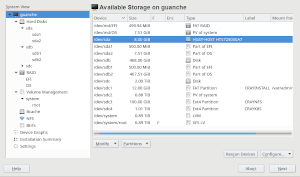 As a first step, we have created this document that explains the problem and we hope it can be used as a base to discuss the future of the Partitioner interface.

This is a very important topic for the future of YaST. All ideas are welcome. Feel free to join the mail thread, to create pull requests for the document, to discuss the topic at the #yast IRC channel at Freenode… whatever works for you.

We also decided this was the right time to introduce some relatively big changes in libstorage-ng (the library used by YaST to manage storage devices) aimed to improve the compatibility of YaST with some advanced LVM features.

For more than a year YaST has supported to setup and use bcache to speed up rotating disks by using a SSD as a cache. But that is not the only technology that can be used for that purpose. Some users prefer to use LVM cache instead of bcache since it has been around for a longer period of time and it offers some different features.

YaST cannot be used to setup an LVM cache system and we don’t plan to make that possible. Moreover, booting from LVM cache does not work in SLE or openSUSE as of this writing. But giving the user the freedom of choice has always been important for (open)SUSE and YaST.

To help customers using LVM cache, YaST can now recognize such setup and display it properly in the Expert Partitioner and many other parts of YaST. The following warning will not be longer displayed for LVM cache volumes in openSUSE Tumbleweed. 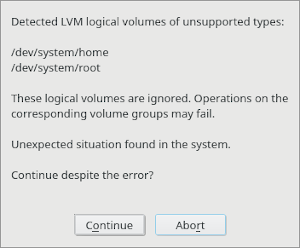 Instead, it will be possible to use those logical volumes normally for operations like mounting, formatting, etc. The ability to modify them will still be very restricted and it will not be possible to create new LVM cache volumes.

We plan to offer a similar limited level of support for other kind of advanced LVM volumes. Stay tuned for more news on this.

And talking about storage technologies, we also introduced a small change in the management of VFAT file systems for future releases of SLE and Leap (after 15.2). For some time we have wanted to stop using iocharset=utf8 in favor of utf8 when mounting a VFAT filesystem, as this is the recommendation in the kernel documentation.

There was also this bug that led to avoiding iocharset=utf8 for EFI system partitions (because iocharset=utf8implies that filenames are case-sensitive).

We took the opportunity to do some experiments and even look at the source code of the Linux kernel to find out what’s really going on. Why is utf8 so special and what can go wrong?

If you ever wondered what these VFAT charset related options mean and whether VFAT filenames are really case-insensitive in Linux as they are in Windows, have a look at this document we have created.

Although SLE-15-SP2 and openSUSE Leap 15.2 will still use the traditional mount options, the new approach (utf8 for all VFAT file systems) will land in Tumbleweed in a matter of days, as usual.

And, since we were already in research mode regarding storage technologies, why to stop there?

As a result of a recent bug in libstorage-ng which was tracked down to a RAID device block size issue the YaST team spent some time researching the topic in general.

If you’ve ever wondered what happens when you combine disks with different block sizes into a RAID, LVM, BCACHE, or BTRFS, have a look at our document.

In most cases, YaST and libstorage-ng already manage the situation well enough. But we found that in some cases we will need special handling of some situations, specially to guide our users so they don’t slip through the pitfalls. But that’s another story… for upcoming development sprints.

Not all changes and improvements done during this sprint are targeting the mid and long term. We also had time to introduce some improvements in the upcoming SLE 15 SP2. To be precise, in the corresponding version of SUSE Manager, the SUSE’s purpose-specific distribution to manage software-defined infrastructures.

Quite some time ago, we wrote this separate blog post to introduce some special features of the partitioning Guided Setup we have developed to allow SUSE Manager (and other products) to offer the users an experience tailored to their needs. 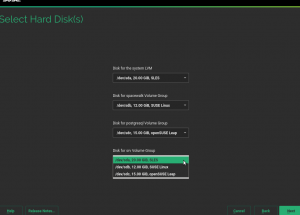 But we knew some of those features in our partitioning proposal had serious performance problems that affected the initial proposal, that is, the one the installer creates before the user has had any chance of to influence the result or to select the disks to use.

The SUSE Manager version for SLE 15 SP2 will finally introduce two system roles that use the new proposal (both indentified by the “multiple disk” label), so it was finally time to address those performance problems.

And we really improved the situation! If you want to know more, this pull request contains many details and the result of some benchmarks. Let’s simply say here that in some worst-case scenarios we managed to reduced the time needed to calculate the initial proposal… from several hours to half a second!

Summarizing what Leap 15.2 will bring

As our usual readers have had many opportunities to attest, the life of a YaST developer goes much further than simply coding. And with every openSUSE Leap release it’s time for us to take a look back to several months of work and, with our salesman hat on, summarize all the cool additions to YaST and its related projects.

In that regard, we have been helping the openSUSE marketing team to shape the release announcement for openSUSE Leap 15.2. You will have to wait to read such document in all its glory, but meanwhile you can check what we have added to the “Snapper”, “YaST” and “AutoYaST” sections of the Leap 15.2 Features Page. It’s a wiki, so feel free to add any important point we could have missed.

To Infinity and Beyond

A lot of interesting topics open up in front of the YaST Team. So it’s time for us to go back to the daily work. Meanwhile, enjoy all the reads and don’t hesitate to get involved taking part in the converstions, improving the wiki pages or in any other way.

Have a lot of fun!