Result of the Modernizing AutoYaST initiative

In April, we announced the Modernizing AutoYaST initiative. The idea was not to rewrite AutoYaST but just introduce a few new features, remove some limitations and improve the code quality.

Although they were not set in stone, we had some ideas about what changes we wanted to introduce. However, as soon as we started to work, it became clear that we needed to adapt our roadmap. So if you compare our initial announcement with the result, you can spot many differences.

This article describes the most relevant changes. If you want to try any of these features, they are already available in openSUSE Tumbleweed.

When AutoYaST generates a profile from an existing system, it includes a lot of information to reproduce the installation. As a consequence, those profiles are rather long, which makes working with them quite annoying.

However, it is not always clear when it is safe to omit some information from the profile without compromising the final result. To address this problem, we decided to introduce the concept of target. Thus, when generating a profile, you can ask AutoYaST to generate a more compact profile.

In my current machine, the size of the profile is reduced from 2201 lines to just 834. But which information is omitted? Let’s enumerate a few items:

Note that not all YaST modules implement support for this flag. Actually, in some cases, it does not make any sense.

When dealing with the installation of multiple systems, it might be useful to use a single profile that adapts to the system being installed at runtime. AutoYaST already offered two mechanisms to implement this behavior: rules and classes and pre-install scripts.

However, we though that it might be easier if you could embed Ruby (ERB) code in your profiles. The idea is to provide a set of helper functions that you can use to inspect the system and adjust the profile by setting values, adding or skipping sections, etc. It sounds cool, right? Let’s see a simple example.

The code below finds the largest disk by sorting them size and sets the value of the device element.

Of course, apart from a set of helpers (disks, network_cards, os_release or hardware), you have the power of Ruby in your fingertips. What about retrieving a whole section from a remote location? At some extent, it could replace the classes and rules feature.

Unfortunately, the documentation of this feature is still a work in progress. However, we expect to have it ready in the upcoming weeks.

Apart from introducing support for ERB, as described in the previous section, we improved script handling. Until now, Shell, Perl and Python were the only supported scripting languages. We removed this limitation and now you can use any interpreter available at installation time. Moreover, it is possible to pass custom options to the interpreter.

Additionally, we fixed a few issues and extended the error handling to inform the user when the script did not run successfully.

Building and tweaking your profile can be a time-consuming task. AutoYaST offers XML-based validation, but the sort of errors you can detect is rather limited.

To make your life easier, we introduced these new features to leverage profile validation:

When AutoYaST fetches the profile, it automatically performs the XML-based validation, reporting any error found. It works even if you are using features like Rules and classes or Dynamic profiles. However, it can be easily disabled by setting the YAST_SKIP_XML_VALIDATION parameter to 1 when booting the installer.

Regarding the check-profile, it basically uses part of the code that runs during AutoYaST initialization. It includes:

Needlessly to say that you should run this command with caution. Bear in mind that ERB and pre-installation scripts can run any arbitrary code. In fact, we are working with our security experts to make this command safer. See bsc#1177123 for further details.

Unlike a normal installation, AutoYaST still uses two phases, which are known as stages. The first stage is responsible for most of the installation tasks: partitioning, registration, software installation, network configuration, etc. Depending on the content of the profile, the second stage comes into play after the first reboot. It takes care of additional configuration processes, like setting the firewall rules, enabling/disabling services, etc.

To reduce the need for a second stage, we moved the processing of several sections to the first stage. At this point, these sections are processed during this stage: bootloader, configuration_management, files, firewall, host, kdump, keyboard, language, networking, partitioning, runlevel, scripts (except post-scripts and init-scripts, which are processed during the second stage), security, services-manager, software, ssh_import, suse_register, timezone and users. Thus if your profile does not contain any other section, you can happily disable the second stage.

A better UI to define the partitioning section

The user interface offered by AutoYaST to define the partitioning section was confusing, buggy and rather limited. Therefore we took the chance to, basically, rewrite the whole thing. 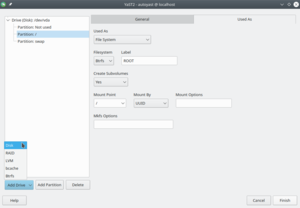 It is still a work in progress, but it is already much better than the old one. For instance, in addition to disks and LVM, it supports defining sections for RAID, bcache and multi-device Btrfs file systems.

It should be noted that these changes are already available in openSUSE 15.2 and SUSE Linux Enterprise 15 SP2, so you do not need to wait until 15.3 or SP3 to enjoy them.

New features and bug fixes are the most visible changes. However, as part of this process, we refactored a lot of code, improved code coverage, extended the documentation, etc. In general, we feel that we improved AutoYaST quality in a sensible way. And we hope you have that impression too in the future.