The new year comes with more news from the YaST development team, check them out!

2021 is here and it doesn’t look like it’s going to be a boring year… at least in the YaST side! The YaST team just restarted the work a couple of weeks ago and we already have some development news to share with you, including some improvements our users requested through the openSUSE’s End of the Year Community Survey.

That’s not the only installer behavior we have refined based on feedback from our users. In some scenarios, the logic used to decide whether an existing EFI System Partition (ESP) could be reused was getting in the way of those aiming for a fine-grained control of their partitions. That should now be fixed by the changes described in this pull request, that have been already submitted to Tumbleweed and will be part of the upcoming releases (15.3) of both openSUSE Leap and SLE.

We also fine-tuned how hibernation is configured during installation. To be precise, we improved the corresponding resume= parameter passed to the kernel by the bootloader. From now on, that parameter will use a device name that will be fully consistent with the names used in other parts of the installer and that will be often based on the swap UUID.

As usual, AutoYaST also got its quota of love during this sprint. This time on form of an usability improvement. As you may know, SUSE Linux Enterprise offers a whole set of products for different needs. When using AutoYaST to upgrade a system using a multiproduct repository, it’s necessary to specify the concrete product in the AutoYaST profile. When that was not correctly done, the system failed in a not-exactly-elegant way. In upcoming versions of products of the SLE family, that will be handled in a much nicer way. 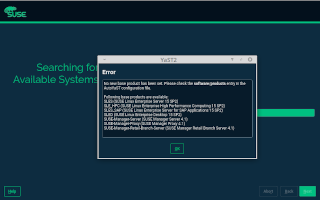 And apart from the installation and auto-installation process, we also introduced several small fixes and improvements in other parts of YaST. Like bringing up-to-date the options offered by yast2-vm, speeding up the process of reading the network devices in s390 mainframes, improving the usability when the hostname needs to be adapted… and many other things you can check in Github or the Open Build Service if you want to know more.

As you can see, the new year has not diluted our enthusiasm to keep improving YaST bit by bit. So now it’s time to go back to work, hoping to meet you again in a couple of weeks with more news. Have a lot of fun!