YaST in a YaST-less system

The fifth chapter for 2022 of the regular development reports from the YaST Team is on its way. We are just ironing up some details while we wait for the videos of the recent openSUSE Conference 2022 to be online. But fear not, we will not meanwhile abandon you into boredom. Quite the opposite, we have exciting news to share with you all!

Enjoy YaST Without Installing it

We all know how awesome YaST can be for administering your (open)SUSE system. From managing the software repositories and the installed software to adjusting the systemd services and sockets. From creating LVM logical volumes to configuring Kdump (or fadump). From inspecting the systemd journal to fine-tuning the boot loader. From configuring network interfaces to adjusting the mitigations for CPU vulnerabilities. From setting the firewall configuration to managing your subscriptions to the different SUSE products… and so much more!

But all that comes with a pretty obvious price. You must install YaST and all its dependencies in the system you want to manage. Those dependencies include the Ruby runtime, either ncurses or Qt (depending if you want the text-based or the fully graphical interface) and some other packages or libraries depending on what you want to achieve. For example, you need libzypp to install software or to manage the repositories.

What if you don’t want to pay that price? Well, we have an special offer for you! Now you can use YaST to administer your system without installing YaST or any of its dependencies. Ideal for lovers of minimal systems like the MicroOS variants of SUSE and openSUSE. All you need is a container engine like Docker or Podman… and you are using one anyways if you are using MicroOS, isn’t it?

How does it Work?

Another great news is that there is no black magic involved, just a bit of shell scripting. You can check the technical details at the yast-in-container repository. That tool only depends on Podman (or alternatively Docker) and offers a series of commands that are equivalent to the corresponding yast and yast2 command. The main difference is that those new commands grab YaST and run it in a container that will be transparently used to administer the host system. For example, the following commands would open the corresponding YaST module to manage repositories. The first in text mode and the second command with the full Qt graphical interface:

As you would expect, if the commands are executed without specifying any argument they will open the corresponding version of the YaST control center, displaying only the modules that are currently expected to work in a container (more about that below).

Remote Access Through SSH, X11… or a Web Browser!

You can of course use this nice YaST-in-a-box to manage your local system. If you install the yast-in-container package in a system with graphical interface you will even get a nice icon to launch it.

But what about remote administration? Of course, you can do it in the usual YaST way. That is, using the great text-based interface through SSH or even opening a remote graphical session with X11 or VNC. But those solutions require you to have some specific software installed in the device you are going to use for the remote access. But, if you don’t need to install YaST in the system to be managed, why would you need to install something on the other edge? The good news is that you don’t really need to - you only need a web browser!

Alongside the already mentioned commands to run YaST containerized on text and graphical modes, the package also includes a third one called yast2_web_container that will run YaST in a web session that you can later access by simply pointing your browser to the port 4984 of the system to be managed. 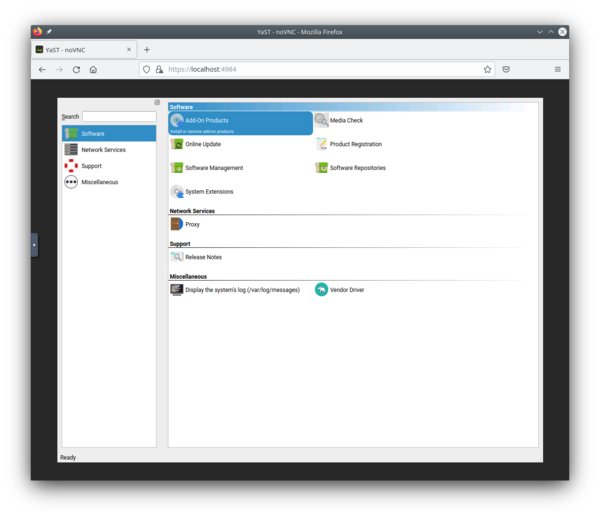 Ok, is not a modern mobile-first web interface but rather the graphical version of YaST running inside a browser window. But that should be enough for many cases. Authentication and certificates can be easily configured to secure that YaST instance.

What can I do?

The good news is that we plan to adapt more modules to be able to work in such an environment. And the even better news is that we expect most of them to be really easy to adapt. Basically all the YaST pieces that are used during a regular installation should be fairly easy to adapt. That includes the Partitioner, boot loader configuration, kdump, CPU mitigations and many more.

On the other hand, we don’t plan to adapt every single YaST module out there. For example, modules to administer services like Samba, an iSCSI target or the DHCP server will likely not be adapted unless we detect a real need for any of them.

As mentioned, we are already adapting more YaST components to be able to run containerized. But that’s not the only plan we have to move this nice project forward. We also want to reduce the size of the images downloaded and used by the containers, improve how VNC is used internally to provide the web access, rely on SLE BCI to build the whole system… there is plenty of room to keep having fun!

In addition, we have mentioned the MicroOS variants as possible candidates to make use of a containerized version of YaST. But the transactional nature of such distributions may challenge how some YaST modules work, no matter whether they run containerized or directly in the system. For example, the way to install software packages is completely different. So, in addition to the mentioned improvements to our containerized YaST, we are considering to adapt some parts of YaST as a whole to better handle the administration of transactional systems.

And, of course, we will keep you updated on all the steps through our usual channels. So stay tuned!