People do not live by YaST alone

We have been a bit silent lately in this blog, but there are good reasons for it. As you know, the YaST Team is currently involved in many projects and that implies we had to constantly adapt the way we work. That left us little time for blogging. But now we have reached enough stability and we hope to recover a more predictable and regular cadence of publications.

As you know, SUSE is developing the next generation of the SUSE Linux family under the code-name ALP (Adaptable Linux Platform). If you are following the activity in that front, you also know several so-called work groups has been constituted to work on different areas.

The YaST Team is deeply involved on two of those work groups, the ones named “1:1 System Management” and “Installation / Deployment”. You can read more details about the mission of each group and the technologies we are developing in the wiki page linked at the previous paragraph.

Since this blog is a well-established communication channel with the (open)SUSE users, we decided we will use it to report the progress on all the projects related to those work groups. That goes beyond the scope of YaST itself and even beyond the scope of the YaST Team, since the mentioned work groups also include other SUSE and openSUSE colleages. But we are sure our readers will equally enjoy the content.

Let’s start with an old acquaintance of this blog. In several previous posts we have already described D-Installer, our effort to expose the power of YaST through a more reusable and modern set of interfaces. We recently reached an important milestone in its development with the first version including a multi-process architecture. In previous versions, the user interface could not respond to user interaction if any of the D-Installer components was busy (reading the repositories metadata, installing packages, etc.). The new D-Installer v0.4 includes the first steps to definitely solve that problem and also other interesting features you can check at this release announcement. There are even a couple of videos to see it in action without risking your systems!

As you can see in the first of those videos, we improved the product selection screen and now D-Installer can download and install Tumbleweed, Leap 15.4 or Leap Micro 5.2.

But a new YaST-related piece of software cannot be really considered as fully released until it is submitted to openSUSE Tumbleweed. We plan to do that in the upcoming days, to ensure future development of D-Installer remains fully integrated with our beloved rolling distribution.

A New Reptile in the Family

Of course, D-Installer needs to run on top of a working Linux system. That could be the openSUSE LiveCD (as we do to test the prototypes) or some kind of minimal installation media. What if that minimal system is just a container completely tailored to execute D-Installer? It could work as long as you have a certain initrd (ie. boot image) with the capability of grabbing and executing containers. Say hello to Iguana.

Iguana is at an early stage of development and we cannot guarantee it will keep its current form or name, but it’s already able to boot on a virtual machine (and likely on real hardware) and execute a predefined container. We tried to run a containerized version of D-Installer and it certanly works! We plan to evolve the concept and make Iguana able to orchestrate several containers, which will give us a very flexible tool for installing or fixing a system in all kind of situations.

Just as we are looking into D-Installer as a way to reuse the YaST capabilities for system installation, you know we are also looking into containerization as a way to expand the YaST scope regarding system configuration. And we also have some news in that front.

First of all, we adapted more YaST modules to make them work from a container. As a result, you can now access all this functionality:

We are working on adapting more YaST modules as we write this. We hope to soon add boot loader or Kdump configuration to the portfolio. Maybe even the YaST Partitioner if everything goes fine.

On the other hand, we restructured the container images to rely on SLE BCI, which results on smaller and better supported images. But that was just a first step, we are now actively working on reducing the size of the current images even further. Stay tuned for more news and some numbers.

Cockpit with a Green Touch

Although using a containerized version of YaST will always be an option. Is expected that the main tool for performing interactive administration of an individual ALP host will be Cockpit. So we are also investing on improving the Cockpit experience on (open)SUSE systems. And nothing gives a better experience that a properly green user interface!

We improved the theming support for Cockpit (in an unofficial way, not adopted by upstream) and used that new support to make it look better thanks to the new cockpit-suse-theme package. 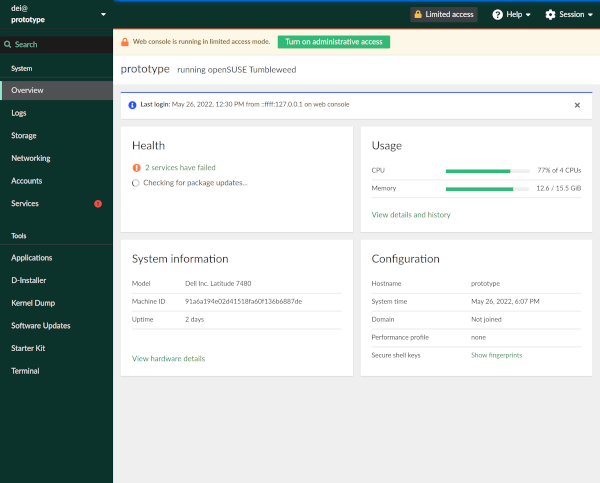 We took the opportunity to update the version of all Cockpit packages available at openSUSE Tumbleweed. So if you are a Tumbleweed user, it’s maybe a good time to give a first try to Cockpit!

As mentioned at the beginning of this post, we want to get back to the good habit of posting regular status updates, although they will not longer be so focused around (Auto)YaST. In exchange you will get news about Cockpit, D-Installer, Iguana and containers. So stay tuned for more fun!