The YaST Team offers some preview of features that will soon land in the installer and also a look on the progress of some ALP-related topics.

Lately in this blog we have been covering mostly developments in the area of ALP (Adaptable Linux Platform), although we never stopped improving how YaST works on our currently maintained systems. In this report we will start by taking a look to an installer feature we plan to release soon for openSUSE Tumbleweed and also as a maintenance update for the current versions of Leap and SUSE Linux Enterprise. Of course, that will not stop us from offering you a sneak peek about the mid-term future. The whole menu includes:

Security Policies in the Installer

We all know there is a series of good practices that must be observed when installing and administering any computer system in order to minimize the security hazards. In some cases, those good practices are formalized into a so-called security policy that defines the guidelines that must be observed in order for a given system to be accepted in a secure environment. In that regard, the DISA (Defense Information Systems Agency) and SUSE have authored a STIG (Secure Technical Implementation Guide) that describes how to harden a SUSE Linux Enterprise system.

The STIG is a long list of rules, each containing description, detection of problems and how to remediate problems on a per rule basis. There are even some tools to automate the detection and remediation of many of the problems in an already installed systems. But some aspects are very hard to correct if they are not properly set during the installation process of the operating system, like the need of encrypting all the relevant filesystems or honoring certain restrictions in how the devices are formatted and the mount points are defined.

So we are actively working on adding the concept of security policies to both the interactive installation and AutoYaST. It is still a work in progress and we will offer a more detailed review of the feature when it’s ready to hit the repositories. 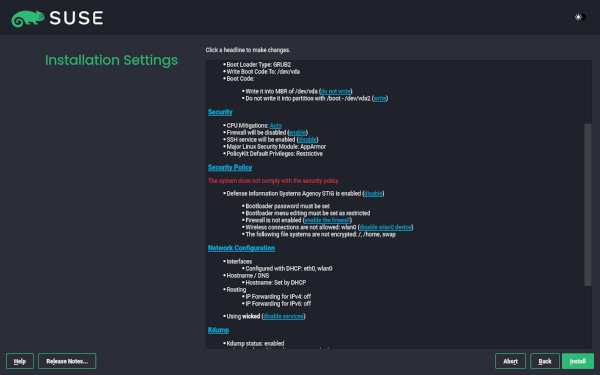 On other news, you know we have been working on making possible to execute YaST as a container. So far, it was necessary to execute a script in order to use the containerized version of YaST. It was even available as a package on openSUSE Tumbleweed. But now, with the recent advances on ALP and its concept of so-called workloads, we found a better way to distribute the YaST containers.

We have now three “official” containers for YaST. available at the repository SUSE:ALP:Workloads. Although the repository, as the name suggests, is supposed to provide containerized workloads to be executed on top of ALP, we have decided it will be the official source for containerized YaST no matter if you execute it on top of ALP, the latest SLE, the latest Leap or openSUSE Tumbleweed. It should work the same in all cases.

So from now on, you can execute a containerized YaST anywhere by doing:

Replace “ncurses” by “qt” or “web” to enjoy the alternative versions.

The route is a bit redundant and maybe it will change in the future, but that’s out of the control of the YaST Team. In any case, we will always use the official repository for ALP workloads.

Additionally, we are also proud of remarking that those container images include the YaST Kdump and YaST Bootloader modules. We recently adapted them to work containerized, which we consider an important milestone because it implies libstorage-ng is now able to perform a system analysis of the running host system from a container.

As you know, the main motivation to containerize YaST was making it available to ALP users. But ALP is a new concept in Linux distributions with an innovative approach to some areas of system management. So we didn’t expect YaST, containerized or not, to just work smooth out-of-the-box on top of ALP. Thus, we are doing a continuous evaluation of the situation in the early previews of ALP to detect the areas of YaST (or even ALP itself) that need fixing and to decide where to put the focus on every given moment.

The good news is that most things seems to work in the non-transactional variant of ALP. We only detected small problems that we are now tracking and will fix step by step as time permits.

But on transactional ALP systems, which likely will be the default version in most scenarios, we have a very visible problem with software installation. YaST does not use static RPM dependencies to enforce beforehand the installation of the tools it relies on. Instead, YaST installs any needed software on demand during its execution. That’s a problem in a transactional system, as defined by ALP or openSUSE MicroOS. On the bright side, we checked that working-around the software installation problem, most of the other functionality works just fine also in a transactional ALP system with the only exception of the previously mentioned YaST Kdump and YaST Bootloader. Although those two modules work fine containerized in any non-transactional system, we still need to find a way for them in situations in which /boot is not directly writeable.

In short, things look relatively promising for YaST on ALP, but we still need to do a lot of adjustments here and there. We will keep you informed of the progress.

As already mentioned, ALP is an innovative system and that not only affects YaST. Cockpit, the default platform for 1:1 system administration on ALP, also struggles with some of the particularities of the first prototypes of ALP, especially in its transactional flavor.

Thus, we are also investing quite some time testing all the Cockpit functionality on ALP and documenting which parts need tweaking… or even rethinking the Cockpit or the ALP approaches to some topics. As with the YaST case, we are already working on some aspects and we will keep you informed as long as we solve every existing problem.

Moving Forward with Iguana and D-Installer

Talking about ALP, you know we are using it as an opportunity to rethink how the (open)SUSE systems may be installed in the future on real hardware with complex requirements in terms of storage technologies, network setup, etc. In that regard, we keep developing D-Installer and Iguana.

In the case of the former, most recent news are about the internal architecture. You may remember from previous reports that we are trying to make D-Installer as modular as possible with separate processes to handle software management, creation of users, internationalization, etc. To make that mechanism more powerful, we defined now a D-Bus API so the different processes can interact with the user from a centralized user interface. See more details in the corresponding pull request.

In the case of Iguana we are focusing of expanding its scope (eg. making it useful in the context of Saltboot) and documentation. The Iguana Orchestrator (iguana-workflow) now comes with some examples for possible uses like running D-Installer as a set of two separate containers, one for the back-end and another for the web interface. If you want to run you own experiments, installing the iguana package from OBS will install a kernel and iguana-initrd, which then can be used for PXE boot or for direct kernel boot in virtual machines.

As you can see, we are actively working on many areas. So we hope to have all kind of news for you in the next report. Meanwhile, we hope you got enough to keep you interested. Keep having a lot of fun!