openSUSE 42.3 is out! Do you need some reading material while you wait for the download of the new release to finish? Don’t worry, we have the solution right here – another YaST team report.

Several products in one installation medium

Obviously, we stopped adding new features to SLE12-SP3 and Leap 42.3 some days ago, because everything needed to be tested properly before the release. So now we are mainly looking into the future. And one of the plans for that future regarding SUSE Linux Enterprise (SLE) is offering several products packed in a single installation medium.

SUSE offers several mission-specific products based on SLE and, so far, every product needs to be installed from its own medium (usually a DVD or a virtual image). So if you use SLE Server, SLE Desktop and SLE Server for SAP, you have to have three DVDs which is a bit cumbersome.

After some discussions about the technical implementation details, we created a first prototype of the installer with an extra dialog that allows to select one of the detected products and continues the installation from there according to the installation workflow of the chosen product. It is still a proof of concept, but we can at least share screenshots showing how it looks for the time being. 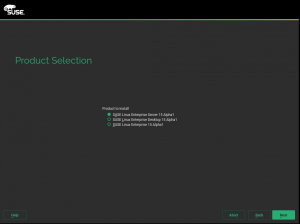 So far, there are no plans to use the new feature in openSUSE, mainly because the project does not deliver separate mission-specific products in the same way than SUSE does with SUSE Linux Enterprise.

In the Sprint 36 report we presented the rewrite of the YaST Partitioner and we have been informing about its evolution in subsequent reports. We told you back then that we decided to split it in a separate yast2-partitioner package. But time has proved that decision to have too many drawbacks so we decided to bring the Partitioner back home, to yast2-storage-ng. As part of the process, we got rid of an old previous prototype of the Partitioner that was still lying in the yast2-storage-ng repository and some code that was there just to support that old prototype.

You may be asking why is all that relevant. It is because that means the repository (and thus the package) is finally approaching the final structure it will have when released into Tumbleweed. And that implies that all the systems we use to automatically measure the quality and reliability of our repositories are now providing trustworthy results… as trustworthy as automatic quality evaluations can be.

And according to those tools:

If you wonder about the numbers for the old codebase we want to replace, its code quality is 0.94 and only a 31% of it is covered by unit tests. A perfect example of legacy code.

As reported in previous posts, the new storage stack can already process AutoYaST profiles including partitions, LVM and MD arrays, but some details are still missing. The first of those details we wanted to address was the definition and creation of subvolumes in a Btrfs file-system.

Now it works according to the official documentation – both syntaxes for the <subvolumes> section are supported, it never creates subvolumes that would be shadowed by any other mounted file-system and it uses the list in control.xml as fallback for the root partition if Btrfs is used but subvolumes are not specified.

All that, as usual in the re-implemented stack, with fully tested and documented code. 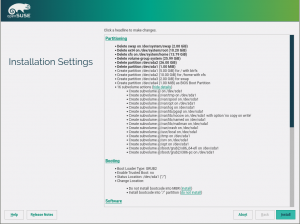 In the previous report we showed you how the support for Multipath I/O looked at the library level, which usually means just geeky graphs. During this sprint, we have taught the installer to use that new library feature, so we now have real screenshots to show!

During the installation, now multipath hardware is detected and the user is asked for activation. 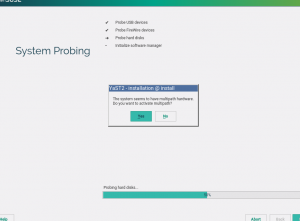 If the user agrees, the installer will never use the individual disk devices to propose a partitioning layout and it will not offer them as an option during the guided setup. The installer always works on the final (compound) multipath device, proposing the correct names for the partitions and so on (which, being a devicemapper device, follows a
different pattern when compared to raw devices). 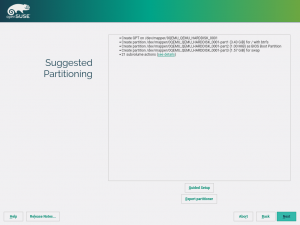 The resulting system is still not fully bootable because yast2-bootloader has still not been adapted to this scenario. Very likely, something for the upcoming sprint, so stay tuned.

The world changes every day and we are always adapting YaST to remain shiny. The 2.4 version of Ruby is about to land in openSUSE Tumbleweed and is expected to be the default Ruby for SUSE Linux Enterprise 15 and openSUSE Leap 15. We found that some of the YaST packages were not fully ready for this new Ruby, so it was time for some tweaking.

After dealing with quite some details too technical and boring for this blog (but feel free to ask if you want the gory bits), YaST is shining again in Factory, which means we are no longer blocking the adoption of Ruby 2.4 in Tumbleweed.

As our team keeps always developing new features, solving bugs, and receiving feedback, we always evaluate our priorities and product. Sometimes, during this evaluation, we see that some YaST modules do not bring enough value or do not shine enough as part of our standard package.

After some evaluation, we come to announce that the modules Add-on Creator and Product Creator will no longer be part of YaST. These packages use Kiwi as backend and we have high competition on UI sides – SUSE Studio and Open Build Service. So it no longer makes sense to have these packages and we recommend for users of these modules to use one of the alternatives or Kiwi directly if you already have an XML definition file for Kiwi.

As Service Request Numbers can be now composed of 11 or 12 digits, instead of only 11 digits as before, we had to adapt YaST to handle this change. YaST module Support can now accept 11 or 12 digit service request numbers. We implemented such a change for all products dating back from SLE 10 SP3 until the most recent SUSE Linux versions. Updates with this change will be soon released.

Network Setup in the 1st Stage of Autoinstallation

The YaST installation used to have two stages, separated by a reboot. Starting with SLE 12 and openSUSE Leap 42.1 we have eliminated the
second stage. But it was still needed for AutoYaST, controlled by the setting

We have fixed those parts of the networking setup and now you can explicitly set AutoYaST to not use a second stage anymore.

An issue that we have found out is that GDM has problems with the system when different users have the same UIDs. If it happens, GDM does not start properly. As a solution, we decided that either UIDs will be defined in the AutoYaST configuration file for ALL users or this tag will not be used at all for ALL users since a mix of both can result into duplicate UIDs.

And we just keep YaSTing!

We hope you liked our report as much as we loved to build all of that. We’ll continue YaSTing so we can reach you again in two weeks with much more cool stuff to show.

By now, enjoy your openSUSE 42.3 and all the cool features that came with it!