Can you perform an online offline migration? Will you understand the license better if you display a different translation? Is your /home mounted or haunted? Welcome back to our linguistic blog disguised as a YaST team sprint report.

Welcome back to our linguistic blog disguised as a YaST team sprint report.

The last few weeks we spent quite some time implementing the offline migration from the old SUSE Linux Enterprise products (versions 11 and 12) to the upcoming version 15.

Note: the offline migration term actually means that your production system is not booted and running, it is not about the network status. At offline migration a different system is booted (usually from a DVD). See more details in the official SUSE documentation.

The migration from SLE 11 is a bit more complex as it is registered against the older Novell Customer Center and requires some additional changes in the installer. This is work in progress.

Made the addon Linuxrc Option Work Well with the Packages DVD

In SLE 15 there are numerous modules and extensions, such as the Live Patching module, or the Web Scripting module. On physical DVDs, we are putting all of them on a single Packages DVD.

When you are installing SLES and choose to add such a module during the installation from the DVD, you will be presented with a screen to select from all the modules found on the DVD.

You can also automate this step by passing the addon=dvd:/// option at the installation boot prompt. (See the Linuxrc reference). Formerly this worked only with single-product media. Starting now, the addon option will work also with multi-product media such as the Packages DVD.

Some months ago, YaST started to use libzypp to get product licenses, instead of using the old SUSE Tags approach. However, until this sprint, this feature was somehow incomplete.

On one hand, the complete list of supported languages was shown, no matter whether a translation was available for a given language or not. On the other hand, the "Licenses Translation" button was missing (it is still used in single product media). 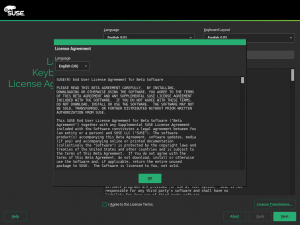 Now both problems are solved and, as soon as new translations are included in the installation media, they should be handled gracefully in the installer.

This sprint we finished our change from xinetd to systemd sockets for starting services on demand. To finalize it there is basically two main tasks.

The first one was dropping the YaST module for xinetd. That required a conversion of yast2-ftp-server that used this module and also adding a note to AutoYaST that xinetd configuration is no longer supported, so if you have it in your AutoYaST profile, it won’t be applied. The FTP server part was harder because, as mentioned in the last report, one of the two backends does not support systemd sockets, but we found that this backend is a bit ancient and support for us was quite painful. The result is that we dropped pure-ftp and kept only vsftpd backend, which makes the code much simplier and our life better (the final diff-stat is +1100/-3700). And then we converted the usage to systemd sockets. Then we could proceed to dropping yast2-inetd because there was no dependency anymore.

The second task was xinetd usage directly, with an API for starting on demand. It is not used too often and in the end the biggest parts were dropping xinetd usage for VNC based installation and yast2-inst-server which is now converted to use systemd sockets. And here we can give you a nice trick we discovered during the implementation: If a systemd service has a parameter (often the case with services started by a systemd socket) you can stop all of them with a wildcard, e.g. systemctl stop vnc@*.

So here is a happy end – after this sprint there is no xinetd usage and we can support only one tool for starting on demand, allowing us to focus on improving other parts.

In the previous blog entry we announced AutoYaST support for configuring firewalld but cloning the firewall configuration was not supported yet and also the AutoYaST summary concerning the Firewall module needed some love and that is basically what we have implemented during this sprint. 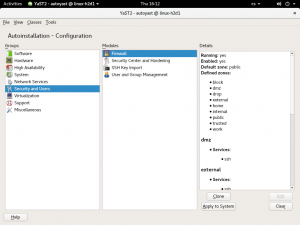 Added the Format Options Dialog to the Partitioner

One of the missing things in the new partitioner was the format options dialog letting you tune the file system a bit when it is created.

The options itself are more or less the same as in the old partitioner. This feature is intended more for the experts. As an average user you will rarely find a need to fine-tune file system parameters. But in case you do, the dialog is there to aid you (remember the help button).

Here is a screenshot of the ext4 options: 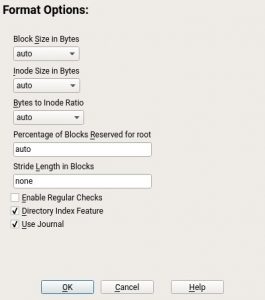 Removed the Empty Views in the Partitioner

In the process of rewriting the YaST storage stack, we also rewrote the partitioner. Some views in the partitioner were taken over from the old one, but not filled with any functionality so far – they only showed empty pages. We now removed those empty pages: 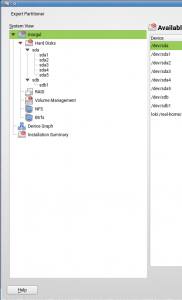 Compared to the previous version with the empty views: 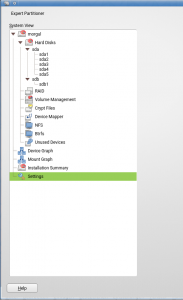 Installation Summary in the Partitioner

One of the sections that survived the Partitioner sifting mentioned above was the Installation Summary. During this sprint we re-implemented this useful view that shows the changes that would be performed in the system, including packages to install in order for the system to work with the chosen technologies. One image is worth a thousand words. 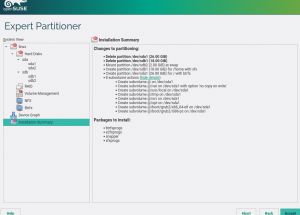 Of course, the information in both lists is updated with every change done in the Partitioner and, as usual, everything works as a charm also in text mode. Including the possibility of collapsing or extending the (usually lengthy) list of operations on subvolumes. 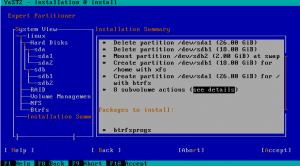 A few sprints ago we implemented warnings in the partitioner that inform you if something looks like probably not working, but with expert knowledge it can be made working. Now we add also blocking errors where we are sure it won’t work. It is just a first draft so it will be adapted as needed and as problems appear. Some checks are already moved from the bootloader to the partitioner, so you can fix the partitioning quickly. But enough words, check out the screenshots, where the first one is an error which prevents continuing and the second one is just a warning. 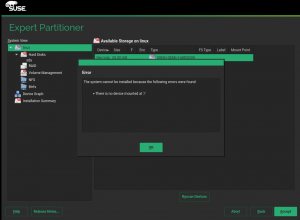 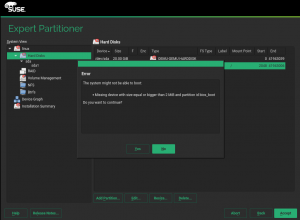 When defining a <drive> section in an AutoYaST profile, the <device> element should determine to which disk you want to apply that partitioning schema. Usually, it is a device kernel name, like /dev/sda, or a link which resolves to a disk (for instance, /dev/disk/by-id/*, /dev/disk/by-path, etc.).

However, AutoYaST supports specifying other names, like by-partlabel, by-label, etc. Those links won’t resolve directly to a disk, but the storage layer will be able to find out which disk they belong to.

Although SLE 12 supported this behaviour, it was missing from SLE 15 until this sprint.

Fine-tuning of the Requirements to Boot a System

In some situations, an extra partition or a given disk layout is needed to boot an (open)SUSE operating system. Like the separate /boot partition needed in some corner-case legacy scenarios, the ESP partition that must be mounted at /boot/efi in EFI systems or the PReP partition needed by some PowerPC systems. The partitioning proposal performed by the installer tries to ensure those booting requirements are met (so does AutoYaST in some cases) and our beloved Partitioner also includes some checks to warn you user if you forget to create or mount any of those partitions.

But in some situations, the installer was suggesting partitions with a suboptimal size or even partitions that were not strictly needed. On the other hand, the Partitioner was sometimes being too picky, warning about situations that were not such a big problem. So during this sprint we refined our list of booting requirements, updating the corresponding documentation, relaxing the partitioner checks and fine-tuning the proposal outcome. Specifically the PowerPC requirements were revamped based on the input from several experts and bug reports from manufacturers of some systems.

So no matter if you usually trust the installer proposal, if you like to handcraft stuff with the Partitioner or if you install using AutoYaST, the experience should be more smooth now, which fewer (if any) ugly surprises at boot time.

Mount Options Revisited: When the Old Demons Come back to Haunt You

Recently, we reintroduced per-filesystem-type defaults for mount options. We thought this would be a great chance to clean up old code that had become messy over time; we thought we could provide a clean, well-structured and easy-to-understand way to do this.

Then people began to test some more scenarios, and we found out the hard way that in some situations, those mount options depend on the mount point for various reasons: Some quirks of underlying kernel modules like the VFAT filesystem or the way systemd handles mounting the root filesystem during booting made this necessary.

So we had to bite the bullet and reintroduce some of that old code which was kind of messy; for example, for ext4 or ext3 root filesystems, we no longer specify any data=... mount options because this might make remounting the root filesystem read/write at boot time fail; in another case, a mkdir -p /boot/efi/EFI (when installing the boot loader) on a VFAT partition failed despite VFAT technically being case-insensitive (omitting iocharset=utf8 fixed this).

Lesson learned: Some messy old code is messy for a reason. Trying to streamline it may break some scenarios.

The answers to the initial questions are

As the SLE release cycle is shifting from the "all features are mandatory" phase to the "all bugs are top priority" phase, expect less of feature news and more bugfix news in the next report, due in two weeks.