We were in the middle of rewriting, refactoring recompiling all of YaST into Visual Basic when we found that it was April 2nd already and had to scratch the entire project. Next year for sure.

We were in the middle of rewriting, refactoring recompiling all of YaST into Visual Basic when we found that it was April 2nd already and had to scratch the entire project. Next year for sure. So you are left with a report of enterprise grade stabilization and we hope that your servers will be very bored running our software.

Life goes through various roads and it is same for SLE life. SLE15 is now split into multiple modules and during the upgrade it can be quite complex to pick the desired upgrade target. We have to react to this issue as customers start complaining that the upgrade overview starts to be hard to understand and we should improve it. So we did it and now you can check the changes on the attached screenshots. We modified the overview label from listing all products to just a summary with the details displayed below as it was before. Be aware that in the future and for some products or extensions/modules more migration targets will be possible. 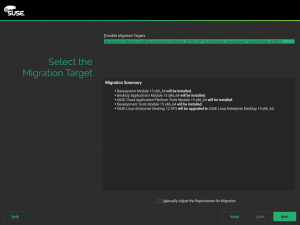 and the new one (for a slightly different system, so it is not an exact match for the previous screenshot): 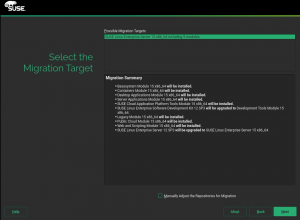 We are still improving and fixing bugs in the migration from the SLE11 or SLE12 products to the new SLE15 line. One issue we fixed this sprint was importing the SSL server certificate from the old system at upgrade.

For registration you can use a local SMT server (Subscription Management Tool) instead of the usual SCC server (SUSE Customer Center).

The certificate import is quite easy, we just need to be careful as SLE11 uses a different (old) path for storing the imported certificates than in SLE12 or SLE15.

Various products that we’re able to install have grown so many groups of presets, called System Roles, that they no longer fit on the screen. We applied some dark gray magic to make them fit in a scrollable box, at the expense of losing the keyboard shortcuts, sorry. 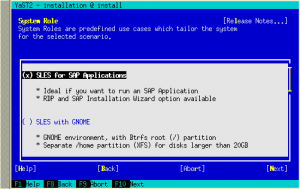 Better Message for Multipath (and other) Problems

While scanning the storage hardware, or at a later stage while manipulating it, there is always a chance of finding problems in the system that make it very hard to continue with the installation or the execution of YaST. In that case, previous versions of storage-ng used to show you a pop-up message with some technical details about what went wrong (for example, the command that failed and its output) and with options to abort YaST or continue despite the error.

But we found that for some situations we could do better in trying to understand what went wrong and explain it to you, instead of directly showing those raw technical details. One clear example is finding the same LVM physical volume twice, something that should never happen. Apart from double vision problems (libstorage-ng doesn’t drink alcohol), the most likely cause is that a multipath system is not being correctly detected and thus every one of the connections to the disk is being detected as a different disk, duplicating the content in the eyes of YaST. 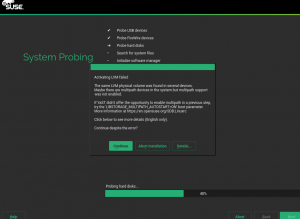 The technical details are still available under the "Details" button, as you can see below. They are simply not displayed at first sight, which should make the whole experience less daunting for less-experienced users. That change applies to all the severe errors found during the three critical phases of storage-ng: hardware activation, system probing, and commit (when the partitions and other devices are created). 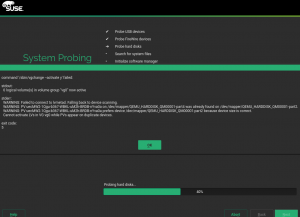 Of course, the new pop-up messages have full support for AutoYaST. The most appropriate default option (continue or abort) is automatically selected depending on which one of the mentioned phases is being executed and, if AutoYaST is configured to display pop-ups, the usual countdown is displayed before doing such selection. See below the new generic error (for a different, unidentified problem) in action in AutoYaST. 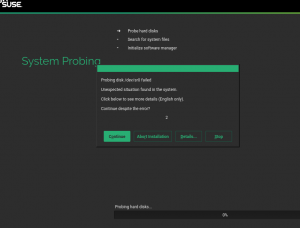 As you may know, AutoYaST is quite flexible when it comes to partitioning, so we are still writing the final bits of the adaptation with the new storage layer. And this time, we were working on teaching AutoYaST how to reuse encrypted devices properly.

However, the implementation was not that straightforward, as the hardware probing occurs even before the partitioning section of the profile has been analyzed. And, in some scenarios, it is not clear which key should be used to unlock a device (for instance, this can happen when more than one encryption key is defined). To solve this problem, AutoYaST will try all defined keys on all encrypted devices until a working key is found.

Of course, this behavior is properly documented now in the AutoYaST handbook.

In our previous blog entry we already mentioned that there are significant changes between SLE12 and SLE15 profiles which have been documented in this appendix.

It is very common to adapt the profiles by hand which is error-prone and sometimes it is also hard to identify where the errors are just running an installation and looking deeply into the logs. That is why profiles validation using xmllint or jing is recommended (more info here).

During this sprint we have fixed some errors with the cloned profiles after installation which were not validating.

We are receiving quite a lot of bugs regarding the translations. The usual problem is that some text is not translated at all and the original English text is displayed. This sprint we fixed several issues in this area, two of them are worth sharing in the blog.

The first problem was reported for missing translations in the role descriptions in the SLES4SAP product. The SLES4SAP installation basically behaves like the standard SLES installation just with changed few defaults. To avoid the duplication and make the SLES4SAP maintenance easier we simply take the original SLES XML control file, which describes the installer behavior and the defaults, and change just few values using a XSL transformation into the resulting SLES4SAP installer control file.

It turned out that the roles with missing translations were located in that XSL file. And unfortunately YaST did not support extracting the translatable strings from XSL files. However, we support translations in XML files and because a XSL file is actually a valid XML file we could easily extend the translation support in YaST to also cover the XSL files. So now the SLES4SAP roles are correctly translated.

We fixed several bugs with missing translations which were caused by missing textdomain call in the code. This call defines which POT file should be loaded and searched for the translations. If the YaST code does not use this call then obviously no text can be translated as YaST does not know which POT file should be used and it silently used the original untranslated text.

That means it was quite difficult to find why some text was not translated. And because that was quite common bug we had a nice idea to improve the situation by logging a warning into the YaST log with the exact message which could not be translated. And more importantly the log now also contains the location of the code which was trying to use the translation wrongly. See the pull request for more details.

With the openQA team we discussed also the possibility to add a new check to openQA which would scan the YaST log for this particular warning and report a problem. Which means we should not overlook this quite important warning in the future.