Getting further with Btrfs in YaST

Since the YaST team rewrote the software stack for managing the storage devices, we have been adding and presenting new capabilities in that area regularly. That includes, among other features, the unpaired ability to format and partition all kind of devices and the possibility of creating and managing Bcache devices.

Since the YaST team rewrote the software stack for managing the storage devices, we have been adding and presenting new capabilities in that area regularly. That includes, among other features, the unpaired ability to format and partition all kind of devices and the possibility of creating and managing Bcache devices. Time has come to present another largely awaited feature that is just landing in openSUSE Tumbleweed: support for multi-device Btrfs file systems.

As our usual readers surely know, Btrfs is a modern file system for Linux aimed at implementing advanced features that go beyond the scope and capabilities of traditional file systems. Such capabilities include subvolumes (separate internal file system roots), writable and read-only snapshots, efficient incremental backup and our today’s special: support for distributing a single file system over multiple block devices.

Multi-device Btrfs at a glance

Ok, you got it. YaST now supports multi-device Btrfs file system… but, what that exactly means? Well, as simple as it sounds, it’s possible to create a Btrfs file system over several disks, partitions or any other block devices. Pretty much like a software-defined RAID. In fact, you can use it to completely replace software RAIDs.

Let’s see an example. Imagine you have two disks, /dev/sda and /dev/sdb, and you also have some partitions on the first disk. You can create a Btrfs file system over some devices at the same time, e.g., over /dev/sda2 and /dev/sdb, so you will have a configuration that looks like this.

Once you have the file system over several devices, you can configure it to do data striping, mirroring, striping + mirroring, etc. Basically everything that RAID can do. In fact, you can configure how to treat the data and the Btrfs meta-data separately. For example, you could decide to do striping with your data (by setting the data RAID level to the raid0 value) and to do mirroring with the Btrfs meta-data (setting it as raid1 level). For both, data and meta-data, you can use the following levels: single, dup, raid0, raid1, raid10, raid5 and raid6.

The combination of this feature and Btrfs subvolumes opens an almost endless world of possibilities. It basically allows you to manage your whole storage configuration from the file system itself. Usage of separate tools and layers like software-defined RAID or LVM are simply dispensable when using Btrfs in all its glory.

Interesting feature indeed, but where to start? As usual, YaST brings you the answer! Let’s see how the YaST version that is currently being integrated in openSUSE Tumbleweed will ease the management of this cool Btrfs feature. SLE and Leap users will have to wait to the next release (15.2) to enjoy all the bells and whistles.

First of all, the Btrfs section of our beloved Expert Partitioner has been revamped as shown in the following picture. 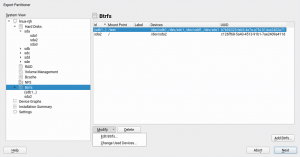 It lists all the Btrfs file systems, single- and multi-device ones. You can distinguish them at first sight by the format of the name. The table contains the most relevant information about the file systems, alongside buttons to add a new file system and to delete and modify the existing ones. 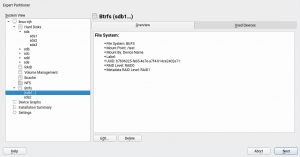 In addition, the tab called “Used Devices” contains a detailed list of the block devices being used by the file system. That list can also be modified to add or remove devices. Note such operation can only be done when the file system does not exist on disk yet. Theoretically, Btrfs allows to add and remove devices from an already created file system, but a balancing operation would be needed after that. Such balancing operation could take quite a considerable amount of time. For that reason it has been avoided in the Expert Partitioner. 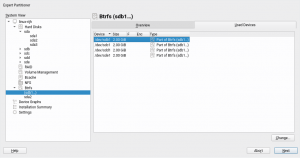 Of course, you can still format a single device as Btrfs in the traditional way (using the “edit” button for such device). But let’s see how the new button for adding a Btrfs file system opens new possibilities. 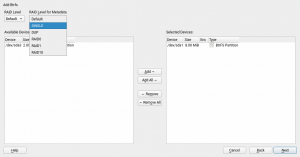 Similar to the RAID dialog, you have the available devices on the left and you can select the devices where you want to create the file system, and also you can indicate the data and meta-data RAID levels. Of course, the admissible RAID levels will depend on the number of selected devices. You will go to the second step of the Btrfs creation by clicking the “Next” button. In this second step, you can select the mount options and define the subvolumes, see the next image. 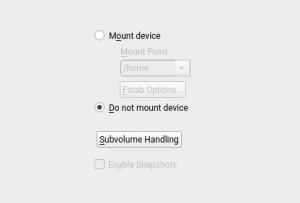 And apart of all that, the Expert Partitioner has received several small improvements after including multi-device Btrfs file systems. Now that the multi-device Btrfs file systems are considered first class citizens, they are included in the general list of devices. Note the “Type” column has also been improved to show more useful information, not only for Btrfs but for all kind of devices. 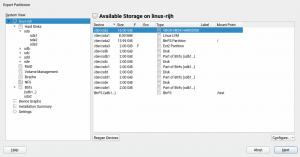 But YaST goes far beyond the Partitioner. We have also ensured the storage proposal (i.e. the Guided Setup) can deal with existing multi-device Btrfs configurations when you are performing a new installation. Moreover, the upgrade process is also ready to work with your multi-device Btrfs file system.

Last but not least, AutoYaST can now also be used to specify that kind of Btrfs setups. The official AutoYaST documentation will include a specific section about advanced management of Btrfs file systems on top of several block devices. The content is being reviewed by the SUSE documentation team right now.

What does not work (yet)?

There is still one scenario that is not 100% covered. As described in bug#1137997, is still not possible to use the “Import Mount Points” button in the Partitioner to recreate a multi-device Btrfs layout. But fear not, it’s in our list of things to fix in the short term!

Get it while it’s hot

Free Software development is a collaborative process and now we need YOU to do your part. Please test this new feature and report bugs if something does not work as you expected. And please, come with your ideas and further improvements and use cases. And, of course, don’t forget to have a lot of fun!