As the first prototype of ALP approaches, the YaST-related work groups keep working on several aspects

Time for more news from the YaST-related ALP work groups. As the first prototype of our Adaptable Linux Platform approaches we keep working on several aspects like:

It’s a quite diverse set of things, so let’s take it bit by bit.

Cockpit on ALP - the Book

Cockpit has been selected as the default tool to perform 1:1 administration of ALP systems. Easing the adoption of Cockpit on ALP is, therefore, one of the main goals of the 1:1 System Management Work Group. Since clear documentation is key, we created this wiki page explaining how to setup and start using Cockpit on ALP.

The document includes several so-called “development notes” presenting aspects we want to work on in order to improve the user experience and make the process even more straightforward. So stay tuned for more news in that regard.

As you already know, Cockpit will not be the only way to administer an individual ALP system. Our containerized version of YaST will also be an option for those looking for a more traditional (open)SUSE approach. So we took some actions to improve the behavior of YaST on ALP.

First of all, we reduced the size of the container images as shown in the following table.

We detected more opportunities to reduce the size of the container images, but in most cases they would imply relatively deep changes in the YaST code or a reorganization of how we distribute the YaST components into several images. So we decided to postpone those changes a bit to focus on other aspects in the short term.

We also adapted the Bootloader and Kdump YaST modules to work containerized and we added them to the available container images.

We took the opportunity to rework a bit how YaST handles the on-demand installation of software. As you know, YaST sometimes asks to install a given set of packages in order to continue working or to configure some particular settings. 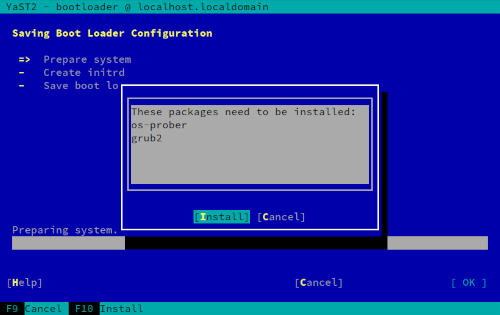 Due to some race conditions when initializing the software management stack, YaST was sometimes checking and even installing the packages in the container instead of doing it so in the host system that was being configured. That is fixed now and it works as expected in any system in which immediate installation of packages is possible, no matter if YaST runs natively or in a container. But that still leaves one open question. What to do in a transactional system in which installing new software implies a reboot of the system? We still don’t have an answer to that but we are open to suggestions.

As you can imagine, we also invested quite some time checking the behavior of YaST containerized on top of ALP. The good news is that, apart from the already mentioned challenge with software installation, we found no big differences between running in a default (transactional) ALP system or in a non-transaction version of it. The not-so-good news is that we found some issues related to rendering of the ncurses interfaces, to sysctl configuration and to some other aspects. Most of them look like relative easy to fix and we plan to work on that in the upcoming weeks.

Working on Cockpit and our containerized YaST is not preventing us to keep evolving D-Installer. If you have tested our next-generation installer you may have noticed it does not include an option to configure the network. We invested some time lately researching the topic and designing how network configuration should work in D-Installer from the architectural point of view and also regarding the user experience.

In the short term, we have decided to cover the two simplest use cases: regular cable and WiFi adapters. Bear in mind that Cockpit does not allow setting up WiFi adapters yet. We agreed to directly use the D-Bus interface provided by NetworkManager. At this point, there is no need to add our own network service. At the end of the installation, we will just copy the configuration from the system executing D-Installer to the new system.

The implementation will not be based on the existing Cockpit components for network configuration since they present several weaknesses we would like to avoid. Instead, we will reuse the components of the cockpit-wicked extension, whose architecture is better suited for the task.

D-Installer as a Set of Containers

In our previous report we announced D-Installer 0.4 as the first version with a modular architecture. So, apart from the already existing separation between the back-end and the two existing user interfaces (web UI and command-line), the back-end consists now on several interconnected components.

And we also presented Iguana, a minimal boot image capable of running containers.

Sure you already guessed then what the next logical step was going to be. Exactly, D-Installer running as a set of containers! We implemented three proofs of concept to check what was possible and to research implications like memory consumption:

It’s worth mentioning that containers communicate with each other by means of D-Bus, using different techniques on each case. The best news if that all solutions seem to work flawlessly and are able to perform a complete installation.

And what about memory consumption? Well, it’s clearly bigger than traditional SLE installation with YaST, but that’s expected at this point in which no optimizations has been performed on D-Installer or the containers. On the other hand, we found no significant differences between the three mentioned proofs of concept.

Those numbers were measured using podman stats while executing D-Installer in a traditional openSUSE system. We will have more accurate numbers as soon as we are able to run the three proofs of concepts on top of Iguana. Which take us to…

Documentation About Testing D-Installer with Iguana

So far, Iguana can only execute a single container. Which means it already works with the all-in-one D-Installer container but cannot be used yet to test the other approaches. We are currently developing a mechanism to orchestrate several containers inspired by the one offered by GitHub Actions.

Meanwhile, we added some basic documentation to the project, including how to use it to test D-Installer.

Despite the reduced presence on this blog post, we also keep working on YaST beside containerization. Not only fixing bugs but also implementing new features and tools like our new experimental helper to inspect YaST logs. So stay tuned to get more updates about Cockpit, ALP, D-Installer, Iguana and, of course, YaST!