Another development report from the YaST Team covering YaST, Cockpit, ALP and everything in between

Time for another development report from the YaST Team including, as usual, much more than only YaST. This time we will cover:

Let’s take it bit by bit.

Over the last year or so, we got some reports about the graphical interface of YaST presenting rendering issues, specially on HiDPI displays and on openQA. The reporters provided screenshots that showed how some widgets were apparently drawn on top of the previous ones without an intermediate cleanup, so the screen ended up displaying a mixture of old and new widgets that were very hard to read.

We were unable to reproduce the problem and we tried to involve people from different areas (like graphic drivers maintainers, virtualization experts or X11 developers) to track the problem down with no luck… until now! We finally found where the bug was hiding and hunted it down.

See the pull request that fixes the issue if you are interested in a technical description including faulty HiDPI detection, unexpected Qt behavior and QSS style sheets oddities. It also includes a screenshot of the described (and now fixed) problem.

And talking about YaST and known problems, you may remember from our previous post that we identified one very visible issue with the on-demand installation of software when using YaST (containerized or not) in a transactional system like the future ALP. Such systems prevent the installation of new packages during run-time, so an extra reboot is always needed before using the new software.

We explored several options to make YaST work as smooth as possible in transactional systems, like performing all the modifications, including packages installation and configuration changes, in a single transaction with a final reboot at the end of the process. But we found it too risky since it implies working on temporary system snapshots that are not a fully accurate representation of how the managed system will look after the reboot.

Finally we implemented the solution that is shown in the screenshot below. For the time being, if YaST detects it’s running in a transactional system so it cannot install the missing packages and continue, then it will simply ask the user to install the packages and reboot. 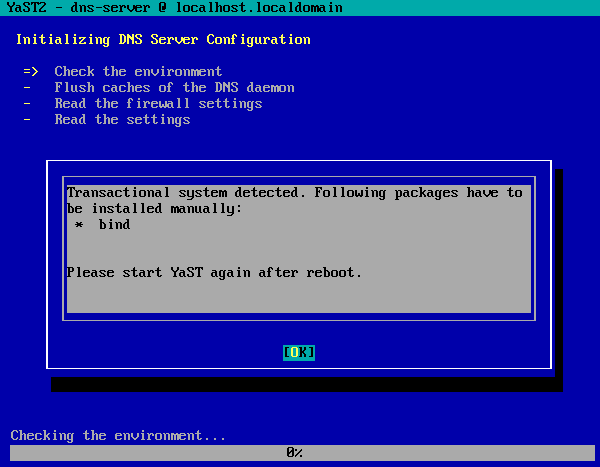 With that, YaST does not longer look broken on transactional systems (unsuccessfully trying to install packages when it doesn’t make sense) but the adopted solution is just a first approach that we will likely improve in the future.

The described challenge with package management and transactional systems is not exclusive of YaST. We actually have a similar problem with Cockpit and its metrics functionality. So we decided we needed to gather some opinions to find the most adequate and consistent solution for ALP and other transactional systems.

As starting point, we wrote this document describing the situation and presenting some open questions. The feedback gathered so far from members of the ALP Steering Committee suggests we should improve YaST to go further into assisting the user in the process of installing the packages and rebooting the transactional system. The same applies to Cockpit, but that may be more problematic since it’s not aligned with the current vision expressed by the Cockpit developers in that regard.

We are always open to receive more comments and opinions. If you have any, you know how to reach us. ;-)

And talking about the metrics functionality of Cockpit, we also took the opportunity to polish its behavior on ALP. And we did it by fixing nothing ourselves. :-) We just diagnosed the problems and reported what was wrong in the pcp package and in Cockpit. Both issues are fixed now by their corresponding maintainers and future ALP pre-releases will offer a more pleasant Cockpit experience out-of-the-box.

We keep working on YaST, especially on the installer security policies described on our previous report, on improving the Cockpit and the YaST user experiences with ALP and on several other topics we will report in the following weeks, as soon as we have tangible results to show.

Meanwhile we encourage you to get involved in openSUSE development and promotion and to stay tuned for more news. Have a lot of fun!