Almost one month after our latest update, here it comes a bunch of news from the YaST Team trenches. And, as usual, we fire in many directions including:

So let’s go into the details.

Some months ago we presented our proof of concept for a future Linux installer codenamed D-Installer. Since then, we have scattered news about it on our blog posts. Now we decided it’s the right time to invest a bit more in the project in order to move it forward.

As a first step, we improved the README file that serves as landing page for the project. Now it includes more information about the motivation and general structure of the project, as well as some screenshots of the web interface.

We also designed the D-Bus and web interfaces for defining the storage setup. That is, the set of partitions, LVM logical volumes and related data structures that should be created to install the system on. We published a document describing how it could work and we are already implementing that behavior. So if you have questions or suggestions, please speak up the sooner the better.

We are also making good progress in the configuration of the network, but since the feature is not complete yet we will save those news for upcoming blog posts. ;-)

On a more technical level, we introduced type checking in the JavaScript part of D-Installer by relying on TypeScript support for JSDoc annotations. If you don’t care about software internals, the previous sentence is just gibberish you can happily ignore. But if you are a JavaScript developer working on a project that is growing a bit too much, you may be interested in checking our approach in order to take advantage of the most important feature of TypeScript without actually changing the implementation language of the project.

Security Policies in the YaST Installer

Although we envision D-Installer as the future of (open)SUSE installation, we never forget YaST is still the present and will remain so for some years. Therefore we keep enhancing it and adapting it to new use cases. Lately we invested some time polishing the feature about security policies we originally presented some posts ago, based on the feedback we keep receiving about it.

As you can see in the screenshot below, now the initial scan performed in the first boot after installation is configurable and can even be skipped in order to be run manually afterwards. Additionally we changed the way the failing rules are presented and the way to acknowledge the situation in order to continue with the installation anyway. Moreover we extended the help texts to better explain the rationale and implications of each option. 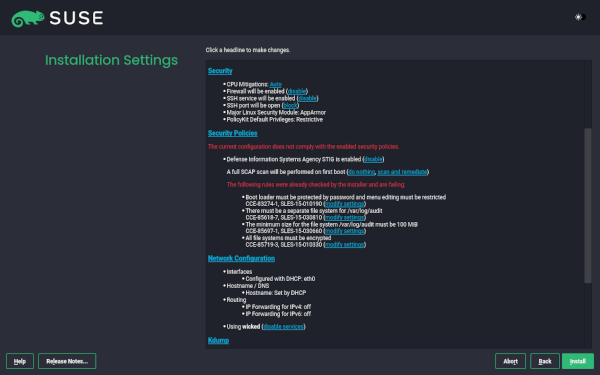 You can check up-to-date information about the feature and several current screenshots (bear in mind they are collapsed by default) at this pull request.

The containerized version of YaST includes several modules that are known to work correctly when executed from a container. But “correctly” does not always imply “optimally”. For example, the module for configuring iSCSI clients required some iSCSI tools to be installed both in the system to be managed (as expected) and in the container itself. That impacted the size of the YaST container, even for those who were not interested in executing yast2-iscsi-client. Moreover, while investigating that circumstance, we found the dependencies of the package were not aligned with YaST best practices. All that is fixed now and we have a more maintainable and standardized YaST iSCSI Client and a smaller YaST container.

Helping to Fix Problems with Cockpit and Podman Checkpoints

Talking about system management tools, you already know our team is lately looking beyond YaST and trying to help with the maintenance and integration of Cockpit. As a consequence of that continuous effort, we realized the functionality for creating checkpoints for Podman containers was not working as expected neither in openSUSE Tumbleweed nor in the ALP prototypes due to some problem in the package criu. Fortunately we are surrounded by people smarter than us, so we contacted Takashi Iwai and helped him to diagnose the problem. As a result, criu and Podman checkpoints are now working again in both Tumbleweed and the ALP prototypes. But don’t ask us for technical details, it’s all Takashi’s merit.

We keep working in all the areas related to system installation and configuration, so we hope to be back soon with more news about D-Installer, Cockpit and, of course, YaST. Meanwhile do as chameleons do and have a lot of fun!