Here we go again! Only one week after our previous report!

Here we go again! Only one week after our previous report, we already have a new bunch of (hopefully) exciting news. Let’s take a look to the outcome of our 34th Scrum sprint.

In the report of our 19th sprint, we already presented the new (at that point in time) and shiny Trusted Boot support in YaST2 Bootloader. So far, the only supported scenario was legacy boot (i.e. no UEFI) on x86_64 systems. Now, thanks to TPM2, is also possible use Trusted Boot with EFI, so we added support for it in our beloved bootloader module.

So now YaST Bootloader looks the same in non-EFI and EFI variants, no matter which underlying technology is actually used. Of course, YaST is only the tip of the iceberg, booting in Trusted Boot with EFI is possible thanks to all the tools that has recently added support for TPM2. openSUSE developers and packagers rock!

Configuring the NTP service in CaaSP

For a CaaSP cluster to work properly, it’s vitally important that all nodes have their clocks in sync. So, from now on, the installer is able to configure each node in a proper way and the administration node will act as NTP server for the worker nodes.

To achieve that, the user will be asked to specify one or several NTP servers to be used as time source during administration node installation and YaST will take care of the rest (updating the configuration and enabling the service).

If a NTP service is announced through SLP, YaST will propose automatically. 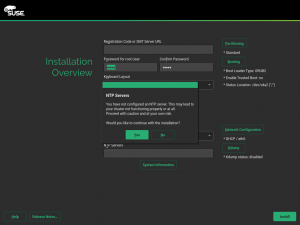 For worker nodes, YaST will configure the system to keep it synchronized with the administration role.

Through the previous reports, you have been able to follow the evolution of the renovated guided setup for the partitioning proposal. This sprint is not different, we have improved and adjusted that new wizard even further, making it smarter and more usable.

The new version is able to decide which steps to show depending on the current scenario. For example, in systems with only one disk the whole disk selection dialog will be skipped. The steps are also simplified by disabling widgets that are not applicable to the current situation. For example, if there is no previous Linux installation, the question about what to do with the existing Linux partitions will be disabled.

And talking about the actions to perform on preexisting partitions, that has also been improved. In the first guided setup version, these options were only displaying for illustrative purposes, but now they are 100% real and the proposal will honor their values, so the user can easily select what to do with previous Windows or Linux partitions. We even added a third option for other kind of partitions. 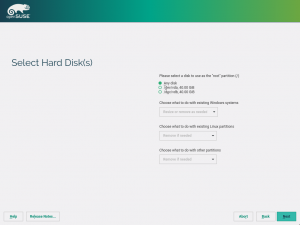 Last but not least (regarding the guided setup), the password selection for encryption is now more usable, allowing the user to choose a not so strong password if really desired. 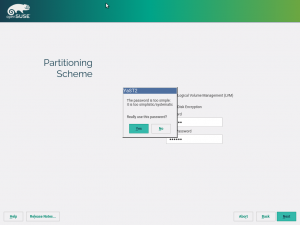 YaST is a complex and large piece software. It means that time to time some pieces that used to be great and shiny become obsolete and end up being useless. The cycle of life.

Some time ago, it was decided it was time for insserv to enjoy retirement and it was replaced by a stub. But there were still calls to insserv in YaST and we decided to remove them all. There were several reasons for that decision. Basicaly (open)SUSE has used systemd for couple of years already, so revisiting places where the YaST code depended on SySV was a must. As a side effect it shortened the list of YaST dependencies and, in the end, it is another small step towards smaller installation.

So good bye insserv, it was a pleasure to work with you.

Improvements in the ZFCP Controller Configuration for zKVM on S/390

When running the installer on a mainframe in a zKVM virtual machine it displays a warning about not detected ZFCP controllers: 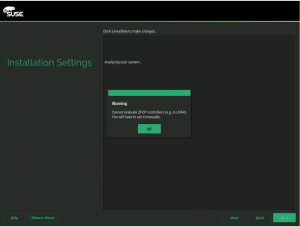 However, when running in a zKVM virtual machine the disk is accessible via the virtio driver, not through an emulated ZFCP controller. The warning is pointless and confusing.

The fix was basically just an one-liner which skips the warning when the zKVM virtualization is detected, but the YaST module for ZFCP doesn’t usually receive too much maintenance, so we applied our boy scout rule and improved the code a bit.

The improvements include using Rubocop for clean and unified coding style, enabling code coverage to know how much the code is tested (in this case it turned out to be horribly low, just about 4%), removing unused files, etc… You can find the details in the pull request.

Storage reimplementation: improvements all around

As we reported in our report about Hack Week 15, we have been working on an alternative way to offer the power of the new storage library to the Ruby world. The new API is finally ready for prime-time and used in all the Ruby code.

We took the opportunity to greatly improve the developer documentation and to revamp the yast2-storage-ng README and status page.

We also did some extra checks and added automated testing to ensure our partitioning proposal ensure the requisites if a S/390 system using ZFCP, so mainframe users also have a peaceful transition to the new storage stack.

We also greatly improved the ability of the new library to work with alternative name schemes for the devices. Up to now, only using plain kernel device name (e.g. /dev/sda1) was fully supported. Now we can do all the operations (specially generating the /etc/fstab file) by device name, by UUID, by filesystem label, by device id and by device path.

As you already know, at least we repeat it quite often,

YaST was converted from YCP to Ruby some time ago. However, this conversion was done on language basis. Some old design decisions and principles stayed, like the usage of SCR for accessing the underlying system.

Some time ago we introduced CFA (Config Files Api Gem) as a more powerful and flexible Ruby-powered replacement for SCR. Although we have been using it for a while in several YaST modules, we felt the concepts and rationales behind its operation where not that clear.

So we have invested some time improving the documentation and writing a blog post to properly present and explain CFA to the world. We will publish it next week, so stay tuned!

The next sprint will be the first in which the whole YaST team will work together integrating the new storage stack in every single part of YaST. So we hope the next report to be full of good news about the expert partitioner, improvements in AutoYaST’s handling of disks and so on.

Of course, that would be only a small fraction of all the stuff we plan to work on. See you in three weeks with more news!