We all know that everything slows down in summertime and software development is not an exception. But heat is not enough to stop the YaST team from turning the Scrum wheel and delivering the corresponding sprint reports. Let’s take a look to what we have been doing the last two weeks.

The storage reimplementation gets on the launchpad

As already anticipated in the previous report, one of the goals of this sprint was to merge the new storage stack into the codebase of SUSE Linux Enterprise 15 and openSUSE Leap 15. That implies submitting everything to Factory first and making sure the result looks harmless and good enough there. Thanks to the awesome openSUSE tools and processes, that kind of experiments can be isolated in a dedicated staging project allowing us to reach useful conclusions without risking the stability and features of Tumbleweed.

So we submitted two new source packages libstorage-ng and yast2-storage-ng to Factory, together with new versions of all the affected packages (already adapted to use the new system, instead of the old yast2-storage) and a modified version of the list of packages to be used during installation.

Everything was mixed and cooked in the Staging:E project and… guess what! We got brand new Factory ISOs with storage-ng, successfully building and verified to work by openQA, as you can see in this screenshot of the Staging Dashboard. 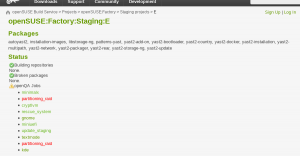 Yes, we know there are two failing tests in that dashboard, but that was fully expected since those tests use the expert partitioner to configure an installation of openSUSE on top of a MD RAID system and the reimplemented partitioner still lacks some controls to configure MD RAID arrays.

The new stack will live in Factory:Staging:E (or any other staging project the Tumbleweed crew decides) for quite some time, until it’s feature-pair with the old storage layer and, thus, can progress further in its travel to Tumbleweed. But Factory was just the first stop, the ultimate goal of this sprint was getting into the preliminary versions of the next SLE and openSUSE Leap.

That second integration is taking a little bit longer because it has coincided on time with other important changes in the installer and the base system… and the fact that August is the typical European vacation period is not exactly helping to iron all the details out. But since the new storage system works for Factory, we are certain it will do it for SUSE Linux and Leap.

As readers familiar with the Tumbleweed development process may have noticed already, having all those packages in Staging:E implies that newer versions of them will only reach Tumbleweed all at once, when yast2-storage-ng is considered mature enough for that. Somehow, that will block us from delivering new features for the packages you see in the list in the mentioned image of the dashboard. But don’t worry, if something serious happens and a critical update is needed we will not let our beloved Tumbleweed users down.

But there is much more happening in YaSTland beyond the storage reimplementation. Let’s take a look to the improvements in other areas.

Sometimes, users have already Linux installed in their system and they do not want to install Grub in MBR again with a new Linux distribution since the installed Linux can manage the bootloader. For this case, the user may decide to not install grub packages at all in the system. However, until now the user was obligated to install this package otherwise an error message would appear, as the image below shows. 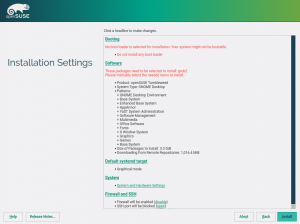 For some specific scenarios, as you may find here, even other packages are required, and when the user decided for not installing the bootloader, these packages were still required for the installation.

We changed this behavior in Tumbleweed and SLE 15, and now the users will be able to install the system without the packages that are not required, in case they decide to manage bootloader through another operational system.

But that’s not the only improvement introduced in the bootloader management during this sprint.

Improve how YaST finds disk to install Grub in MBR

In Leap 42.3 and SLE 12.3, we found out that, in some very specific cases (check the bug report for more details), YaST was not finding the correct disk to install Grub in MBR. When it happened, an error message appeared at the end of the installation, showing that Grub could not be installed in /dev/btrfs disk. 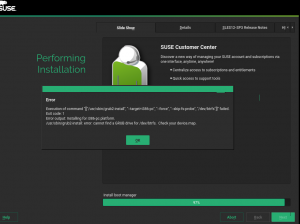 We improved our approach to finding the correct MBR device, by adding a specific search for the disk where the partition /boot or / (in case /boot does not exist) is located.

Such a change will be released as maintenance update and self-update, and it affects only Leap 42.3 and SLE 12.3, since SLE 15 will use the new storage layer, which does not need this double check for the correct disk.

And talking about the new storage system…

The support of new installations with ReiserFS was removed from YaST in SUSE Linux Enterprise 12 and openSUSE Leap 42 but upgrades were still supported.

With SUSE Linux Enterprise 15 and Leap 15 the support of ReiserFS will be completely removed from YaST and the installer will block the upgrade of systems formatted with ReiserFS.

If some of the entries in the /etc/fstab file of the system to be upgraded is using ReiserFS, the installer will suggest to convert them to another filesystem type before migrating the system to SUSE Linux Enterprise 15 or openSUSE Leap 15. 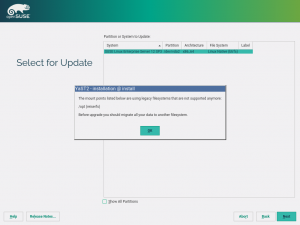 A similar blocking error will be reported for ReiserFS root partitions. 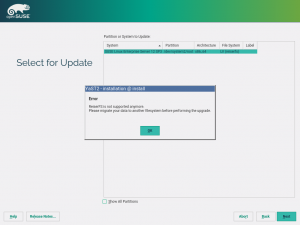 This may be interesting for Ruby developers in general. We got a bug report about crashing YaST which in the end turned out to be caused by upgrade to Ruby 2.4. The tricky part was that YaST crashed randomly and it was difficult to reproduce the problem.

It turned out that the crash happened when Ruby wanted to print a warning on the error output, which in some situations failed. We did not fix the race condition, as it likely would be too difficult to debug the Ruby internals, but we at least fixed the code to not produce the warnings anymore.

So if you are a Ruby developer take this free advise from your YaST fellows – if your code crashes randomly with Ruby 2.4 then check for the Ruby warnings first.

A heads-up about network devices names

Two sprints ago we told you about the new possibility of configuring the network with AutoYaST already in the first stage, avoiding an extra restart of the system in most cases.

During this sprint we spent some time trying to test old AutoYaST profiles (with complex network configurations) with the upcoming version of SUSE Linux Enterprise Server, using our suite of automatic AutoYaST Integration Tests. But we found some issues caused by the current architecture of our test suite that may be of interest for some of our readers.

Tumbleweed has been using ‘predictable network interface names’ for some time now and it fits most regular use cases. Inspired or following the scheme idea introduced by ‘biosdevname’, Predictable Network Interface Names was adopted in systemd/udev v197 trying to solve an historical problem with the non deterministic classic naming scheme for network interfaces (eth0, eth1, eth2 …)

Basically it will assign fixed names based on firmware, topology, and location information making them stable between system reboots, hardware additions or removals and also between kernel or drivers updates.

For the upcoming SLE15, we are giving predictable network interface names a try (they are disabled in SLE12 and openSUSE Leap 42.x). For us that turned to be a problem because our AutoYaST testsuite dynamically creates new virtual machines on every system reboot (instead of really rebooting the virtual machine created in the previous step). So from the point of view of the operating system being tested, all the network devices are replaced by new ones in every reboot and that drives the network settings nuts.

That was only our case (arguably “our fault”), but there might be other situations in which going back to the old naming scheme (with names like ‘eth0’) would be more convenient than adapting the preexisting AutoYaST profiles to the new one. In such cases you still can use the old scheme (not fully predictable but very well known by Linux veterans) by just booting the SLE15 installation with this parameters. 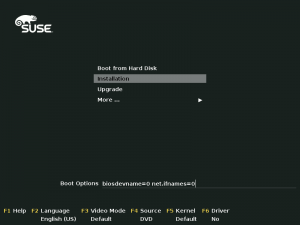 In addition to everything reported in this post, we have been working hard to get some new cool features to the upcoming SLE15 and to get the storage reimplementation full-featured enough to substitute the old one in all possible situations.

So, although it would still be summertime (in Europe), stay tuned for more news in two weeks.