While many activities around the world slow down, we are proud to say the YaST development keeps going at full speed.

While many activities around the world slow down due to the COVID-19 crisis, we are proud to say the YaST development keeps going at full speed. To prove that, we bring you another report about what the YaST Team has been working on during the last couple of weeks.

The releases of openSUSE Leap 15.2 and SUSE Linux Enterprise 15 SP2 are approaching. That implies we invest quite some time fixing bugs found by the testers. Many of them are not specially exciting but we still have enough interesting topics to report about:

This is not the first time our loyal readers learn about the YaST feature to search online for packages within SLE modules and extensions. We initially presented it three reports ago, followed by a review of several usability improvements we had decided to implement on top of that initial version.

But, as usual, SUSE’s QA department did a pretty good job forcing us to go one step further and provided us with useful information about how to improve the functionality. Apart from some minor bugs, they reported that there were important performance problems and that the UX could be improved.

The performance issues were annoying when working with big result sets. In one of our testing machines, it took several seconds to display the found packages after having received the list from the SUSE Customer Center. Moreover, scrolling through the results was rather slow too. Hopefully, those problems are gone now: most of the time is spent in network communication and scrolling works smoothly. 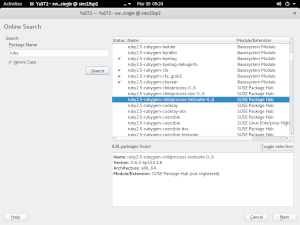 Regarding the UX, we introduced a few changes: 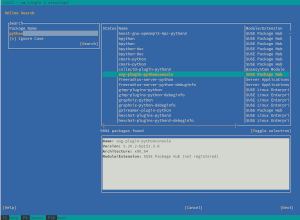 The Strange Case of the Multiple NTP Servers

YaST NTP allows to configure a list of NTP servers to use for synchronizing the date and time of the system. But one of our beloved users reported that a certain sequence of steps in the YaST Timezone module could ruin that list, reducing it to only its first entry. That was caused by a lack of consistency between both YaST modules.

YaST Timezone was designed a long time ago to, unlike YaST NTP, display and configure exactly one server. You may be asking, why can NTP be configured from YaST Timezone if there is an specific and more advanced YaST module for that purpose? The answer is that the YaST Timezone dialog is the only one available during installation, where it makes sense to offer the timezone and NTP configuration all together and with simplified options. 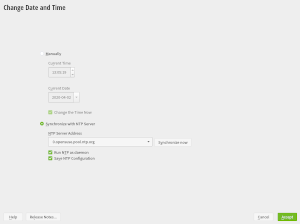 That simplicity also makes sense in an installed system for users with a basic configuration. But in systems with an advanced setup, we adapted that dialog to display the list of servers and to not offer any shortcut to adjust that configuration. Instead, the YaST Timezone dialog offers only a “Configure” button that opens the YaST NTP dialog, where the user can fine-tune the NTP configuration at will. 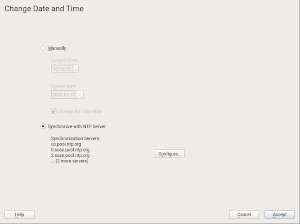 A couple of reports ago, we presented the initial support for zSeries Secure boot. We have continued improving that feature based on the feedback received from early testers and mainframe specialists.

Now, YaST behavior is better adapted to the characteristics of the system in which it’s been executed. We could go into details about each zSeries model and how YaST behaves based on its hardware configuration. But since an image is worth a thousand words, let’s just illustrate it with this new warning about z15+ requirement displayed when secure boot support is turned on.

The help texts and the information displayed in the installer proposal have also been adapted to better explain the consequences of the possible settings in YaST. Once again, let’s see it with an example image. 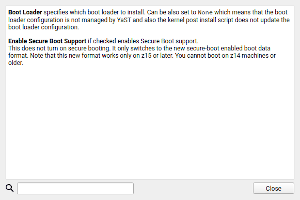 But, as you already know, this is not the only part of YaST we are improving step by step, one sprint after the other…

As part of our continuous effort to improve AutoYaST error handling and reporting capabilities (see this section of the previous report), we have added a new check for multi-devices technologies. Thus in case you are setting up an LVM volume group, a RAID, a Bcache or a multi-device Btrfs filesystem, AutoYaST makes sure that their components are also properly defined in the AutoYaST profile.

For instance, let’s say you want to set up a new LVM volume group but you forget to define which devices are going to act as physical volumes for it. In such a case, the new version of AutoYaST informs about the missing definitions and stops the installation.

In the image below you can see how the error reporting mechanism looks. In this example, it reports the AutoYaST profile contains a new multi-device Btrfs file system, but it does not specify which disks or partitions should be part of that file system. 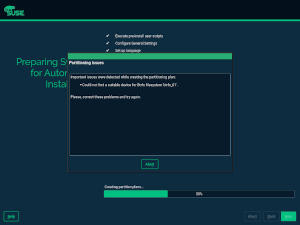 It’s all About Blocks

As mentioned in the previous section and as all our users know, YaST and AutoYaST can be used to define a software RAID in which several disks or devices are combined for extra performance, extra reliability or a combination of both.

The usual scenario is to combine similar disks. But the RAID technology in Linux is so advanced that it allows to combine disks with different block sizes into the same array. Thanks to a recent bug report, we realized YaST was not handling that situation in the best way. That leaded to a wrong estimation about the final size of the RAID device which, in turn, leaded to possible errors while creating partitions in it.

We have fixed the libstorage-ng code and its documentation, that now offers an accurate description on how the situation is handled in Linux and in our storage library.

Apart from the creation of the RAID itself, the YaST Partitioner also offers some related functionality that is very handy in setups with many disks. For example, the button “Clone Partitions to Other Device” that can be used to replicate the same initial layout in all the disks that are going to be subsequently combined using the RAID technology.

When using such button, the Partitioner tries to only offer destination devices that make sense. That means they have to be as least as big as the source device, they have to have the same topology, etc. But guess what! We found out it didn’t check for the block sizes. That is also fixed now and future versions of the Partitioner will not allow to clone a partition table into another disk with a different block size, something that would lead to failures in most cases.

And talking about storage devices, recently we got a bug report about AutoYaST not being able to install SUSE on an s390 mainframe. After checking the logs and all the information provided, we found out that the profile was basically wrong as it contained the following definition for a zFCP device:

Apart from the controller_id being missing, fcp_lun and wwpn look wrong too. So the profile is invalid, and there is nothing that AutoYaST can do about it. Done! Well, not that fast: the problem is that the profile was generated by AutoYaST itself.

We discovered that AutoYaST was wrongly identifying an iSCSI device as a zFCP one. So the profile excerpt above corresponds to an iSCSI device which, obviously, does not have any of those attributes.

A simple fix solved the issue and zFCP devices are now properly detected in openSUSE Tumbleweed and in the AutoYaST version that will be shipped with openSUSE Leap 15.2 and SLES-15-SP2.

We have reserved some development time also for learning and innovation. This part about reporting result of such a work.

Approving several dozens of pull requests in the GitHub web user interface is not easy or convenient so we have created a simple script which can approve the pull requests from the Linux command line. The tool is interactive, for each pull request is displays some details, the diff, the Travis status, etc… and then it asks for approval.

If you approve the request then it will approve it at GitHub with the usual “LGTM” (Looks Good To Me) message. If the request is not approved then you need to manually comment at the GitHub web UI why. Unfortunately there is no easy way for commenting a diff from command line…

As you can see, the bodies of the YaST Team members may be confined at home, but our minds are still out there, creating, fine-tuning and delivering software for you. And you can help us by testing the beta versions of openSUSE Leap 15.2 and SUSE Enterprise Linux 15 SP2 or just keeping your openSUSE Tumbleweed up to date and reporting any anomalous situation you find in YaST.

We will be back with more news in approximately two weeks. Meanwhile, have a lot of fun and take care of you and yours.