Time for another regular status update from the YaST team, with news about YaST itself and D-Installer

In the YaST Team we have changed a bit the way we organize the work and we are not longer numbering the development sprints. But that will not stop us from reporting as often as possible what’s new in the YaST world. So, let’s go with our second regular development report of 2022.

We are still in the beta phase of the development of SUSE Linux Enterprise 15-SP4 and openSUSE Leap 15.4, which means a significant part of our time is invested in debugging and fixing issues found by our testers. But we also keep introducing other changes and new features. Let’s go over some of them.

In the previous blog post we mentioned the new support for switching themes in the installer. As a cherry on top, we recently improved and partially automated the process to generate the corresponding SLE themes.

Regarding usability, we improved the behavior of the installer when the Release Notes contain external links.

We also tried to improve the visibility of a feature that has been available in AutoYaST for quite some time (initially announced at this blog post from 2020) but that we fear may have been overlooked by some of its potential users - the possibility to use ERB (Embedded Ruby) within the AutoYaST profiles. In that regard, we contributed quite some documentation and examples to the official AutoYaST documentation maintained by the awesome Documentation Team at SUSE.

On a more technical note, we introduced an automated check to detect if the YaST code contains method invocations that may be problematic in any of the different versions of Ruby supported by YaST. It may serve as inspiration for other Ruby developers needing to support different runtime environments.

As our main obligations permit, we continue progressing in our D-Installer side project that is already able to install an openSUSE system, configuring some basic aspects like the language or the partitioning layout. 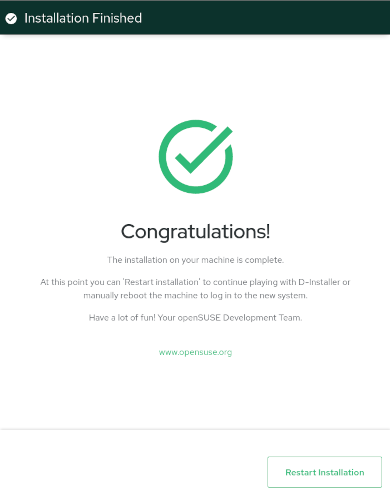 We are actively working to publish a couple of interesting bits in the upcoming weeks. On the one hand, a blog post detailing the current status, the involved technologies and the opportunities D-Installer may bring for the future. On the other hand, a live openSUSE image containing the new tool so everyone can give it a try by installing openSUSE Tumbleweed in any virtual or real machine.

This blog is a nice communication channel to keep you all informed about recent news and future plans, but we don’t want it to be the only way. We hope to see as many of you as possible in the upcoming openSUSE Conference 2022 in June. We plan to present quite some content in several talks (and maybe even some workshop) and we would like to encourage everyone to do the same. Beware the call for papers close in three weeks and time flies!