Kids started school in Prague, and we’re energized to bring you news from the YaST team.

This sprint we made progress in:

As always, the new storage stack deserves a separate section.

Selecting the base product in the first screen

But, as an (open)SUSE user, you may know that the first screen of the installer allows you to select the language/keyboard and, additionally, it shows the product’s license. But which license should we show for multi-product media?

After asking our UX expert, we decided to allow the selection of the product in the welcome screen as you can see in the image below.

Obviously, this behavior applies only to multi-product medias. When using a single product one, the license is shown directly in the welcome screen.

Finally, as developers, we would like to highlight that we mainly re-implemented the welcome screen using modern YaST techniques (like our object-oriented API to YaST widgets), improving test coverage and code quality.

Getting licenses from repositories

In the sprint 40 report, we announced that YaST was dropping support for SUSE tags because the plan is to use RPM metadata and packages to store all that information (licenses, release notes, etc.).

During this sprint (and the previous one) we focused on improving how base product licenses are handled. Until now, licenses lived in a tarball which was included in the installation media. But that is not the case anymore: now YaST relies on (the awesome) libzypp to get products licenses directly from the repositories. There are still some rough edges: for instance, multi-language support should be improved, but we will tackle them pretty soon.

Finally, bear in mind that only base product licenses have been adapted, but we plan to do basically the same for modules, extensions and add-ons.

The YaST installer supports displaying the README.BETA file from the installation medium. This file is added during Beta phase so the users know this is not the final release. This is also useful after the final product is released if you by mistake boot the old medium.

Unfortunately the original YaST code supported only the so called SUSE-Tags repository format which was used for the CD/DVD media. However, the new SUSE Linux Enterprise media will use the RPM-MD format which is something completely different.

In this sprint we have added the support for the RPM-MD format and additionally we display the Beta warning popup also in the AutoYaST installations. Of course, blocking AutoYaST with a popup would be a bad idea so in the AutoYaST mode the popup is automatically closed after a timeout. (The default is 10 seconds but can be configured in the XML profile.)

The drop of ReiserFS support for manual installation was announced in our last post, and now is the turn to autoupgrades.

With SUSE Linux Enterprise 15 the autoupgrade will be blocked in case of ReiserFS presence were detected suggesting a manual conversion to another filesystem. 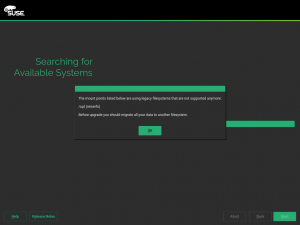 YaST guides you through the installation process of your system making you a proposal based on the different selections like the product, addons, system role, desktop etc.

This proposal contains some software patterns that are mandatory and some that are optional but only the mandatory ones will be reported when the proposal is shown.

During this sprint we solved a bug which reported not only missing mandatory patterns but also optional ones. 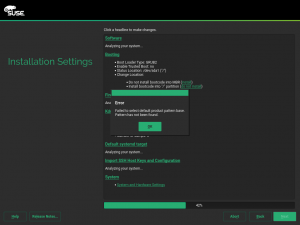 As you probably already know, in the YaST team we are rewriting our powerful expert partitioner tool from scratch to adapt it to the new storage layer. Sprint by sprint we are bringing back some of the many great features the expert partitioner offers, and this time it will not be different.

Now, when entering to the expert partitioner, all available storage devices are presented in an initial summary. Moreover, in this first screen you could find an option to rescan your devices, which allows the expert partitioner to be aware about the changes in your system, for example when you plug in a USB stick. 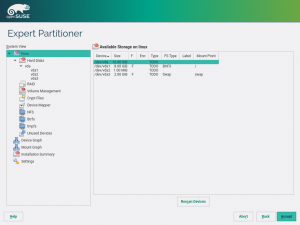 The management of Btrfs subvolumes was also improved during this sprint. Now, you will be alerted when a new subvolume is shadowed by an existing mount point. Moreover, some subvolumes could be automatically deleted or created when a mount point changes in the system.

We reintroduced one of the most important features about using Btrfs: Being able to create snapshots, so you can go back to a previous state of the system if anything went wrong during a package upgrade or when you changed anything about your system configuration. This means we are now again setting up and configuring snapper correctly, installing everything into a subvolume and creating an initial snapshot when the installation is complete.

Why install into a subvolume in the first place? When snapshots are made in the future (e.g., during package upgrade or installation) and at some point you decide to roll back to one of those snapshots, you might want to delete previous snapshots to save disk space. If we didn’t install into a subvolume, the initial files would always be left over and consume disk space, so there would be a considerable resource leak.

As you should know, one important part of the rewritten storage stack is the partitioning proposal. The old one was designed with a rather narrow scope in mind. Targeting desktops and old-school servers, it always proposes a root file-system, a swap volume and an optional separate /home. That’s not the most useful schema for new innovative products with a different focus like SUSE CaaS Platform, openSUSE Kubic, SUSE Manager, etc.

As we remind quite often, all the products supported by YaST (SLES, SLED, Leap, Tumbleweed, Kubic, CaaSP, SUSE Manager, SLES4SAP, you name it) share an identical installer. That installer is fully configurable using the file control.xml that is included in the media and that allows to define the sequence of installer steps, the default values and much more.

One of the goals of the new storage proposal is to give product creators and release managers more freedom and flexibility configuring the behavior of the guided setup. And for that we need a better format for control.xml, so they can express themselves with fewer limitations.

Of course, that new format is not something for the YaST team do decide on its own, but something being designed openly in collaboration with all the involved parties. To make easier for anyone to jump into the subject we have prepared this detailed document which includes all the present and historical information to understand the topic, as well as an explanation of the new format with several examples based on existing or hypothetical use cases.

As everything in YaST, that document is alive and expected to continue changing and evolving based on everybody’s feedback and contributions. So feel free to take a look and suggest improvements or future use cases we may have overlooked.

In our previous sprint report we told you we were working to integrate the new storage stack into the future SLE15 and openSUSE Leap 15 codebase. Now the submission process is over and the preliminary images of both future distributions are fully based on libstorage-ng. For openSUSE Tumbleweed, that is the Staging:E project. That means we now have many more eyes looking into it, finding bugs, pointing what is missing and providing feedback about the new behavior. Of course, every couple of eyes comes with a little bit more of pressure for the YaST Team to get things done as soon as possible, but also with a pair of hands to help us getting there.